The Theory of Evolution and Its Impact 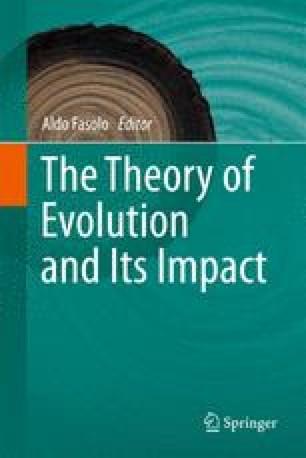 Theory of Evolution and Genetics

The main purpose of this contribution is to document the role of natural selection, a major factor in Darwinian evolution which is difficult to dissect specially in the case of human evolution. Recent major steps in human genetics can be summarized as follows: (a) the complete sequence of the human genome; (b) the Single Nucleotide Polymorphisms (SNP) discovery and characterization; (c) the HapMap Project; (d) the Human Genome Diversity Project (HGDP)-CEPH set-up of 1,000 world-wide cell lines publicly available; (e) the 1,000 genomes project; (f) The very recent draft DNA sequence of the Neanderthal Genome. An interesting advance from HGDP-CEPH genome-wide analyses on genetic diversity and population structure at the world-wide level (high resolution from technological advance allowing to type more than 500,000 SNP per individual) has been to resolve migration from adaptation and natural selection. The tests of selection used were: (a) iHS – detection of partial sweeps in the genome scenario from haplotype patterns; and, more traditionally, (b) Fst – differentiation of gene frequencies, calculated either globally or between broad geographic regions. Interestingly enough, the color of the skin problem originally pointed out by Charles Darwin in The Descent of Man, and Selection in Relation to Sex. p. 381, 1981 facsimile edition by Princeton University Press, has been elucidated by finding some related traits (SLC24A5, KITLG, MC1R) whose world geographic distribution shows how natural selection and geographic barriers are interacting. What makes us humans? The draft sequence of the Neanderthal genome (Green et al. 2010) surprisingly shows that the Neanderthal DNA signal can be found not only in the genomes of Europeans, but also in people from East Asia and Papua New Guinea, where Neanderthals never lived. Even more of interest, a catalogue of features unique to the human genome has been pointed out. Five genes affected by two substitutions that either change aminoacids or introduce a stop codon, and that have become fixed among humans since the divergence from Neanderthals have been identified. The start codon in the gene TRPM1 that is present in Neanderthals and chimpanzees has been lost in some present-day humans. The TRPM1 encode melastatin, an ion channel important for maintaining melanocyte pigmentation in the skin. It is intriguing that skin-expressed genes comprise three out of six genes that either carry multiple fixed substitutions changing amino acids or in which a start or stop codon has been lost or gained. This suggests that selection on skin morphology and physiology may have played an important role on the hominin lineage. The finding of 20 top candidate selective sweep regions adds further evidence on how the present technological advances are instrumental for resolving cases of natural selection in humans too elusive to be found by traditional genetic tools: the case of skull structure (cleidocranial dysplasia and RUNX2 gene) is mentioned. Eventually a challenging topic worth of further analyses, the sexual selection in humans, has been quoted from Charles Darwin in The Descent of Man, and Selection in Relation to Sex, pp. 605–606: in fact, his prophetical thinking has not been yet fully explored: “We cannot positively say that this character, but not that, has been thus modified; it has, however, been shown that the races of man differ from each other and from their nearest allies, in certain characters which are of no service to them in their daily habits of life, and which it is extremely probable would have been modified through sexual selection”.

Sexual Selection Single Nucleotide Polymorphism Modern Human Cleidocranial Dysplasia Human Genome Diversity Project
These keywords were added by machine and not by the authors. This process is experimental and the keywords may be updated as the learning algorithm improves.
This is a preview of subscription content, log in to check access.