Management of Disease in Wild Mammals 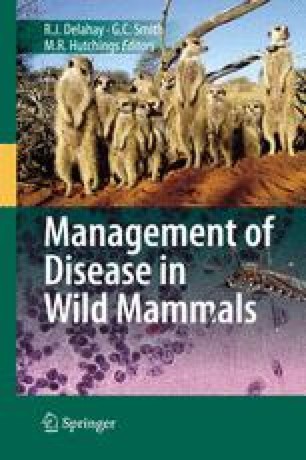 Management of Disease in Wild Mammals pp 1-8 | Cite as

The Science of Wildlife Disease Management

In its widest sense disease can be regarded as any impairment of normal functions. However, for the purposes of this book we will mostly restrict our discussion to infectious diseases, the agents of which are often described as parasites or pathogens. For convenience, these organisms are often split into two categories that reflect their broad characteristics, and their relative size. The macroparasites are multi-cellular organisms that live in or on the host, such as helminths and arthropods, while microparasites include viruses, bacteria, fungi and protozoa. The main functional differences between the two relate to their generation times, with microparasites exhibiting relatively higher within-host reproductive rates and shorter generation times than macroparasites. As a result microparasites are frequently associated with acute disease, although they can induce long-lived immunity to re-infection in recovered hosts. Macroparasites by contrast are more likely to produce chronic infections often characterised by short-lived immunity in heavily infected hosts, and re-infection. Macroparasites may also have distinct life stages that can survive outside the host (e.g. eggs or larvae) and sometimes require other host species to complete their life cycle. Two important groups of pathogens fall outside this classification: rogue proteins (prions) implicated in transmissible spongiform encephalopathies (TSEs) and infectious cancers, of which Tasmanian devil facial tumour disease is a well known example. However, in broad respects these are most usefully considered as microparasites, often producing acute clinical signs without host immunity.

Disease can affect individual hosts by reducing growth rates or fecundity, increasing metabolic requirements, changing patterns of behaviour and ultimately may cause death. Sub-lethal effects of pathogens may also enhance mortality rates by for example, increasing the susceptibility of the infected host to predation. However, the intimate relationships between hosts and parasites have in many instances evolved over time into subtle and potentially complex interactions, such that infection does not in itself necessarily lead to disease. Many parasites have little detrimental effect on their hosts for most of the time, only causing pathological damage if this delicate balance is upset, for example when the parasites become too numerous or when the immunological capability of the host is impaired. This balance could be influenced by many factors including nutrition, concomitant infections and a variety of physiological stressors.

Wildlife Population Transmissible Spongiform Encephalopathy Bovine Tuberculosis Wild Mammal Wildlife Disease
These keywords were added by machine and not by the authors. This process is experimental and the keywords may be updated as the learning algorithm improves.
Download to read the full chapter text