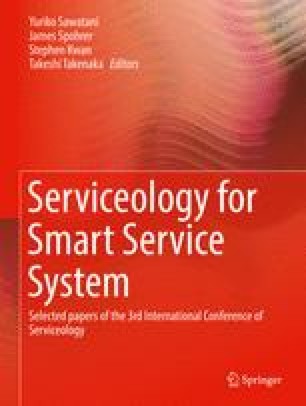 A Creed for Service Designers

Some recent discussions in the service science community have been around the need for research on and innovation of human-centered service systems (HCSS) from a multiple discipline perspective. HCSS are complex because of the involvement of people, multiple stakeholders with usually incommensurate value systems spanning networks of resources. Designers of such systems have to draw knowledge and connections from service science, system thinking, design thinking, business, and engineering. In this research, we build an underpinning of the system thinking aspect of service design based on Churchman’s The Design of Inquiring Systems and Swanson’s Churchman’s Theory of Design Integrity as an important aspect of the education of service designers. This will form the philosophical foundation of a creed or set of beliefs and aims that will guide the service designer’s actions. Of particular relevance to service system design is Swanson’s interpretation of Churchman’s work to propose a Theory of Design Integrity, i.e., designing the wholeness, soundness, and virtue of a system. A system professional can design such a system with precepts based on Churchman’s necessary conditions to conceive a system S: it is teleological; it has a measure of performance, a client whose interests (value) are served, teleological components, an environment, a decision maker of resources, and a designer with good intentions to maximize the system’s value to the client; and it is stable. Even though Churchman was not specifically referring to service systems, we see that his ideas are as fresh today as then in applying the precepts to value cocreation scenarios. The Theory of Design Integrity also explicitly offers a virtue component that is lacking in the current service design literature. We feel that this should be an essential part of a service designer’s creed in today’s climate of privacy and security concerns. Swanson also introduced the role of a social witness as an observer who evaluates the system’s design integrity by maintaining a critical and responsible stance not separable from the system. We will illustrate the applicability of the Creed for Service Designers with service system scenarios and describe how it could be incorporated into service design education.