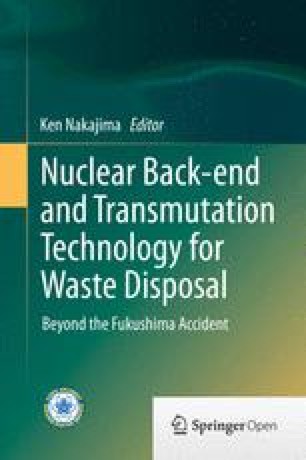 In fission products in used nuclear fuel, there are several stable isotopes that have a large neutron absorption effect. For evaluation of the neutronics characteristics of a nuclear reactor, the amount of such isotopes should be evaluated by using burn-up calculation codes. To confirm the correctness of such data obtained by calculation codes, it is important to assure the precision of the evaluation of the neutron multiplication factor of used nuclear fuel. However, it is known that there are several hardly measurable elements in such important fission products. Data for the amounts of the hardly measurable elements in used nuclear fuel are scarce worldwide.

The Japan Atomic Energy Agency (JAEA) had been developing a method to assess the amounts of these fission products that are hardly measurable and have a large neutron capture cross section, under the auspices of the Japan Nuclear Energy Safety Organization. In this work, a measurement method was developed combining a simple and effective chemical separation scheme of fission products from used nuclear fuel and an inductively coupled plasma mass spectrometry with high sensitivity and high precision. This method was applied to the measurement program for the used BWR 9 × 9 fuel assembly. This measurement method is applicable to the required measurements for countermeasures to the accident at the Fukushima Dai-ichi Nuclear Power Plant of Tokyo Electric Power Company (TEPCO). JAEA has a measurement plan for not only BWR but also PWR fuel.

This presentation describes the measurement method developed in the study as well as the future measurement plan in JAEA.

In fission products in used nuclear fuel, there are several stable isotopes that have a large neutron absorption effect. For evaluation of the neutronics characteristics of a nuclear reactor, the amounts of such isotopes should be evaluated by using burn-up calculation codes. For this purpose, a quantitative analytical method of uranium, plutonium, and fission products of spent fuels has been studied [1, 2]. However, it is known that there are several barely measurable elements in such important fission products.

To assay the amount of many fission products, radiation measurement is widely used. Cesium-134 and -137 are typical examples. However, this method is not applicable for isotopes that are important from the aspect of reactivity assessment because they are stable isotopes. For such isotopes, there is the possibility of adopting the isotopic dilution method (IDM), which has been used for measurement of actinides and a few fission products such as neodymium.

In the Japan Atomic Energy Agency (JAEA), thermal ionization mass spectrometry (TIMS) has been used for IDM to evaluate the burn-up value of the used fuel. TIMS is one of the most reliable instruments to determine the isotopic ratio and the obtained result is considered to be the reference. However, TIMS needs relatively large amounts of the fuel solution sample and a long time is required to obtain the final results after dissolution of the fuel and preparation of the measurement sample.

The most serious problem is that the important fission isotopes for the reactivity assessment belong to the rare earth elements. Because many of these have the same mass number, we need an efficient chemical separation method and high-performance instruments for measuring the isotopic composition that which should have high sensitivity and resolution. For this reason, the fission products important for reactivity assessment are barely measurable and available data for such fission products are scarce.

JAEA has been active in measuring the isotopic composition of the spent nuclear fuel from the 1980s and the obtained data have been archived in the SFCOMPO database [3], which has been supported by the OECD/NEA databank. Based on this past experience, JAEA launched a development program [4] of measurement of the fission products important for reactivity assessment under the auspices of the Japan Nuclear Energy Safety Organization (JNES) in 2008 and successfully finalized the program in 2012.

In this program, a combined method of chromatographic separation of uranium, plutonium, and fission products from irradiated nuclear fuels was developed. Furthermore, by the introduction of high-resolution inductively coupled plasma mass spectrometry (HR-ICP-MS), the IDM has been applied to lanthanide nuclides. The developed method was applied to the measurement of isotopic composition of used BWR 9 × 9 fuel and evaluation of the burn-up calculation code was carried out [5].

After the accidents at Fukushima Dai-ichi Nuclear Power Plants (hereafter referred to as 1F) of Tokyo Electric Power Company (TEPCO) in 2011, we need a confirmed method to assay the composition of the fuel irradiated in 1F to carry out decommissioning of the Fukushima site. For this purpose, JAEA has a further measurement plan of not only BWR but also PWR used fuel to obtain enough experience to measure the isotopic composition of the irradiated nuclear fuels.

This report summarizes the analytical procedure to measure the amount of fission products isotopes developed in JAEA and the future measurement program.

We decided to adopt the isotopic dilution method (IDM) and the calibration curve method to measure the amounts of the stable fission products. For this purpose, we introduced the high-resolution inductively coupled plasma mass spectrometry (HR-ICP-MS), ELEMENT2 of Thermo Fisher Scientific (Photo 6.1). This instrument has very high sensitivity and enough precision and accuracy to measure the isotopic ratios of objective elements belonging to the rare earth elements.
In this technical development, five samples taken from ZN2 (average burn-up is 35.6 GWd/t) and ZN3 (average burn-up is 53.5GWd/t) fuel assemblies of used fuel of Fukushima Dai-ni Nuclear Power Plant Unit 1 (2F-1) were used for demonstrating the measurement method. Sample positions are shown in Figs. 6.1, 6.2, and 6.3. Five fuel samples taken from ZN2 and ZN3 fuel assemblies were dissolved initially in 3 M nitric acid solution at about 110 °C, then the dissolution residue was dissolved again in mixed solutions of nitric, hydrochloric, and sulfuric acid at 180 °C.
Before the measurement of isotopic ratio, the isobar should be separated to avoid contamination. Figure 6.4 shows a schematic of chemical separation. The dissolution solutions of spent fuels were filtrated and the filtrate solution was fed to an anion-exchange resin of UTEVA (Eichrom, USA) to separate U, Pu, and Nd individually. Figure 6.5 shows the yields of lanthanide in each fraction eluted from the Ln resin column in the separation experiment using a simulated dissolution solution of spent fuel. U and Pu in the solution were effectively separated from the solution with more than 95 % efficiency. The eluate solution from the UTEVA resin column was fed to the Ln resin column. Lanthanides elements were separated with hydrochloric acid solutions in the Ln resin column.

Initially, this measurement technique and procedure have been developed to obtain experimental data for the demonstration of the neutronics calculation code. However, after the accident at the Fukushima Dai-ichi Nuclear Power Plant in 2011, it is recognized that the measurement of the isotopic composition of the used nuclear fuel is crucial to take countermeasures to the accident. We expect that measurement of the amounts of many varieties of isotopes is required for the decommissioning of the Fukushima Dai-ichi site.

JAEA will also assay the isotopic composition of spent nuclear fuel irradiated in PWR. It is planned to measure the isotopic compositions of nine samples taken from NO4F69 fuel assembly irradiated in Ohi Nuclear Power Station unit 4 of the Kansai Electric Power Co., Inc. (KEPCO). The nine PIE samples will be taken from three fuel rods including UO2 and UO2-Gd2O3 whose average burn-up values are estimated to be from 40 to 57 GWd/t approximately. This measurement campaign was started in 2013, and the first results are hoped to be seen in 2014.

The Japan Atomic Energy Agency had been active in the field of postirradiation examinations since the 1980s. Based on past experience and introducing the state-of-the-art technique, JAEA began a measurement program of fission products that are important for reactivity assessment. By this program, the quantitative analytical method based on isotopic dilution technology has been developed for fission products in spent fuels. JAEA will carry out the measurement program of isotopic composition of the used nuclear fuel for countermeasures to the accident at Fukushima Dai-ichi Nuclear Power Station. This program consists of the measurement of several samples not only from BWR but also PWR. The obtained results will be used for the evaluation of the burnup code system. Also, the experience of treating spent fuel and measuring its isotopic composition will strengthen the technical ability of JAEA for providing countermeasures for the Fukushima accident.