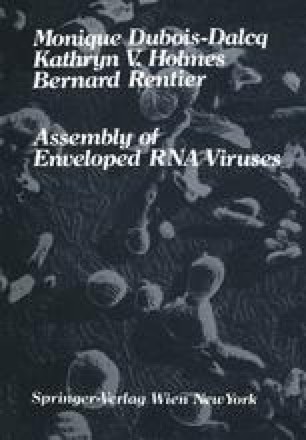 Retroviruses are widely distributed among vertebrate species, can be transmitted horizontally and vertically, require RNA-directed DNA synthesis for their replication, and are natural agents of oncogenesis in several species (Bishop, 1978). The virion is about 100 nm in size, contains a coiled Strand of RNA complexed to proteins (NC), which forms a crescent structure during budding and a dense core after release, and has an envelope bearing Clusters of spikes or knobs (Fig. 9–1). The most extensively studied retroviruses are of avian and murine origin, but retroviruses also exist in feline and bovine species, as well as in primates. The prototype avian retrovirus is avian sarcoma virus (ASV), whereas there are two prototypes of murine retroviruses, murine leukemia virus (MuLV), and mouse mammary tumor virus (MMTV). There are also retroviruses in sheep called “lentiviruses”; one of them is visna virus which causes a slow encephalitis in sheep (Haase, 1975). The prototype non-human primate virus is MPMV (Mason-Pfizer monkey virus). More recently, a new group of retroviruses has been isolated from human T cell leukemia (reviewed in Gallo and Wong-Staal, 1982). Since less information is available on the molecular structure and synthesis of primate retrovirus polypeptides, they will not be covered in the first section of this chapter. In most cases, retroviruses are not cytopathic and do not have dramatic effects on cellular metabolism.

Long Terminal Repeat Mouse Mammary Tumor Virus Virus Component Avian Sarcoma Virus Friend Leukemia Virus
These keywords were added by machine and not by the authors. This process is experimental and the keywords may be updated as the learning algorithm improves.
Download to read the full chapter text