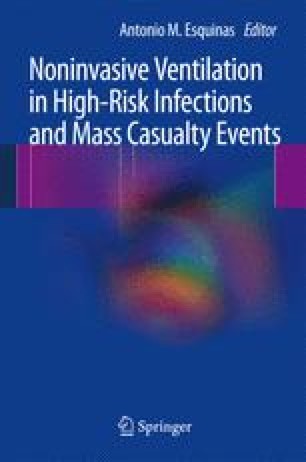 The first cases of the novel influenza A(H1N1) virus were reported in April 2009, especially in Mexico and the United States [1, 2]. The disease spread rapidly, becoming a pandemic by June 2009. On August 21, 2009, a total of 177 reported cases of novel influenza 182.166 A(H1N1) infection, of which 1,799 were fatal [2]. It has been observed in animal studies that the novel influenza virus A has a high replication rate in lung tissue, with a great capacity to invade the lower respiratory tract in humans, causing especially acute fulminant respiratory failure.

The first cases of the novel influenza A(H1N1) virus were reported in April 2009, especially in Mexico and the United States [1, 2]. The disease spread rapidly, becoming a pandemic by June 2009. On August 21, 2009, a total of 177 reported cases of novel influenza 182.166 A(H1N1) infection, of which 1,799 were fatal [2]. It has been observed in animal studies that the novel influenza virus A has a high replication rate in lung tissue, with a great capacity to invade the lower respiratory tract in humans, causing especially acute fulminant respiratory failure.

Studies on the management of patients with ARF and infection with novel H1N1 influenza are based on the most severe form of respiratory failure, multiple pulmonary infiltrates, PaO2/FiO2 > 200, and even severe multiple organ damage.

Novel H1N1 influenza infection is a disease whose lethality is based on the presence of progressive ARF for 48–72 h after presentation of the disease. Hence, there is a period during which the disease is becoming established and therefore when early intervention could halt its progression, thereby reducing its morbidity and mortality.

The European Respiratory Society (ERS) and the European Society of Intensive Care Medicine (ESICM) stated that noninvasive mechanical ventilation (NIMV) [4] should not be considered a treatment for hypoxemic ARF secondary to a pandemic and likely to progress to ARDS. The main reasons NIMV should not be considered the first line of treatment are the following: (1) It has poor clinical efficacy regarding severe ARF that rapidly progresses to ARDS. (2) Patients infected with the novel influenza A(H1N1) virus have more heterogeneous hypoxemic ARF than patients with hypercapnic respiratory failure. (3) Aerosol particles released by NIMV expand and spread the infection.

The use of NIMV can be justified, however, to avoid endotracheal intubation in certain cases. The types of the ARF for which NIMV can be prescribed are in patients who are experiencing exacerbation of chronic respiratory lung diseases, such as asthma or COPD, and other chronic respiratory disease, bacterial pneumonia secondary to infection with novel influenza A(H1N1), and mild viral pneumonitis (PaO2/FiO2 > 200).

Hajjar et al. [5] treated five patients (62.5 %) who required invasive mechanical ventilation during the first 24 h after ICU admission. NIMV was useful in three of the patients (37.5 %), each of whom had a mild form of the disease assessed by computed tomography. Estenssoro et al. [6] used NIMV in 64 patients (19 %) with good results in patients with mild to moderate disease.

Briones Claudett et al. [7] reported two patients who required noninvasive ventilation (NIV) with favorable results. NIMV was initiated using bilevel positive airway pressure (BIPAP) mode S/T (spontaneous/timed) with a respiratory rate of 15. It had a programmed tidal volume (Vt) of 200 ml exhaled for a 42-kg patient and 300 ml for a 60-kg patient, each infected with influenza A novel associated H1N1 and chronic lung disease. The average volume-assured pressure support (AVAPS) ventilatory strategy was useful in patients with COPD exacerbation, infection, asthma, and those with mild forms of novel influenza A(H1N1) infection. The S/T-BIPAP + AVAPS ventilation strategy allows a fixed preset tidal volume that is maintained constant under inspiratory pressure variations. (BiPAP S/T) with average volume assured pressure support (AVAPS) allows for setting a fixed tidal volume, and the system output automatically adjusts based on variations in inspiratory pressure to ensure the predetermined target value. The initial ventilatory parameters must be programmed in mode BIPAP-S/T + AVAPS with an inspiratory pressure (IPAP) of 18–26 cmH2O and a minimum of 12 applications scheduled as well as positive expiratory pressure (EPAP) of 6–8 cmH2O for a programmed tidal volume corresponding to 45.5 + 0.91 (height in cmt – 152.4). 8–10 ml/kg body weight per patient. Were given supplements O2 via an adapter circuit close to the facemask in order to maintain SaO2 above 94 % (Fig. 15.1).

The Sociedad Española de Medicina Intensiva, Crítica y Unidades Coronarias (SEMICYUC) drew up recommendations regarding the use of NIV during the pandemic that followed the 2010–2011 epidemic. It stated that it is not advisable to use noninvasive ventilation in patients who require respiratory support where there is high suspicion of infection with the new influenza virus A(H1N1) [8]. The reason for this recommendation is the risk of its generating aerosols, which increase the risk of transmission to health care workers. Also, it usually contributes to a poor clinical outcome in these patients. Before deciding to use NIMV, the risk-benefit ratio should be assessed, especially considering certain aspects, shown in Table 15.1.
Table 15.1

The ERS/ESICM recommend avoiding NIMV. Instead, they recommend intubating patients infected with the new H1N1 virus who have been admitted to an intensive care unit (ICU) with severe hypoxemia that rapidly develops into ARDS, multiple organ failure, and refractory hypoxemia. NIMV should be considered only for patients with moderate hypercapnic ARF secondary to exacerbation of a chronic respiratory disorder, ARF secondary to acute pulmonary edema, or ARF after extubation secondary to ARDS due to H1N1 virus infection. (Fig. 15.2).

There are some reports in the literature of using NIMV in patients with novel influenza A(H1N1) infection. Winck and Marinho [9] described a 53-year-old patient who underwent NIV (BiPAP Vision; Philips Respironics, Murrysville, PA, USA) with an orofacial mask in a bilevel mode with inspiratory pressure (IPAP) of 16 cmH2O and expiratory pressure in the airway (EPAP) of 8 cmH2O that was initiated and then switched to continuous positive pressure airway (CPAP) of 10 cmH2O with FiO2 at 25 %. After 1 h, the PaO2/FiO2 increased to 364, and CPAP was discontinued 12 h later.

Miller et al. [11] reported 13 patients on NIMV, but 11 of them were intubated within a median of 7.9 (IQR 2.8–20.8) hours. Krumar et al. [12] reported 136 patients (81.0 %) who were mechanically ventilated the first day of ICU admission. Among them, 128 (76.2 %) underwent IMV and 55 (32.7 %) NIMV. In all, 47 of the NIMV patients (85.4 %) were switched to IMV. There was another report of a small number of patients, with 5 of the 10 patients having pneumonia and hypoxemic failure. NIMV was 100 % effective in terms of improving oxygenation and avoiding intubation. It should be noted, however, that these patients had only respiratory failure when starting the NIMV, with no other organs compromised [23].

For patients who present with severe disease, it is prudent to perform early intubation and/or admission to the ICU given the rapid progression in these cases. NIMV has little success here. During the pandemic it was reported that NIMV was used in 25–45 % of patients, with a 75 % failure rate [3, 12, 13].

In the Canadian experience, approximately 30 % of patients were admitted to the ICU and underwent NIMV. Altogether, 85 % of them required subsequent intubation and invasive ventilation. Given the high failure rate and duration of ventilatory support, routine use of NIMV in patients with H1N1 should be avoided. The reasons for failure of NIMV in this population may be that the patients almost uniformly present with hypoxemic respiratory failure and normal PaCO2. Furthermore, improvement and resolution of H1N1 pneumonitis is generally slow, so NIVM may be less useful.

Three studies addressed the use of high levels of PEEP with low tidal volume: EXPRESS, LOVs, and ALVEOLI [16, 17, 18]. In the LOVS study, the authors compared 10 vs. 16 cmH2O of PEEP in patients who had low tidal volume. Amato et al.’s patient group was employed as the controls. The EXPRESS study employed the ARDS Network protocol control group and compared PEEP levels of 7 vs. 15 cmH2O. Mortality was similar in the three studies. In the ALVEOLI study clinical outcomes were similar whether lower or higher PEEP levels were used. A recent meta-analysis [19] examined three trials involving 2,299 patients and demonstrated that high PEEP levels was not associated with improved hospital survival. This protective ventilatory strategy has traditionally been associated with reduced mortality. It should be noted, however, that several recent meta-analyses of randomized trials using ventilatory strategies to protect the tidal volume in the lungs demonstrated that it is not the most important parameter. They concluded that the driving pressure is the difference between the plateau pressure and PEEP during controlled ventilation, which is therefore the most important parameter to optimize [20].

A prospective cohort study in Ecuador included 24 ARDS patients. It was highly suspected that the ARDS was caused by influenza A(H1N1) [22]. The patients had a mean PaO2/FiO2 of 112 ± 34 and a mean APACHE II score of 18.83 ± 5.1. The patients were treated using maximizing recruitment maneuvers. The reported ICU mortality was 16.6 %.

Alternative modes of ventilation—placing the patient in a prone position or applying high-frequency oscillatory ventilation, release airway pressure ventilation (APRV), or high-frequency ventilation (HFV)—may improve oxygenation in intubated patients. APRV is a time-triggered, pressure-cycled ventilation mode that allows spontaneous breaths throughout the respiratory cycle. It has been widely used in patients with ARDS and has been observed to improve oxygenation. It also reduces the need for sedation and paralysis. During APRV, pressure in the airway is scheduled on two levels called Phigh and Plow and into two periods called Thigh and Tlow. They are analogous to inspiratory pressure, PEEP, inspiratory time, and expiratory time, respectively. There are no conclusive data pertaining to whether APRV improves or worsens the results in patients with lung injury, particularly because the combination of pressure and the controlled mode can produce unpredictable spontaneous breaths and tidal volumes. It is known that high tidal volumes are associated with worse ARDS outcomes [24].

Sundar et al. [25] found that 11 of 14 patients had refractory hypoxemia despite APRV application. However, by combining the use of APRV with placing the patient in a prone position reduced mortality by 27.3 % (3/11). The authors concluded that the prone position combined with APRV improves oxygenation and limits organ dysfunction in patients with ARDS due to novel influenza A(H1N1).

The Spanish Working Group on Influenza A (SEMICYUC) noted that 75–90 % of patients who require mechanical ventilation and had severe hypoxemia require rescue treatment how: inhaled nitric oxide, high-frequency ventilation, or membrane oxygenation by extracorporeal circulation.