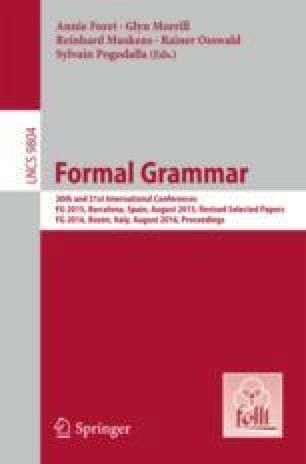 Movement is the locus of power in Minimalist grammars (MGs) but also their primary source of complexity. In order to simplify future analysis of the formalism, we prove that every MG can be converted into a strongly equivalent MG where every phrase moves at most once. The translation procedure is implemented via a deterministic linear tree transduction on the derivation tree language and induces at most a linear blow-up in the size of the lexicon.

A Specification of SMNF Transducer

We now define a non-deterministic linear bottom-up tree transducer that brings Minimalist derivation trees into SMNF. The transducer is almost non-deleting as it only deletes intermediate Move nodes. Consequently, it can be regarded as the composition of a non-deterministic relabeling and a deterministic transducer that deletes Move nodes marked for removal. Before moving on, we introduce an additional piece of MG notation. In a standard MG, every useful LI must be of the form \(\gamma c \delta \), where \(\gamma \) is a string of licensor and selector feature, c is a category feature, and \(\delta \) is a string of 0 or more licensee features. Given a feature component s, m(s) is obtained from s by removing all Merge features. We overload m such that for every LI Open image in new window

The SMNF transducer has to handle three tasks in parallel: (i) detect and delete intermediate Move nodes, (ii) modify the feature components of LIs, and (iii) ensure that each licensee feature is subscripted with the smallest possible natural number. Consequently, each state has a tripartite structure

such that \(n \le \mu \) (the upper bound on the grammar’s traffic), \(u_i\) keeps track of the unchecked Move features of some LI l, \(m_i\) records how m(l) was modified, and \(I_i\) stores which required indices have not been encountered yet. More precisely: for each \(u_i\) there is some LI l with \(u_i\) a suffix of m(l); \(m_i\) is a string of indexed Move features and the distinguished symbol \(\Box \) such that removal of indices and \(\Box \) yields a subsequence of m(l) including the final licensee feature; and \(I_i\) is some subset of the closed interval \([0, \mu -1]\) of natural numbers. Among all these states, the only final state is the empty state \(\left\langle \right\rangle \).

While the transducer has a large number of rules, they can easily be compressed into a few templates using algebraic operations. First, we define a non-deterministic relabeling \(\ell \) operating on MG feature strings that preserves all Merge features and either deletes Move features or relabels them:
We extend \(\ell \) to LIs: if Open image in new window

The Move rules have to handle most of the work in the transducer. First, they have to delete movement features in the top component and use this information to decide whether the Move node is final or intermediate. Licensor features in the second component must also be removed, and the same goes for licensee features if the Move node is final. In the latter case, the index of the checked licensee feature is removed from all other index sets. Checking of a licensee feature, in turn, is only possible if its index set is empty.

Note that since the transducer is restricted to well-formed derivation trees, at most one component of a state can contain licensor features. Similarly, the SMC prevents any two \(u_i\) from starting with the same licensee feature, so the indices j and k in the template are always uniquely identified.

A few clarifying remarks may be in order. First, note that the transducer always halts if it finds a case of intermediate movement but did not delete the corresponding licensor feature earlier on. This is enforced by \(m_j\) starting with \(\Box \). Second, the index set \(I_j\) is not updated for final movement. That is because the corresponding LI has not started to move yet, so its index set is not active yet. If \(I_j\) were updated, then an LI that licenses \(f_2\) movement would be allowed to undergo \(f_3\) movement even if \(f_2\) movement is possible, too.