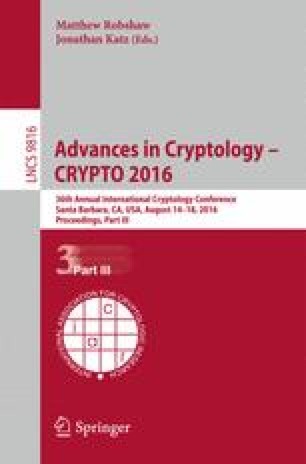 We construct the first UC commitment scheme for binary strings with the optimal properties of rate approaching 1 and linear time complexity (in the amortised sense, using a small number of seed OTs). On top of this, the scheme is additively homomorphic, which allows for applications to maliciously secure 2-party computation. As tools for obtaining this, we make three contributions of independent interest: we construct the first (binary) linear time encodable codes with non-trivial distance and rate approaching 1, we construct the first almost universal hash function with small seed that can be computed in linear time, and we introduce a new primitive called interactive proximity testing that can be used to verify whether a string is close to a given linear code.

A major part of this work was done while Ignacio Cascudo and Nico Döttling were also with Aarhus University.

The authors acknowledge support from the Danish National Research Foundation and The National Science Foundation of China (under the grant 61361136003) for the Sino-Danish Center for the Theory of Interactive Computation and from the Center for Research in Foundations of Electronic Markets (CFEM), supported by the Danish Strategic Research Council.

In addition, Ignacio Cascudo acknowledges support from the Danish Council for Independent Research, grant no. DFF-4002-00367.

Nico Döttling gratefully acknowledges support by the DAAD (German Academic Exchange Service) under the postdoctoral program (57243032). While at Aarhus University, he was supported by European Research Council Starting Grant 279447. His research is also supported in part from a DARPA/ARL SAFEWARE award, AFOSR Award FA9550-15-1-0274, and NSF CRII Award 1464397. The views expressed are those of the author and do not reflect the official policy or position of the Department of Defense, the National Science Foundation, or the U.S. Government.

The authors thank the anonymous reviewers of CRYPTO 2016 for their comments, which contributed to improve the paper. 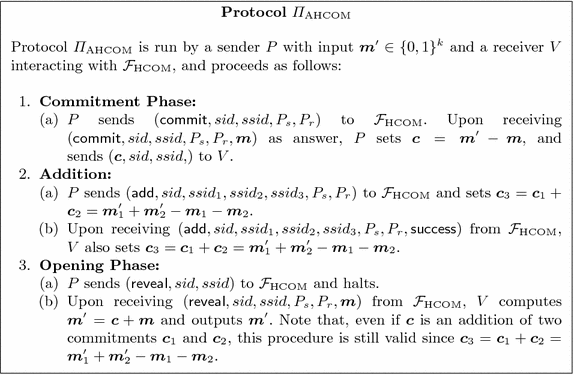 We adopt description of the Universal Composability (UC) framework given in [CDD+15]. In this framework, protocol security is analyzed under the real-world/ideal-world paradigm, i.e. by comparing the real world execution of a protocol with an ideal world interaction with the primitive that it implements. The model has a composition theorem, that basically states that UC secure protocols can be arbitrarily composed with each other without any security compromises. This desirable property not only allows UC secure protocols to effectively serve as building blocks for complex applications but also guarantees security in practical environments where several protocols (or individual instances of protocols) are executed in parallel, such as the Internet.

In the UC framework, the entities involved in both the real and ideal world executions are modeled as probabilistic polynomial-time Interactive Turing Machines (ITM) that receive and deliver messages through their input and output tapes, respectively. In the ideal world execution, dummy parties (possibly controlled by an ideal adversary \(\mathcal {S}\) referred to as the simulator) interact directly with the ideal functionality \(\mathcal {F}\), which works as a trusted third party that computes the desired primitive. In the real world execution, several parties (possibly corrupted by a real world adversary \(\mathcal {A}\)) interact with each other by means of a protocol \(\pi \) that realizes the ideal functionality. The real and ideal executions are controlled by the environment \(\mathcal {Z} \), an entity that delivers inputs and reads the outputs of the individual parties, the adversary \(\mathcal {A}\) and the simulator \(\mathcal {S}\). After a real or ideal execution, \(\mathcal {Z} \) outputs a bit, which is considered as the output of the execution. The rationale behind this framework lies in showing that the environment \(\mathcal {Z} \) (that represents all the things that happen outside of the protocol execution) is not able to efficiently distinguish between the real and ideal executions, thus implying that the real world protocol is as secure as the ideal functionality.

In addition to these two models of computation, the UC framework also considers the \(\mathcal {G}\)-hybrid world, where the computation proceeds as in the real-world with the additional assumption that the parties have access to an auxiliary ideal functionality \(\mathcal {G}\). In this model, honest parties do not communicate with the ideal functionality directly, but instead the adversary delivers all the messages to and from the ideal functionality. We consider the communication channels to be ideally authenticated, so that the adversary may read but not modify these messages. Unlike messages exchanged between parties, which can be read by the adversary, the messages exchanged between parties and the ideal functionality are divided into a public header and a private header. The public header can be read by the adversary and contains non-sensitive information (such as session identifiers, type of message, sender and receiver). On the other hand, the private header cannot be read by the adversary and contains information such as the parties’ private inputs. We denote the ensemble of environment outputs that represents the execution of a protocol \(\pi \) in a \(\mathcal {G}\)-hybrid model as \(\mathsf {HYBRID}^{\mathcal {G}}_{\pi , \mathcal {A}, \mathcal {Z}}\) (defined analogously to \(\mathsf {REAL}_{\pi , \mathcal {A}, \mathcal {Z}}\)). UC security is then formally defined as:

We say that the protocol is statistically secure if the same holds for all \(\mathcal {Z} \) with unbounded computing power.

, constructs \(\mathbf {S}\) according to the protocol and sends \((b_1,\ldots ,b_n),\mathbf {S}\) to \(\mathcal {F}_{\mathrm {ROT}} \). Basically, the ideal and the real distributions are computationally indistinguishable due to \(\mathsf {prg}\)’s pseudorandomness, i.e. an environment \(\mathcal {Z} \) that distinguishes between the ideal and real distributions could be used to distinguish a pseudorandom string output by \(\mathsf {prg}\) from a uniformly random string of same size.