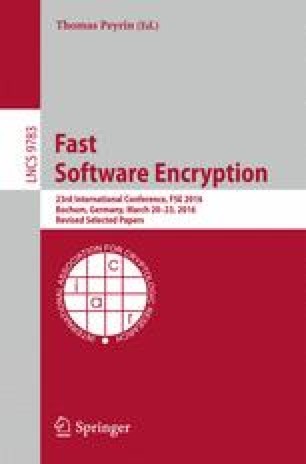 Recently, the designing and improving of hardware efficiency become a major trend. Several lightweight block ciphers [5, 7, 11, 24] and lightweight hash functions [2, 6, 10] are designed to minimize the implementation cost. Notably in the hash function PHOTON [10], a new type of MDS matrices that can be computed recursively were proposed, so-called serial matrices, where a serial matrix A of order k is raised to power k and the resultant matrix \(A^k\) is MDS. In comparison to round-based implementation, serial-based implementation trades more clock cycles for lesser hardware area requirement. Such matrices were later used in block ciphers like LED [11] and more recently in authentication encryption scheme like the PRIMATEs [1].

In a nutshell, a round-based implementation computes the entire diffusion matrix of order k and applies the diffusion layer in one clock cycle. Hence, it is necessary to have all, if not most, of the \(k^2\) entries of the diffusion matrix to be lightweight. On the other hand, a serial-based implementation computes the non-trivial row of a serial matrix1, and applies it for k times recursively. Therefore, the primary implementation cost is the k entries of the non-trivial row and the computation time takes k clock cycles. Although it is natural to perceive that these two implementations require very different matrices, there are a type of matrices that can achieve the best of both worlds—circulant matrices.

One approach to build lightweight MDS matrices from some matrix type is to focus on some subclass of such matrices that are MDS, based on some pre-defined metric for lightweight, then pick the lightest MDS matrices from this subclass. In [13, 16], the authors chose to maximise the number of 1’s for better efficiency and constructed circulant-like matrices that are MDS with as many 1’s as possible, then searched for the lightest MDS circulant-like matrices. In another work [12], the authors quantified lightweight with low Hamming weight and focused on involutory (self-inverse) matrices, they proposed the construction of Hadamard-Cauchy matrices that are MDS and can be involutory, then minimized the Hamming weight of a few entries of the Hadamard-Cauchy matrices. Although this approach is efficient for finding lightweight MDS matrices, the matrices found are optimal among the subclasses rather than the whole population of the matrix type.

Another approach is to pick the lightest matrix from some matrix type and check for MDS, and extend the search to the next lightest matrix if it is not MDS. This approach, also often regarded as exhaustive search, can be seen in [17, 22]. The clear advantage of the exhaustive search over the previous approach is that it guarantees optimal for the given matrix type. In addition, it has the freedom to change the metric for lightweight when necessary. Despite the advantages, this approach suffers from the large search space. In [22], the authors tackled this problem by introducing the concept of the equivalence classes of Hadamard matrices to significantly reduce the search space for finding lightweight involutory MDS (IMDS) matrices. However, the equivalence relation for circulant matrices has not yet been discovered in the literatures.

In this section, we first state some notations that will be frequently used for the rest of the paper. Next, we formally define what branch number of a matrix is, and provide two propositions that will be useful in the later proofs. Lastly, we give an introduction to circulant matrix, the advantages of using it and how the implementation of circulant matrix can be serialized. In this paper, we assume that the matrices are square matrices unless otherwise stated.

2.2 Branch Number of the Diffusion Layer

That is to say, for any nonzero input and output pair of a diffusion matrix, the number of nonzero components will be at least the branch number of the diffusion matrix. This is essential for protecting against the cryptanalysis like differential attack that exploits the differential patterns between the plaintext and the ciphertext. As the sum of nonzero components is lower bounded by the branch number, having a high branch number implies that a small input difference will inevitably lead to a large output difference, and to achieve a small output difference would require a large input difference.

[23]. A maximum distance separable (MDS) matrix of order k is a matrix that attains the optimal branch number \(k+1\).

The following propositions are simple yet crucial building blocks for the results in this paper.

For any permutation matrices P and Q, the branch numbers of these two matrices M and PMQ are the same.

Since P and Q are permutation matrices, there can be bijection mappings between the input vectors (resp. output vectors) of M and PMQ where the vectors differ by some permutation, hence the minimum number of nonzero components in the input and output pairs remains the same and they have the same branch number.    \(\square \)

2.3 Circulant Matrices and Its Implementation

There are several advantages of using circulant matrix in a diffusion layer:

There are mainly two challenges in the method of picking the lightest circulant matrix and checking the MDS property. Firstly, for a generic (not considering the values of the entries) circulant matrix of order k, \(\text {circ}(c_0, c_1, ..., c_{k-1})\), there are k! ways to permute the entries, which can quickly be intractable. Secondly, the choice of the k lightweight nonzero entries need not be distinct, which potentially cause the search space to be much larger than just choosing k distinct entries and permuting them.

Given a matrix M of order k that is defined by its first row under a rule, we denote by \(M^\sigma \) the matrix generated under the same rule by the first row of M modified by applying an index permutation \(\sigma \).

We first analyze what index permutation satisfies the relation, then we deduce the number of equivalence classes of circulant matrices.

In short, this section proves the following theorem.

First, we state two lemmas that will help us in proving Theorem 2.

Generalized Circulant Matrices. Recall from Sect. 2.3 that to serialize the implementation of a matrix, the same permutation is applied to obtain each subsequent row. Hence, we generalize the circulant structure by considering other permutations beside the right rotation.

Since there are \((k-1)!\) cycles of length k, it is infeasible to analyze every single the cyclic structures. However, using Proposition 2 and elementary group theory, we can elegantly reduce the problem to simply analyzing the circulant matrices. First, observe that the permutation \(\rho \) is an element of the symmetric group \(S_k\), and the collection of the permutations of the k rows of the matrix forms a cyclic group, hence the name cyclic matrices.

Relation to Circulant Matrices. Next, we show that any cyclic matrix is permutation-equivalent to some circulant matrix. More preciously, there is a bijection between the cyclic and circulant matrices satisfying \(\sim _\mathcal {B}\). To prove this, we use the following proposition from elementary group theory.

That is to say, there exists permutation \(\sigma \in S_k\) such that \(\sigma \rho = \tau \sigma \). In the nutshell, \(\sigma \) can be computed by placing one permutation above the other and view it as a Cauchy’s 2-line notation for permutation.

Given an ordered set S with k elements and some cyclic matrix structure, there exists a bijection between the cyclic matrices and the circulant matrices satisfying the relation \(\sim _\mathcal {B}\), where both sets of matrices are generated by some index permutation on S.

Any cyclic matrix corresponds to some circulant matrix preserving the coefficients and the branch number.

This is immediate from Theorem 3 and the fact that their entries are the same up to some permutation. In addition, we can draw the following corollary immediately from Theorems 2 and 3.

There are different ways to define lightweight/efficient. For instance in AES, the diffusion matrix entries were chosen for its simplicity and low Hamming weight, while [14, 16] defined efficiency by the number of 1’s in the matrix. In hardware implementation, it is common to consider the area required and a simplified metric is to count the number of XOR gates needed for implementation. In [16, 17, 22], the authors evaluate the number of XOR gates needed to implement the multiplication of the diffusion matrices. Detailed description of the XOR count can be found in [16, 17, 22]. In this paper, we quantify the weight of a diffusion matrix by the sum of XOR counts in its first row2.

The definition of left-circulant matrices is given as follows.

To efficiently determine whether a left-circulant matrix is MDS, we collect in advance the symbolic expressions of all determinants of its submatrices, and use them to compute the values of determinants. Once detecting that a determinant has value 0, the matrix is confirmed to be not MDS; otherwise, it is MDS. Using this method, the detection of MDS left-circulant matrices is speeded up (by dozens of times for \(5\le k\le 8\)) since a lot of submatrices have the same determinants in terms of symbolic expressions.

We also compare in Table 5 our candidates with the previous lightweight MDS matrices for \(n<8\). It shows that all our candidates have the minimum XOR count, though some of them have the same XOR count as the known ones.
Table 4.

In this section, we first describe the involutory MDS left-circulant matrices and then show our experimental results.

Next we explain how to search for IMDS left-circulant matrices. Notice that an IMDS left-circulant matrix must satisfy the \(\lfloor \frac{k+1}{2}\rfloor \) equations mentioned in Proposition 6. Theoretically, we can solve the equations and then check whether the solutions satisfy the MDS property. However, it is unclear how to efficiently solve the equations in a straightforward way. Solving the equations over \({\text {GF}}(2^n)\) using Gröbner basis is very slow for \(n=8\) and is slow even for \(n=4\). To find the solutions faster, we first guess the values of about \(\lfloor \frac{k-1}{2}\rfloor \) out of the k coefficients, then solve the equations. For \(n=4\), we guess all the possible values. For \(n=8\), we only guess some of the lightest elements. Our experiments show that it is sufficient to guess the lightest 9 elements to find the lightest IMDS left-circulant matrix.

We provide our results in Table 6. As shown in the table, there are no IMDS left-circulant matrices over \({\text {GF}}(2^4)\) for \(k=6\). All the listed matrices have been confirmed to achieve the smallest XOR count.
Table 6.

In this paper, we have presented a series of theory on generalized circulant matrices, so-called cyclic matrices, and also exploited the technique to successfully find the lightest MDS and involutory MDS matrices among this class of matrices with small orders. On one hand, cyclic matrices maintain the characteristics of circulant matrices, such as compact and flexible implementations in hardware and branch number in diffusion layer. On the other hand, they possess some advantages that circulant matrices cannot provide, for instance, the existence of involutory MDS matrices. The discovery of properties and constructions of MDS cyclic matrices may provide practical significance as well as theory value. Before this work, searching for the lightest MDS circulant matrices of order 8 are widely believed to be infeasible. Our results demonstrate an opposite view on this—we make it feasible under a credible metric—despite no guarantee of general case. As such, we can find the lightest MDS circulant matrices of order 8 which have less XOR count than the previously known ones in the literatures. Specially for the hash function WHIRLPOOL, we also provide a better MDS matrix which has smaller XOR count under the same setting. Although it is proven that IMDS left-circulant matrix of order \(2^d\) does not exist, we find IMDS matrices for the other orders which forms a complement to the work in [22], where there exist only IMDS Hadamard matrices of order \(2^d\). All in all, we have found new lightweight MDS matrices that are flexible in hardware implementation and also a complete set of lightweight IMDS matrices for order \(k \le 8\).

The authors would like to thank Jian Guo, Gregor Leander, Thomas Peyrin, Yu Sasaki and the anonymous reviewers for their valuable suggestions.