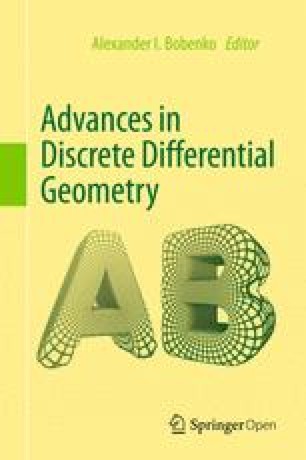 A Variational Principle for Cyclic Polygons with Prescribed Edge Lengths

We provide a new proof of the elementary geometric theorem on the existence and uniqueness of cyclic polygons with prescribed side lengths. The proof is based on a variational principle involving the central angles of the polygon as variables. The uniqueness follows from the concavity of the target function. The existence proof relies on a fundamental inequality of information theory. We also provide proofs for the corresponding theorems of spherical and hyperbolic geometry (and, as a byproduct, in \(1+1\) spacetime). The spherical theorem is reduced to the Euclidean one. The proof of the hyperbolic theorem treats three cases separately: Only the case of polygons inscribed in compact circles can be reduced to the Euclidean theorem. For the other two cases, polygons inscribed in horocycles and hypercycles, we provide separate arguments. The hypercycle case also proves the theorem for “cyclic” polygons in \(1+1\) spacetime.

Variational Principle Straight Line Segment Hyperbolic Geometry Affine Plane Short Geodesic
These keywords were added by machine and not by the authors. This process is experimental and the keywords may be updated as the learning algorithm improves.
Download chapter PDF

This article is concerned with cyclic polygons, i.e., convex polygons inscribed in a circle. We will provide a new proof of the following elementary theorem in Sect. 2.

The left hand side of inequality (2) is called the Kullback–Leibler divergence or information gain of q from p, also the relative entropy of p with respect to q. The inequality follows from the strict concavity of the logarithm function (see, e.g., Cover and Thomas [3]).

In Sects. 3 and 4 we provide proofs for non-Euclidean versions of Theorem 1.1. The spherical version requires an extra inequality:

Inequality (3) is necessary because the perimeter of a circle in the unit sphere cannot be greater than \(2\pi \), and the perimeter of the inscribed polygon is a lower bound. We require strict inequality to exclude polygons that degenerate to great circles (with all interior angles equal to \(\pi \)).

In Sect. 3, we prove Theorem 1.2 by a straightforward reduction to Theorem 1.1: connecting the vertices of a spherical cyclic polygon by straight line segments in the ambient Euclidean \(\mathbb R^{3}\), one obtains a Euclidean cyclic polygon.

In the case of hyperbolic geometry, the notion of “cyclic polygon” requires additional explanation. We call a convex hyperbolic polygon cyclic if its vertices lie on a curve of constant non-zero curvature. Such a curve is either

There exists a hyperbolic cyclic polygon with \(n\ge 3\) sides of lengths \(\ell _{1},\ldots ,\ell _n\in \mathbb R\) if and only if they satisfy the polygon inequalities (1), and this cyclic hyperbolic polygon is unique.

The cases of polygons inscribed in horocycles and hypercycles cannot be reduced to the Euclidean case because the intrinsic geometry of the affine plane of the polygon is not Euclidean: In the horocycle case, the scalar product is degenerate with a 1-dimensional kernel. Hence, this case reduces to the case of degenerate polygons inscribed in a straight line. It is easy to deal with. In the hypercycle case, the scalar product is indefinite. This case reduces to polygons inscribed in hyperbolas in flat \(1+1\) spacetime. The variational principle of Sect. 2 can be adapted for this case (see Sect. 5), but the corresponding target function fails to be concave or convex. It may be possible to base a proof of existence and uniqueness on this variational principle, perhaps using a \(\min \)-\(\max \)-argument, but we do not pursue this route in this article. Instead, we deal with polygons inscribed in hypercycles using a straightforward analytic argument.

Some history, from ancient to recent. Theorems 1.1–1.3 belong to the circle of results connected with the classical isoperimetric problem. As the subject is ancient and the body of literature is vast, we can only attempt to provide a rough historical perspective and ask for leniency regarding any essential work that we fail to mention.

The early history of the relevant results about polygons is briefly discussed by Steinitz [13, Sect. 16]. Steinitz goes on to discuss analogous results for polyhedra, a topic into which we will not go. A more recent and comprehensive survey of proofs of the isoperimetric property of the circle was given by Blåsjö [2].

It was known to Pappus that the regular n-gon had the largest area among n-gons with the same perimeter, and that the area grew with the number of sides. This was used to argue for the isoperimetric property of the circle:

(Isoperimetric Theorem) Among all closed planar curves with given length, only the circle encloses the largest area.

It is not clear who first stated the following theorem about polygons:

(Secant Polygon) Among all n-gons with given side lengths, only the one inscribed in a circle has the largest area.

This was proved by Moula [8], by L’Huilier [5] (who cites Moula), and by Steiner [12] (who cites L’Huilier). L’Huilier also proved the following theorem:

(Tangent Polygon) Among all convex n-gons with given angles, only the one circumscribed to a circle has the largest area when the perimeter is fixed and and smallest perimeter when the area is fixed.

Neither Blaschke, nor Steiner, L’Huilier, or Moula provide an argument for the uniqueness of the maximizer in Theorem 1.5 or 1.6. It seems that even after Weierstrass, the fact that the sides determine a cyclic polygon uniquely was considered too obvious to deserve a proof.

Penner [9, Theorem 6.2] gives a complete proof of Theorem 1.1. He proceeds by showing that there is one and only one circumcircle radius that allows the construction of a Euclidean cyclic polygon with given sides (provided they satisfy the polygon inequalities).

Schlenker [11] proves Theorems 1.2 and 1.3, and also the isoperimetric property of non-Euclidean cyclic polygons, i.e., the spherical and hyperbolic versions of Theorem 1.5. His proofs of the isoperimetric property are based on the remarkable equation
$$\begin{aligned} \sum \dot{\alpha }_{i}v_{i}=0 \end{aligned}$$
(5)
characterizing the change of angles \(\alpha _{i}\) of a spherical or hyperbolic polygon under infinitesimal deformations with fixed side lengths. Here, \(v_{i}\in \mathbb R^{3}\) are the position vectors of the polygon’s vertices in the sphere or in the hyperboloid, respectively. To prove the uniqueness of spherical and hyperbolic cyclic polygons with given sides he uses separate arguments similar to Penner’s.

The function \(\text {Cl}_2:\mathbb R\rightarrow \mathbb R\) is continuous, \(2\pi \)-periodic, and odd. It is differentiable except at integer multiples of \(2\pi \) where the graph has vertical tangents (see Fig. 2).

Thus, to prove Theorem 1.1, we need to show that \(f_\ell \) has a critical point in \(D_n\) if and only if the polygon inequalities (1) are satisfied, and that this critical point is then unique. The following proposition and corollary deal with the uniqueness claim.

This proves the uniqueness claim of Theorem 1.1.

This completes the proof of Theorem 1.1.

The function \(V_{n}\) has the following interpretation in terms of hyperbolic volume [6]. Consider a Euclidean cyclic n-gon with central angles \(\alpha _{1},\ldots ,\alpha _{n}\). Imagine the Euclidean plane of the polygon to be the ideal boundary of hyperbolic 3-space in the Poincaré upper half-space model. Then the vertical planes through the edges of the polygon and the hemisphere above its circumcircle bound a hyperbolic pyramid with vertices at infinity. Its volume is \(\frac{1}{2}V_{n}(\alpha _{1},\ldots ,\alpha _{n})\). Together with Schläfli’s differential volume equation (rather, Milnor’s generalization that allows for ideal vertices [7]), this provides another way to prove Proposition 2.1.

We will use the following estimate in the proof of Proposition 3.1:

The statement of Lemma 3.3 can be strengthened. Equality holds in (16) if and only if at most one \(\beta _{k}\) is greater than zero. This is easy to see, but we do not need this stronger statement in the following proof.

The polygon inequalities (1) are clearly necessary for the existence of a hyperbolic cyclic polygon, because every side is a shortest geodesic. It remains to show that they are also sufficient, and that the polygon is unique, i.e., Proposition 4.2. First, we review some basic facts from hyperbolic geometry.

A curve of intersection of \(\mathbb H^{2}\) with an affine plane in \(\mathbb R^{2,1}\) that does not contain 0 is a hyperbolic circle, a horocycle, or a hypercycle, depending on whether the plane is spacelike, lightlike, or timelike.

Thus, connecting the vertices of a hyperbolic cyclic polygon by straight line segments in the ambient \(\mathbb R^{2,1}\), one obtains a planar polygon in \(\mathbb R^{2,1}\), but the intrinsic geometry of the plane will only be Euclidean if the hyperbolic polygon is inscribed in a circle (see Fig. 4). If the polygon is inscribed in a horocycle or hypercycle, then the geometry of the plane will be degenerate with signature \((+,0)\) or a \(1+1\)-spacetime with signature \((+,-)\), respectively.

This completes the proof of Proposition 4.1. \(\square \)

If \(\ell \in \mathbb R^n_{>0}\) satisfies the polygon inequalities (1), then there exists a unique hyperbolic cyclic polygon with these side lengths.

(ii) If the chordal lengths \(\bar{\ell }\) satisfy condition (25), then the corresponding hyperbolic cyclic polygon can be constructed by marking off the lengths \(\bar{\ell }_{i}\) for \(i\not =k\) along a horocycle (see Fig. 5). To see the uniqueness claim, note that all horocycles are congruent.

This concludes the proof of Proposition 4.2. \(\square \)

This research was supported by DFG SFB/TRR 109 “Discretization in Geometry and Dynamics”.

Open Access This chapter is distributed under the terms of the Creative Commons Attribution-Noncommercial 2.5 License (http://creativecommons.org/licenses/by-nc/2.5/) which permits any noncommercial use, distribution, and reproduction in any medium, provided the original author(s) and source are credited.

The images or other third party material in this chapter are included in the work’s Creative Commons license, unless indicated otherwise in the credit line; if such material is not included in the work’s Creative Commons license and the respective action is not permitted by statutory regulation, users will need to obtain permission from the license holder to duplicate, adapt or reproduce the material.