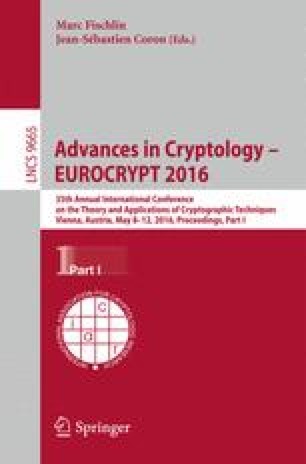 Annual International Conference on the Theory and Applications of Cryptographic Techniques

Number Field Sieve (NFS) NFS Algorithm Polynomial Selection Conjugation Method Medium Prime Case
These keywords were added by machine and not by the authors. This process is experimental and the keywords may be updated as the learning algorithm improves.
Download conference paper PDF

Studying the hardness of the DLP on subgroups of the multiplicative group of a finite field is an important problem. There are two general algorithms for tackling the DLP on such groups. These are the function field sieve (FFS) [1, 2, 16, 18] algorithm and the number field sieve (NFS) [11, 17, 19] algorithm. Both these algorithms follow the framework of index calculus algorithms which is currently the standard approach for attacking the DLP in various groups.

For small characteristic fields, the FFS algorithm leads to a quasi-polynomial running time [6]. Using the FFS algorithm outlined in [6, 15], Granger et al. [12] reported a record computation of discrete log in the binary extension field \(\mathbb {F}_{2^{9234}}\). FFS also applies to the medium characteristic fields. Some relevant works along this line are reported in [14, 18, 25].

Joux, Lercier, Smart and Vercauteren [19] later showed that the NFS algorithm is applicable to all finite fields. Since then, several works [5, 13, 20, 24] have gradually improved the NFS in the context of medium to large characteristic finite fields.

The NFS based algorithm has been extended to multiple number field sieve algorithm (MNFS). The work [8] showed the application of the MNFS to medium to high characteristic finite fields. Pierrot [24] proposed MNFS variants of the GJL and the Conjugation methods. For more recent works on NFS we refer to [4, 7, 22].

Our contributions: In this work, we build on the works of [5, 17] to propose a new method of polynomial selection for NFS over \(\mathbb {F}_{p^n}\). The new method both subsumes and generalises the GJL and the Conjugation methods. There are two parameters to the method, namely a divisor d of the extension degree n and a parameter \(r\ge k\) where \(k=n/d\).

2 Background on NFS for Non-Prime Fields

Following the structure of index calculus algorithms, NFS has three main phases, namely, relation collection (sieving), linear algebra and descent. Prior to these, is the set-up phase. In the set-up phase, two number fields are constructed and the sieving parameters are determined. The two number fields are set up by choosing two irreducible polynomials f(x) and g(x) over the integers such that their reductions modulo p have a common irreducible factor \(\varphi (x)\) of degree n over \(\mathbb {F}_{p}\). The field \(\mathbb {F}_{p^n}\) will be considered to be represented by \(\varphi (x)\). Let \({\mathfrak {g}}\) be a generator of \(\mathfrak {G}=\mathbb {F}_{p^n}^\star \) and let q be the largest prime dividing the order of \(\mathfrak {G}\). We are interested in the discrete log of elements of \(\mathfrak {G}\) to the base \({\mathfrak {g}}\) modulo this largest prime q.

(5)
The relation given by (5) is a linear equation modulo q in the unknown virtual logs. More than \((\#\mathcal {F}_1+\#\mathcal {F}_2+ r_1 + r_2)\) such relations are collected by sieving over suitable \(\phi (x)\). The linear algebra step solves the resulting system of linear equations using either the Lanczos or the block Wiedemann algorithms to obtain the virtual logs of factor basis elements.

3 Polynomial Selection and Sizes of Norms

It is evident from the description of NFS that the relation collection phase requires polynomials \(\phi (x)\in \mathbb {Z}[x]\) whose images in the two number fields are simultaneously smooth. For ensuring the smoothness of \(\phi (\alpha )\) and \(\phi (\beta )\), it is enough to ensure that their norms viz, \(\mathrm{Res}(f,\phi )\) and \(\mathrm{Res}(g,\phi )\) are B-smooth. We refer to [5] for further explanations.

Brief descriptions of these methods are given below.

For the GJL method, while constructing the matrix M, the coefficients of the polynomial \(\varphi (x)\) are used. If, however, some of these coefficients are zero, then these may be ignored. The idea is given by the following result.

In the simple observation made in the earlier section, the non-zero terms of the polynomial g(x) are powers of \(x^d\). This creates a restriction and does not turn out to be necessary to apply the main idea of the previous section. Once the polynomial \(\psi (x)\) is obtained using the LLL method, it is possible to substitute any degree d polynomial with small coefficients for x and still the norm bound will hold. In fact, the idea can be expressed more generally in terms of resultants. Algorithm \(\mathcal {A}\) describes the new general method for polynomial selection.

The following result states the basic properties of Algorithm \(\mathcal {A}\).

Proposition 2 provides the relevant bound on the product of the norms of a sieving polynomial \(\phi (x)\) in the two number fields defined by f(x) and g(x). We note the following points.

We compare the norm bounds for \(t=2\), i.e., when the sieving polynomial is linear. In this case, Table 2 lists the degrees and norm bounds of polynomials for various methods. Table 3 compares the new method with the JLSV1 and the GJL method for concrete values of n, r and d. This shows that the new method provides different trade-offs which were not known earlier.

As an example, we can see from Table 3 that the new method compares well with GJL and JLSV1 methods for \(n=4\) and Q of 300 dd (refer to Table 1). As mentioned in [5], when the differences between the methods are small, it is not possible to decide by looking only at the size of the norm product. Keeping this in view, we see that the new method is competitive for \(n=6\) as well. These observations are clearly visible in the plots given in the Fig. 3. From the Q-E pairs given in Table 1, it is clear that the increase of E is slower than that of Q. This suggests that the new method will become competitive when Q is sufficiently large.
Table 2.

The goal of the asymptotic complexity analysis is to express the runtime of the NFS algorithm using the L-notation and at the same time obtain bounds on p for which the analysis is valid. Our description of the analysis is based on prior works predominantly those in [5, 17, 19, 24].

From Sect. 3, we recall the following.

Allowing r to be greater than k leads to improved asymptotic complexity. We do not perform this analysis. Instead, we perform the analysis in the similar situation which arises for the multiple number field sieve algorithm.

Note that the parameter a which determines the size of p is not involved in any of the computation. The assumption \(a>1/3\) is required to ensure that the bound on the product of the norms can be taken to be the expression given by (7).

Theorems 2 and 3 show that the generality introduced by k and r do not affect the overall asymptotic complexity for the medium and large prime case and the attained complexities in these cases are the same as those obtained for previous methods in [5].

As the name indicates, the multiple number field sieve variant uses several number fields. The discussion and the analysis will follow the works [8, 24].

8.1 Further Analysis of the Boundary Case

In Fig. 4, we have plotted \(2c_b\) given by Theorem 4 against \(c_p\) for some values of t, k and r where the minimum complexity of MNFS-\(\mathcal {A}\) is attained. The plot is labelled MNFS-\(\mathcal {A}\). The sets S(t, k, r) are clearly identifiable from the plot. The figure also shows a similar plot for NFS-\(\mathcal {A}\) which shows the complexity in the boundary case given by Theorem 1. For comparison, we have plotted the complexities of the GJL and the Conjugation methods from [5] and the MNFS-GJL and the MNFS-Conjugation methods from [24].

Based on the plots given in Fig. 4, we have the following observations.

In a manner similar to that used to prove Theorem 4, it is possible to work out the complexities for the medium and large characteristic cases of the MNFS corresponding to the new polynomial selection method. To tackle the medium prime case, the value of t is taken to be \(t=c_tn\left( (\ln Q)(\ln \ln Q)\right) ^{-1/3}\) and to tackle the large prime case, the value of r is taken to be \(r=c_r/2\left( (\ln Q)(\ln \ln Q)\right) ^{1/3}\). This will provide a relation between \(c_b,c_v\) and r (for the medium prime case) or t (for the large prime case). The method of Lagrange multipliers is then used to find the minimum value of \(c_b\). We have carried out these computations and the complexities turn out to be the same as those obtained in [24] for the MNFS-GJL (for large characteristic) and the MNFS-Conjugation (for medium characteristic) methods. Hence, we do not present these details.

In this work, we have proposed a new method for polynomial selection for the NFS algorithm for fields \(\mathbb {F}_{p^n}\) with \(n>1\). Asymptotic analysis of the complexity has been carried out both for the classical NFS and the MNFS algorithms for polynomials obtained using the new method. For the boundary case with \(p=L_Q(2/3,c_p)\) for \(c_p\) outside a small set, the new method provides complexity which is lower than all previously known methods.