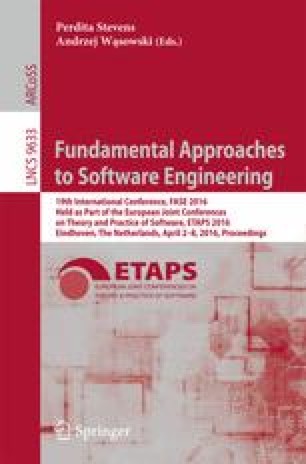 We present in this paper CafeInMaude, an interpreter for non-behavioral CafeOBJ specifications. The interpreter has been implemented in Maude. This alternative implementation combines CafeOBJ specification and theorem proving capabilities with efficient and extensible Maude commands and tools. Hence, it makes it possible to use both CafeOBJ proof scores and reduction commands and Maude model checking, narrowing, or theorem proving capabilities with the same tool.

CafeOBJ [4] is a language for writing formal specifications for a wide variety of software and/or hardware systems, and verifying properties of them. CafeOBJ implements equational logic by rewriting and can be used as a powerful interactive theorem proving system. Specifiers can write proof scores [5] also in CafeOBJ and perform proofs by executing these proof scores. CafeOBJ, implemented in Lisp, provides several features to ease the specification of systems. These features include a flexible mix-fix syntax, powerful and clear typing system with ordered sorts, parameterized modules and views for instantiating the parameters, module expressions, operators for defining terms, equations for defining the (possibly conditional) equalities between terms, and (possibly conditional) transitions for specifying how a system evolves, among others.

CafeOBJ and Maude [1] are sister languages of the OBJ family. Maude modules are executable rewriting logic specifications and its C++ implementation shares many features with CafeOBJ. However, while the CafeOBJ community has focused on proofs via proof scores, the Maude community has focused on (i) verification of properties via model checking and exhaustive search, efficiently implemented in Maude, and (ii) tools implemented in Maude itself, thanks to the reflective capabilities of Maude [1], which allows users to extend Maude with new syntax and commands.1 Among these tools we have the Maude Formal Environment (MFE) [3], which includes tools for proving termination, confluence, and coherence, the Constructor-based Inductive Theorem Prover (CITP) [6], a tool for proving inductive properties of systems specified with constructor-based logics, and the declarative debugger and test-case generator [8].

Taking into account the similarities between both languages, using Maude reflective capabilities, and using the translation in [7] we have implemented CafeInMaude, a CafeOBJ interpreter implemented in Maude. It defines both the parsing mechanisms required to introduce CafeOBJ specifications into the Maude database (hence allowing other Maude tools to be used with these specifications) and the execution strategies for faithfully executing proof scores. In this way it is possible to combine both Maude and CafeOBJ features. For example, it is now possible to first prove the termination and confluence of a theory using the MFE and then prove properties on it by using proof scores.

Moreover, CafeInMaude provides a simple framework where new features and commands can be added and tested just by using Maude code (much more familiar to CafeOBJ programmers than the Lisp implementation of CafeOBJ or the C++ implementation of Maude). Once these new features become mature they can be added to the standard Lisp implementation. In fact, we have easily added new features like the metadata and the nonexec attributes, which are used to indicate extra information and to prevent the engine from using these statements when executing, respectively.

We present in this section how to execute CafeOBJ specifications, how to combine them with Maude tools, and how to extend CafeOBJ syntax and commands. Finally, we summarize the limitations of the tool with respect to the standard Lisp implementation.

Although Maude requires some constraints to allow input/output with the user, being the most important of them that modules and commands must be enclosed in parentheses, standard CafeOBJ specifications can be easily loaded by CafeInMaude by using the script provided in the webpage above. It executes a Java pre-parser to the files and introduces these modified files into Maude.

CafeInMaude supports any non-behavioral CafeOBJ specification and open-close environment, including those using the search predicates available in the latest releases of CafeOBJ [9]. As an interesting case study, we have used our tool for the falsification of the NSPK protocol, which finds a state in which NSPK does not enjoy the authentication property by combining bounded model checking by means of search and induction by using proof scores. More details are available at http://www.jaist.ac.jp/~kokichi/class/i613-1312 and https://github.com/ariesco/CafeInMaude.

In the same way, any command can be applied to CafeOBJ specifications. Therefore, it is possible to use Maude commands such as narrowing [2], which allows the user to perform symbolic search starting with non-ground terms.

Finally, additional tools extending Maude can also be used. In order to use these tools the user must indicate that the grammar used by the tool is an extension of the CafeOBJ grammar: CafeGrammar. Using this idea, we have already integrated the Maude Formal Environment (MFE) [3], the Constructor-based Inductive Theorem Prover (CITP) [6], and the declarative debugger and test-case generator [8].

Since the implementation of CafeInMaude depends on a grammar defined in Maude, it is easy for Maude and CafeOBJ programmers to extend it. Extensions just require two steps: (i) defining the type (if it does not exist yet) and the syntax of the new feature and (ii) define how to parse it, which includes its translation into Maude. The former is straightforward and just requires to define some operators in the grammar module, while the latter, though complex, is greatly eased by the parsing functions that we provide for parsing and translating any CafeOBJ term. Using these ideas we have added the metadata, nonexec, and owise attributes to add information, prevent from executing, and apply only when it is the only applicable equation, respectively.

Since CafeInMaude is based in a translation from CafeOBJ to Maude, it is constrained by the constructions available in CafeOBJ that are not available in Maude. These limitations mainly affect the modules with loose semantics: in Maude these modules cannot be parameterized and can only be imported by other modules with loose semantics, and only in including mode (indicating that junk and confusion are allowed). We deal with these restriction in a conservative way: if the user allows a non-strict translation (which is enough for the tools currently integrated in CafeInMaude), they are translated as modules with tight semantics, while a warning message indicates the changes performed in the modules; otherwise, the translation fails.

Moreover, Maude does not allow modules with free parameters to be used to instantiate parameterized modules. In this case the tool cannot translate the module and it displays an error message.