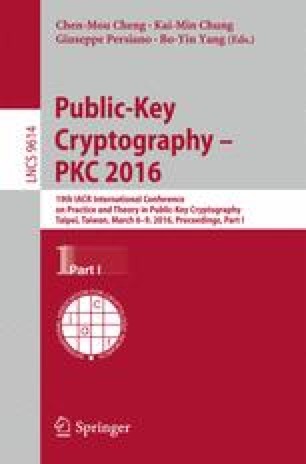 We construct a public-key encryption (PKE) scheme whose security is polynomial-time equivalent to the hardness of the Subset Sum problem. Our scheme achieves the standard notion of indistinguishability against chosen-ciphertext attacks (IND-CCA) and can be used to encrypt messages of arbitrary polynomial length, improving upon a previous construction by Lyubashevsky, Palacio, and Segev (TCC 2010) which achieved only the weaker notion of semantic security (IND-CPA) and whose concrete security decreases with the length of the message being encrypted.

At the core of our construction is a trapdoor technique which originates in the work of Micciancio and Peikert (Eurocrypt 2012).

D. Venturi—Supported by the European Commission (Directorate General Home Affairs) under the GAINS project HOME/2013/CIPS/AG/4000005057, and by the European Unions Horizon 2020 research and innovation programme under grant agreement No 644666.

Public-Key Encryption (PKE) is perhaps the most basic application of public-key cryptography [10]. Intuitively a PKE scheme allows Alice to encrypt a message \( M \) for Bob, given just Bob’s public key \( pk \); the received ciphertext C can be decrypted by Bob using the secret key \( sk \) corresponding to \( pk \).

Security of a PKE scheme can be formulated in different ways, depending on the assumed adversarial capabilities. The most basic and natural notion is that of indistinguishability against chosen-plaintext attacks (IND-CPA, a.k.a. semantic security) [14]; here we demand that a passive (computationally bounded) adversary only given \( pk \) should not be able to distinguish the encryption of two (adversarially chosen) messages \( M _0, M _1\).

Whilst already sufficient for some applications, IND-CPA security is not enough to deal with active adversaries. Hence, researchers have put forward stronger security notions. The de-facto standard notion of security for PKE is that of indistinguishability against chosen-ciphertext attacks [29] (IND-CCA), where we now demand that an active (computationally bounded) adversary given \( pk \) should not be able to distinguish the encryption of two (adversarially chosen) messages \( M _0, M _1\) even given access to an oracle decrypting arbitrarily chosen ciphertexts.1

By now we dispose of many PKE schemes satisfying IND-CCA security under a variety of assumptions, including factoring [15], decisional and computational Diffie-Hellman [6, 8], and learning parity with noise [18].

One nice feature of the Subset Sum problem is its believed hardness against quantum attacks. At the time of writing, the best quantum attack—due to Bernstein et al. [3]—on Subset Sum requires complexity \(2^{(0.241+o(1))n}\) to solve a random instance of the problem.

PKE from Subset Sum. The first PKE scheme based on the hardness of Subset Sum was constructed in the seminal work of Ajtai and Dwork [2], who presented a scheme whose semantic security is as hard to break as solving worst-case instances of a lattice problem called “the unique shortest vector problem” (uSVP). It is well known that Subset Sum can be reduced to uSVP [13, 20].

A disadvantage of the scheme in [2] (and its extensions [27, 30, 31]) is that they are based on Subset Sum only in an indirect way (i.e., via a non-tight reduction to uSVP). This limitation was overcome by the work of Lyubashevsky, Palacio, and Segev [22] that proposed a new PKE scheme achieving IND-CPA security with a simple and direct reduction to solving random instances of the Subset Sum problem.

More precisely, the security of the scheme in [22] is based on the assumption that a random instance \((\mathbf {a}, T)\) of the Subset Sum problem is indistinguishable from uniform. Such a decisional variant of the problem was shown to be equivalent to the above introduced computational version (i.e., to the task of recovering \(\mathbf {s}\)) by Impagliazzo and Naor [16].

1.1 Our Contributions and Techniques

The work of [22] left as an explicit open problem to construct a PKE scheme achieving IND-CCA security with a direct reduction to the hardness of Subset Sum.

Contributions. In this paper we present a new PKE scheme resolving the above open problem. Previous to our work, the only known PKE schemes with IND-CCA security from Subset Sum were the ones based on uSVP [27, 28] (which are not directly based on the hardness of Subset Sum). An additional advantage of our scheme is that it can be used to encrypt an arbitrary polynomial number of bits; this stands in sharp contrast with the scheme of [22], whose concrete security starts to decrease when encrypting messages of length longer than \(n\log n\) (where n is, as usual, the Subset Sum dimension).2 The theorem below summarizes our main result.

We use the above similarity between LWE and Subset Sum to construct our new PKE scheme, using a trapdoor technique due to Micciancio and Peikert [24]. Essentially our scheme relies on a tag-based trapdoor function, where the trapdoor is associated with a hidden tag. Whenever the function is evaluated w.r.t. the hidden tag, the trapdoor disappears and the function is hard to invert; for all other tags the function can be inverted efficiently given the trapdoor. Using the leftover hash lemma, one can switch the hidden tag without the adversary noticing.

It is well known that the above weak tag-based CCA notion can be generically enhanced to full-fledged IND-CCA security using a one-time signature scheme [17]. This allows us to conclude Theorem 1.

Pioneered by Merkle and Hellman [23], the first construction of PKE schemes based on Subset Sum were based on instances of the problem with special structure. All these constructions have been subsequently broken. (See [26] for a survey.)

In a seminal paper, Impagliazzo and Naor [16] presented constructions of universal one-way hash functions, pseudorandom generators and bit commitment schemes based on the hardness of random instances of Subset Sum.

Besides constructing PKE schemes, [22] additionally presents an oblivious transfer protocol with security against malicious senders and semi-honest receivers. The Subset Sum problem has also recently been used to solve the problem of outsourced pattern matching [11] in the cloud setting.

Re-randomizing Subset Sum. We use a technique introduced by Lyubashevsky [21] allowing to re-randomize a Subset Sum sample. This technique is based on the leftover hash lemma:

Given this re-randomization technique, we are able to construct a tag-based trapdoor function [24] and a PKE scheme whose hardness is independent of the amount of simultaneously encrypted bits. Of major significance is the fact that, after re-randomization, the noise is still bounded:

This bound will be crucial to show the correctness of our proposed PKE.

The main motivation behind the concept of tag-based encryption (TBE) comes from the fact that it is possible to transform an identity-based encryption scheme into an IND-CCA secure PKE scheme [4, 5]. Kiltz [17] showed that these transformations already work starting from TBE.

Given an exponential tag-space, there is a transformation from a \(\mathrm {TBE}\) scheme satisfying the above notion to an IND-CCA secure PKE; the transformation requires a one-time signature scheme or a message authentication code plus a commitment [17].

3 A Subset Sum Based TBE

The correctness of the scheme follows basically from the bounds on the noise of re-randomized Subset Sum instances. Given these bounds, the noise will be smaller than q / 4 such that it will be rounded away by the rounding function \(\lfloor \cdot \rceil _2\).

In the following, we describe algorithm \(\mathsf {D}\) interacting with \(\mathsf {A}\) and afterwards we analyse its success probability.

We presented a construction of a new PKE scheme with a simple and direct security proof based on the hardness of random instances of the Subset Sum problem. Our scheme achieves IND-CCA security and its concrete security does not depend on the length of the messages being encrypted. This resolves the main open problems from the previous work by Lyubashevsky, Palacio, and Segev [22].

Similarly to one of the constructions in [22], it is not hard to see that actually our PKE scheme achieves the stronger notion of IND-CCA security against non-adaptive leakage attacks.4 We leave it as an open problem to construct a PKE scheme with IND-CCA security against fully adaptive leakage attacks. An approach towards answering this question would be to construct a hash proof system [9] based on Subset Sum, as this would directly yield a leakage-resilient IND-CCA secure PKE [25].

It would also be interesting to construct PKE schemes with additional properties (always based on Subset Sum), such as circular security, key-dependent message security, and security against related-key attacks.