The Tyranny of Uncertainty 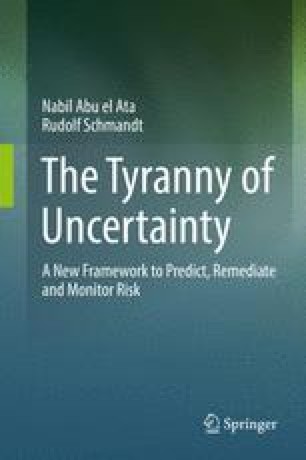 The main goal of any risk management practice is to be able to insure an acceptable level of predictability in order to gain a lead-time to mitigate a possible risk. However, until new risk management approaches are employed to fill the gap between the known and unknown, most crises will continue to come as a surprise. Risk is latent until an external event or an internal process will reveal its existence. Predictive analysis is an indispensable tool that can help decision makers preemptively test all possible or even some perceived impossible operational scenarios before a risk transforms into crisis or disaster. To be prepared is a better position than to discover the risk too late for business continuity or disaster recovery measures. In this way, predictive emulation becomes necessary for appropriate risk mitigation.

Boston Scientific Internet Banking Business Continuity Risk Management Practice Risk Management Approach
These keywords were added by machine and not by the authors. This process is experimental and the keywords may be updated as the learning algorithm improves.

A very small cause which escapes our notice determines a considerable effect that we cannot fail to see, and then we say that the effect is due to chance.

In the past, companies have tried to manage risks by focusing on potential threats outside the organization: competitors, shifts in the strategic landscape, natural disasters, or geopolitical events. They are generally less adept at detecting internal vulnerabilities that make breakdowns not just likely but in many cases, inevitable. Vulnerabilities enter organizations and other human-designed systems, as they inevitably grow more complex. Indeed, some systems are so complex that they defy a thorough understanding.

In March 2000, a fire struck a semiconductor plant in New Mexico, leaving Ericsson Inc. short of millions of chips that the Swedish telecom giant was counting on to launch a new mobile phone product. As a result, Ericsson was ultimately driven from the market while its rival Nokia Corp. flourished. Ericsson had failed to recognize the New Mexico plant as a bottleneck in a complex, interconnected global supply chain.

In February 1995, Barings Bank, Britain’s oldest merchant bank (it had financed the Napoleonic wars, the Louisiana Purchase, and the Erie Canal) went from strength and prestige to bankruptcy over the course of days. The failure was caused by the actions of a single trader—Nick Leeson—who was based in a small office in Singapore. Soon after Leeson’s appointment as general manager of Barings Securities Singapore, he used a secret account to hide losses he sustained engaging in the unauthorized trading of futures and options. The complexity of the Barings systems enabled Leeson to fool others into thinking that he was making money when in fact he was losing millions. But after the January 1995 Kobe, Japan, earthquake had rocked the Asian financial markets, Leeson’s accumulated losses—some $1.4 billion—became too enormous to hide, eventually leading to Barings’ collapse.

In August 2006, a defective software program aboard a Malaysia Airlines jetliner flying from Perth, Australia, to Kuala Lumpur, Malaysia, supplied incorrect data about the aircraft’s speed and acceleration. This confused the flight computers, which sent the Boeing 777 on a 3000-ft roller-coaster ride. With more than five million lines of code, aircraft software programs have become too large and complex to be tested thoroughly and are fielded without any guarantee that they will always work.

Legal codes and agreements have also become increasingly complicated, often resulting in loopholes that others can exploit. In the spring of 2006, Boston Scientific Corp., a medical device manufacturer, acquired its rival Guidant Corp., outbidding Johnson & Johnson in the process. Earlier, in order to gain rapid antitrust approval, Boston Scientific and J&J had both signed deals with pharmaceutical giant Abbott Laboratories in anticipation of the Guidant acquisition. J&J was first to strike a conditional licensing deal with Abbott, but the agreement failed to include a non-compete clause so Abbott was then able to help Boston Scientific—which it happily did. After Boston Scientific outbid J&J, it sold Guidant’s lucrative stent business to Abbott to alleviate regulators’ monopoly concerns. Thus, by exploiting a weakness in a complex legal agreement, Abbott was able to claim the best part of Guidant’s business in return for its assistance of Boston Scientific.

Time is often an enemy not only because of obsolescence and increasing wear and tear but also, ironically, because of the human ability to adapt to untenable situations and resist change. Consider, for example, the information technology system of the U.S. airlines Comair Inc. In 2004, after its acquisition by Delta Air Lines Inc., Comair was forced to shut its business for several days because of an overloaded legacy crew-management system. The result: 3900 cancelled or delayed flights, nearly 200,000 stranded passengers and a loss of $20 million in operating costs and lost revenue. Not only had the system exceeded its capacity (Comair’s business had been growing healthily for years), it also suffered from the addition of layers and layers of applications. Yet Comair’s IT department was reluctant to upgrade the system, as users had grown used to it. To make matters worse, Comair’s acquisition by Delta created additional complications: tight constraints on capital expenditures and friction between Comair employees and their new owners had eroded the IT department’s commitment. This combination of technological and organizational complexities created the “perfect storm” for an internal meltdown.

Unknowns Are Often the Greatest Contributors of Risk

Many studies have tried to correlate market events to financial crisis, while others point to the cyclic nature of financial environments and a third category perform post-crisis analysis in an attempt to identify the patterns that lead to crisis. Most of studies rely on the use of past data (big data and analytics) to derive trends and formulation that correspond in many cases to a partial understanding of the dynamics involved. Such dynamics produces the kind of “unknown unknown” Nassim Taleb1 was talking about that prevent sound prediction and full control.

An epidemic is an outbreak of a contractible disease that spreads through a human population. A pandemic is an epidemic whose spread is global. There have been many epidemics throughout history, such as the Black Death. In the last hundred years, significant pandemics include:
Other diseases that spread more slowly, but are still considered to be global health emergencies by the WHO, include:

Despite an improved ability to identify historic patterns of risk, it’s the mutation and transformation factors in many pandemic cases that create new risks corresponding to new patterns of disease or transmission that make containment difficult.

Information technology (IT) disasters can be damaging, disruptive, and downright dangerous. In the age of social media individuals can now voice their criticisms online. As a result, technical failures can cause lasting reputational damage and create a trust crisis capable of impacting large numbers of customers and shareholders.

Risk is latent until an external event or an internal process will reveal its existence. Predictive analysis is indispensable tool that can help decision makers preemptively test all possible or even some perceived impossible operational scenarios before a risk transforms into crisis or disaster. To be prepared is a better position than to discover the risk too late for business continuity or disaster recovery measures. In this way, predictive emulation becomes necessary for appropriate risk mitigation.