An Exploration of Dynamical Systems and Chaos 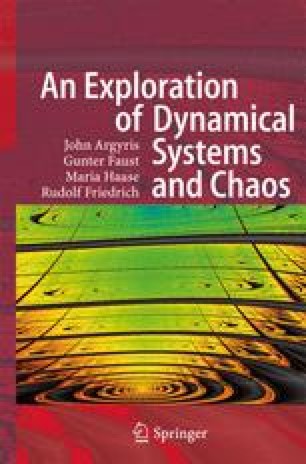 In the following chapter, our intention is to present an introductory discussion of conservative or Hamilton systems. By this, we mean those systems in which the total mechanical energy is preserved, i.e. no loss of energy due to friction or damping occurs. We direct our attention in particular to so-called multi-body problems. This category includes most of the standard problems of celestial mechanics since loss of energy, caused, for example, by tidal friction, can generally be ignored here. It should be noted, however, that the assumed motion of the planets in our solar system over aeons, apparently unshakeable in their temporal invariance and predictability, does not necessarily reproduce a generally valid behaviour of the stars and other celestial bodies. To illustrate such subtle considerations, we draw the reader’s attention to one of Saturn’s outer moons, Hyperion, which experiences a tumbling, irregular motion (probably chaotic) over long periods. Similar complex dynamic aspects generate the appearance of meteors. It may also be expedient to consider the motion of sub-microscopic particles as occurring, for example, in fusion reactors, using the Hamiltonian methodology. In the course of this and the subsequent chapter, Chapter 5, we shall observe that the characteristics of conservative systems differ fundamentally from those of dissipative systems.

Hamilton System Invariant Manifold Unstable Manifold Rotation Number Hamilton Function
These keywords were added by machine and not by the authors. This process is experimental and the keywords may be updated as the learning algorithm improves.
This is a preview of subscription content, log in to check access.