The Foundations of Computability Theory 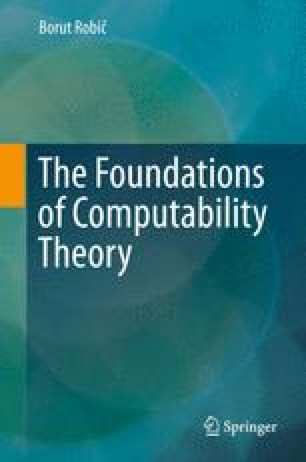 The Foundations of Computability Theory pp 9-30 | Cite as

The Foundational Crisis of Mathematics

The need for a formal definition of the concept of algorithm was made clear during the first few decades of the twentieth century as a result of events taking place in mathematics. At the beginning of the century, Cantor’s naive set theory was born. This theory was very promising because it offered a common foundation to all the fields of mathematics. However, it treated infinity incautiously and boldly. This called for a response, which soon came in the form of logical paradoxes. Because Cantor’s set theory was unable to eliminate them—or at least bring them under control—formal logic was engaged. As a result, three schools of mathematical thought—intuitionism, logicism, and formalism—contributed important ideas and tools that enabled an exact and concise mathematical expression and brought rigor to mathematical research.

Natural Number Mathematical Object Basic Notion Axiomatic System Classical Mathematic
These keywords were added by machine and not by the authors. This process is experimental and the keywords may be updated as the learning algorithm improves.

A paradox is a situation that involves two or more facts or qualities which contradict each other.