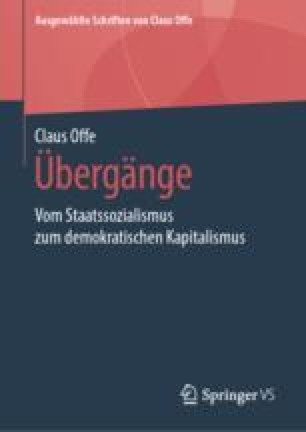 In 2009, the unpredicted, sudden, non-violent, and irreversible breakdown of authoritarian state socialism twenty years ago in Central Eastern Europe and, shortly later, the Soviet Union as well as the subsequent transformation of its system into a regime of democratic capitalism was widely remembered. Few would disagree that this event was the most consequential one to affect the region and the world since the end of World War II. But this breakdown of and transition from state socialism was far from universal.

Cite this chapter as:
Offe C. (2020) Why has Cuban state socialism escaped its “1989” ? Reflections on a non-event (2011). In: Übergänge. Ausgewählte Schriften von Claus Offe, vol 6. Springer VS, Wiesbaden