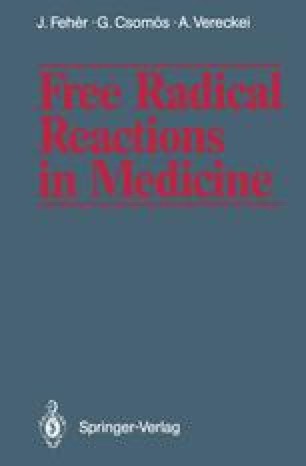 In normobaric hyperoxia, the most severe lesions are found in the lungs, whereas in hyperbaric hyperoxia, the damage of the central nervous system is even more severe and convulsions and grand mal epilepsy lead to death sooner than the pulmonary lesions would. In the pulmonary process, an acute or exudative phase and a subacute or chronic proliferative phase can be distinguished. The acute phase is characterized by perivascular, peribronchiolar, interstitial and alveolar oedema and alveolar haemorrhage with more or less extensive necrosis and the occurrence of type I epithelial cells. The proliferative phase is characterized by the progressive resorption of the exudates and thickening of the alveolar septa owing to hyperplasia of the interstitial cells. The type I alveolar cells are replaced by the relatively O2-resistant type II cells. Collagen and elastin deposition in the interstitium contributes to the thickening of pulmonary tissue involved in gas exchange, causing disturbances of diffusion. Oxygen toxicity on the molecular level is attributed to the reaction of oxygen free radicals with cellular components. The generation of these free radicals is accelerated in hyperoxia, and damage occurs as soon as the defence mechanisms become insufficient.

Systemic Lupus Erythematosus Respiratory Burst Paroxysmal Nocturnal Haemoglobinuria Free Radical Reaction Arachidonic Acid Metabolism
These keywords were added by machine and not by the authors. This process is experimental and the keywords may be updated as the learning algorithm improves.
Download to read the full chapter text