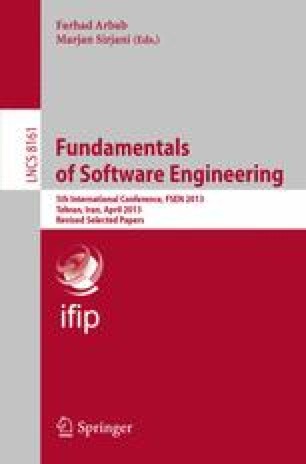 Efficient Operational Semantics for \( EB ^3\) for Verification of Temporal Properties

\( EB ^3\) is a specification language for information systems. The core of the \( EB ^3\) language consists of process algebraic specifications describing the behaviour of the entity types in a system, and attribute function definitions describing the entity attribute types. The verification of \( EB ^3\) specifications against temporal properties is of great interest to users of \( EB ^3\). We give here an operational semantics for \( EB ^3\) programs in which attribute functions are computed during program evolution and their values are stored into program memory. By assuming that all entities have finite domains, this gives a finitary operational semantics. We then demonstrate how this new semantics facilitates the translation of \( EB ^3\) specifications to LOTOS NT (LNT for short) for verification of temporal properties with the use of the CADP toolbox.

The \( EB ^3\) [10] method is an event-based paradigm for information systems (ISs) [17]. A typical \( EB ^3\) specification defines entities, associations, and their respective attributes. The process algebraic nature of \( EB ^3\) permits the explicit definition of intra-entity constraints. Yet its specificity against common state-space specifications, such as the B method [1] and Z, lies in the use of attribute functions, a special kind of recursive functions on the system trace, which combined with guards, facilitate the definition of complex inter-entity constraints involving the history of events. The use of attribute functions is claimed to simplify system understanding, enhance code modularity and streamline maintenance.

But the main problem in verifying \( EB ^3\) specifications against temporal-logic properties relies in the difficulty to handle the recursive definition of attribute functions if one relies on the classical, trace-based semantics. This type of semantics necessitates an unbounded memory model, and therefore only bounded model-checking can be achieved, in the absence of good abstractions that allow constructing finite-state models. This restriction is present in the original approach [10] and the subsequent model-checking attempt [9] even if all the entities utilized in the specification are finite.

Translating \( EB ^3\) specifications to LNT is not evident. The fundamental difficulties for designing a compiler from \( EB ^3\) into LNT are summarized in [6]. In particular, LNT does not feature global variables. Accesses to local variables is restricted in parallel processes of the form “\(\mathbf{par } \ proc_1 \ \mathbf{|| }\ proc_2 \ \mathbf{end }\ \mathbf{par }\)”, so that every variable written in \( proc_1 \) cannot be accessed in \( proc_2 \). Although, \( EB ^3\) programmers cannot define global variables explicitly, \( EB ^3\) permits the use of a single state variable, the system trace, in predicates of guard statements. Attribute functions can express the evolution of entity attributes in time, option which introduces an indirect notion of state to the language. As a result, \( EB ^3\) expressions of the form “\( C(T) \Rightarrow E \)” can be written, where \( C(T) \) is a predicate that refers to the system trace (the history of events) and \( E \) is a valid \( EB ^3\) expression.

We then present how \( EB ^3\) specifications can be translated to LNT for verification with CADP through an intuitive example and give some conclusions and lines for future work. The automatic translation of \( EB ^3\) specifications into LNT is studied in the companion paper [18]. We note that the translation of our example into LNT is produced using the tool presented in [18].

The \( EB ^3\) method has been specially designed to specify the functional behaviour of ISs. A standard \( EB ^3\) specification comprises (1) a class diagram representing entity types and associations for the IS being specified, (2) a process algebra specification, denoted by main, describing the IS, i.e. the valid traces of execution describing its behaviour, (3) a set of attribute function definitions, which are recursive functions on the system trace, and (4) input/output rules, to specify outputs for input traces, or SQL used to specify queries on the business model. We limit the presentation to the process algebra and the set of attribute functions used in the IS.

We then give three operational semantics for \( EB ^3\). The first, named Trace Semantics (\( Sem_{T} \)), is the standard semantics defined in [10]. The second, called Trace/Memory Semantics (\( Sem_{T/M} \)), is the alternative semantics, where attribute functions are computed during program evolution and their values are stored into program memory. By removing the trace from each state in \( Sem_{T/M} \), we obtain the third semantics for \( EB ^3\) specifications, which we name Memory Semantics, \( Sem_{M} \). The relevance of the \( Sem_{T/M} \) semantics stems from the fact that it is pivotal in proving the bisimulation between \( Sem_{T} \) and \( Sem_{M} \).

\(\mathbf{Case \;Study }\). We start by providing a simple case study which serves for introducing both the syntax and the semantics of \( EB ^3\). In Fig. 1, we give the functional requirements of a library management system and the corresponding \( EB ^3\) specification.The library system contains two entity types: \( books \) and \( members \). The process \( main \) is the parallel interleaving between \( m \) instances of process \( book \) and \( p \) instances of processes describing operations on \( members \). To avoid confusion, action names begin with uppercase letters, while process and attribute function names begin with lowercase letters.

The use of attribute functions is not adherent to standard process algebra practices as it may naively trigger the complete traversal and inspection of the system trace. Alternatively, one may come up with simpler specifications based solely on process algebra operations (without attribute functions) when the functional requirements imply loose interdependence between entities and associations. For instance, if all books are acquired by the library before any other action occurs and are eventually discarded (given that there are no more demands), \( main \)’s code can be modified in the following manner:
$$\begin{aligned} \begin{array}{ll} main = &{} (\;|||\; bId: \text {BID}:Acquire(bId)\;).\;(\;|||\; mId: \text {MID}: member(mId)^*\;).\\ &{} (\;|||\; bId: \text {BID}:Discard(bId)\;) \end{array} \end{aligned}$$
Note that the functional requirements are not contradicted, though the system’s behaviour changes dramatically. Programming naturally in a purely process-algebraic style without attribute functions in \( EB ^3\) may not always be obvious. In some cases, ordering constraints involving several entities are quite difficult to express without guards and lead to less readable specifications than equivalent guard-oriented solutions in \( EB ^3\) style. For instance in the body of \( loan(mId: MID,bId:BID) \), writing the specification without the use of the guard:
$$\begin{aligned} \begin{array}{ll} borrower(T,\;bId) = \bot \wedge nbLoans(T, mId) < \text {NbLoans} \\ \end{array} \end{aligned}$$
that illustrates the conditions under which a Lend can occur (notably when the book is available and nbLoans is less than the fixed bound NbLoans), is not trivial.

\(\mathbf{Execution }\). As a means to provide the operational intuition behind the three semantics introduced later in this section, we show how the \( EB ^3\) specification above is transformed through a four-step trace, assuming that the library may contain at most two books and at most two members, that is, \( BID=\{b_1,b_2\} \) and \( MID=\{m_1,m_2\} \).

The proof is straightforward, because the effect of the trace on the attribute functions and the program execution is coded in memory \( M \). Hence, intuitively the trace is redundant. \(\square \)

Combining the two Theorems and the transitivity of bisimulation.\(\square \)

\(\mathbf{ LNT }\). LNT combines, in our opinion, features of imperative and functional programming languages and value-passing process algebras. It has a user-friendly syntax and formal operational semantics defined in terms of labeled transition systems (LTSs). LNT is supported by the LNT.OPEN tool of CADP, which allows the on-the-fly exploration of the LTS corresponding to an LNT specification. We present the fragment of LNT that is useful for this translation. Its syntax is given in Fig. 7. LNT terms denoted by B are built from actions, choice (\(\mathbf{select }\)), conditional (\(\mathbf{if }\)), sequential composition (\(\mathbf{; }\)), breakable loop (\(\mathbf{loop }\) and \(\mathbf {break} \)) and parallel composition (\(\mathbf{par }\)). Communication is carried out by rendezvous on gates G with bidirectional transmission of multiple values. Gates in LNT (denoted with letter G with or without subscripts) correspond to the notion of labels in \( EB ^3\). Their parameters are called offers 6. An offer O can be either a send offer (!) or a receive offer (?). Synchronizations may also contain optional guards (\(\mathbf{where }\)) expressing boolean conditions on received values. The special action \(\delta \) is used for defining the semantics of sequential composition. The internal action is denoted by the special gate \(i\), which cannot be used for synchronization. The parallel composition operator allows multiway rendezvous on the same gate. Expressions \(E\) are built from variables, type constructors, function applications and constants. Labels L identify loops, which can be stopped using “\(\mathbf{break }\) L" from inside the loop body. The last syntactic construct defines calls to process P that take gates G \(_1, \ldots ,G_n\) and variables \(E_1, \ldots ,E_n\) as actual parameters. The semantics of LNT are formally defined in [5].

In this paper, we presented an alternative, traceless semantics \( Sem_{M} \) for \( EB ^3\) that we proved equivalent to the standard semantics Sem \(_T\). We showed how \( Sem_{M} \) facilitates the translation of \( EB ^3\) specifications to LNT for verification of temporal properties with CADP, by means of a translation in which the memory used to model attribute functions is implemented using an extra process that computes at each step the effect of each action on the memory. We presented the LNT translation of a case study involving a library with a predefined number of books and members, translation obtained with the aid of a compiler called \( EB ^3\)2LNT. The \( EB ^3\)2LNT tool is presented in detail in [18].

A formal proof of the correctness of the \( EB ^3\)2LNT compiler is under preparation. The proof strategy is by proving that the memory semantics of each \( EB ^3\) specification and its LNT translation are bisimilar, and works by providing a match between the reduction rules of \( Sem_{M} \) and the corresponding LNT rules [5].

As future work, we plan to study abstraction techniques for the verification of properties regardless of the number of components e.g. members, books that participate in the IS (Parameterized Model Checking). We will observe how the insertion of new functionalities to the ISs affects this issue. Finally, we will formalize this in the context of \( EB ^3\) specifications. 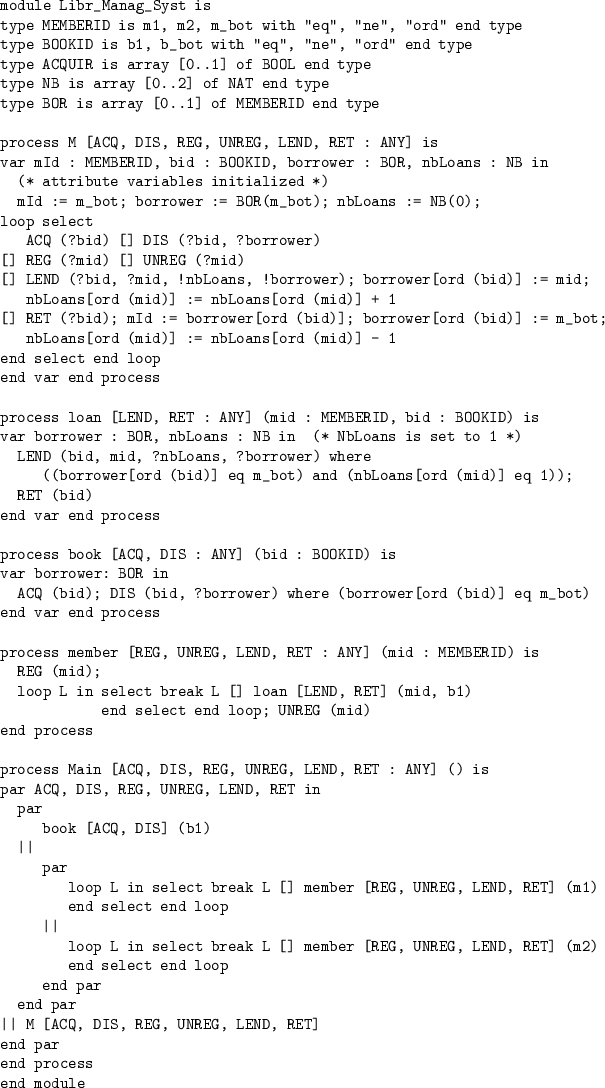 B LNT code for the Library Management System