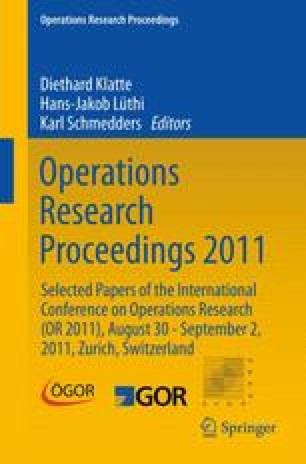 OpenSolver is an open source Excel add-in that allows spreadsheet users to solve their LP/IP models using the COIN-OR CBC solver. OpenSolver is largely compatible with the built-in Excel Solver, allowing most existing LP and IP models to be solved without change. However, OpenSolver has none of the size limitations found in Solver, and thus can solve larger models. Further, the CBC solver is often faster than the built-in Solver, and OpenSolver provides novel model construction and on-sheet visualisation capabilities. This paper describes Open- Solver’s development and features. OpenSolver can be downloaded free of charge at http://www.opensolver.org.

Decision Variable Major League Baseball Model Visualisation Leave Hand Side Integer Program Solver
These keywords were added by machine and not by the authors. This process is experimental and the keywords may be updated as the learning algorithm improves.
This is a preview of subscription content, log in to check access.