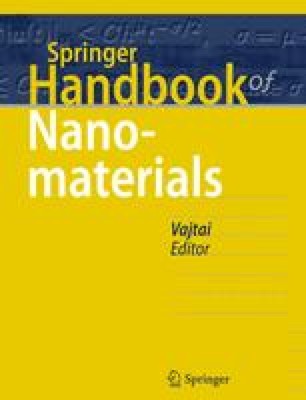 Single-walled carbon nanotubes (SWCNTs) are hollow, long cylinders with extremely large aspect ratios, made of one atomic sheet of carbon atoms in a honeycomb lattice. They possess extraordinary thermal, mechanical, and electrical properties and are considered as one of the most promising nanomaterials for applications and basic research. This chapter describes the structural, electronic, vibrational, optical, transport, mechanical, and thermal properties of these unusual one-dimensional (1-D) nanomaterials. The crystallographic (Sect. 4.2.1), electronic (Sect. 4.2.2), vibrational (Sect. 4.2.3), optical (Sect. 4.4), transport (Sect. 4.5), thermal (Sect. 4.6.1), and mechanical (Sect. 4.6.2) properties of these unusual 1-D nanomaterials will be outlined. In addition, we will provide an overview of the various methods developed for synthesizing SWCNTs in Sect. 4.3.

Even after more than two decades of extensive basic studies since their discovery, carbon nanotubes continue to surprise researchers with potential new applications and interesting discoveries of novel phenomena and properties. Because of an enormous thrust towards finding practical applications, carbon nanotube research is actively being pursued in diverse areas including energy storage, molecular electronics, nanomechanical devices, composites, and chemical and bio-sensing.

Structurally, carbon nanotubes are made up of sp2-bonded carbon atoms, like graphite, and can be conceptually viewed as rolled-up sheets of single-layer graphite, or graphene. Their diameter typically lies in the nanometer range while their length often exceeds microns, sometimes centimeters, thus making them 1-D nanostructures. Depending on the number of tubes that are arranged concentrically, carbon nanotubes are further classified into single-walled and multi- walled nanotubes. Single-walled carbon nanotubes, the subject of this chapter, are especially interesting. They are ideal materials in which to explore one-dimensional physics and strong Coulomb correlations. In addition, their cylindrical topology allows them to exhibit nonintuitive quantum phenomena when placed in a parallel magnetic field, due to the Aharonov–Bohm effect. A number of research groups have found exotic many-body effects through a variety of transport, optical, magnetic, and photoemission experiments.

Their electronic properties are very sensitive to their microscopic atomic arrangements and symmetry, covering a wide spectrum of energy scales. They can be either metallic or semiconducting with varying band gaps, depending on their diameter and chirality. Semiconducting nanotubes are particularly promising for photonic device applications with their diameter-dependent, direct band gaps, while metallic tubes are considered to be ideal candidates for a variety of electronic applications such as nanocircuit components and power transmission cables.