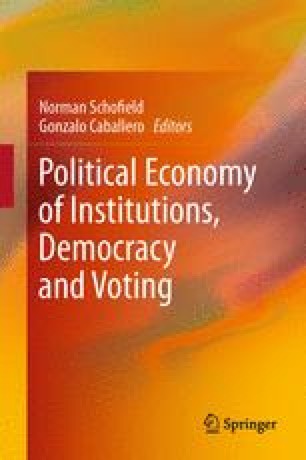 Political Economy of Institutions, Democracy and Voting pp 45-74 | Cite as

War, Wealth and the Formation of States

Employing agent-based modelling techniques, the authors examine the evolution of a world with sovereign states that maximize power. They show that: (1) the size (number) of states increases (decreases) as war technologies become capital-intensive; (2) the number of states declines with development and population expansion; (3) capital-rich (capital-poor) economies lead to smaller (larger) economies (mainly because war is less frequent if capital is mobile); (4) world government may become possible in the future (given the evolution of military technology) yet only with a very low probability (given the distribution of economic activities throughout the globe); (5) the possibility of secession leads to a permanent increase in the number of countries if all effects when the countries involved in the split are democratic. These stylized findings fit well the historical evolution of Europe and most of the territorial dynamics of state formation over time, at least until the nineteenth century. The last point accommodates the explosion of the number of countries we have witnessed in the twentieth century.

Variable Cost Capital Mobility Public Good Provision Territorial Size Technological Shock
These keywords were added by machine and not by the authors. This process is experimental and the keywords may be updated as the learning algorithm improves.
This is a preview of subscription content, log in to check access.

We thank Brett Carter and Waqas Jafris for their research assistance.

In the model, the parameters (that can be specified individually for each country) are: initial population density; rate of population increase; tax rate (from 0 to 1); a parameter indicating which percentage of error one country can incur when evaluating if it is convenient to attack another country; technology; and mobility (measuring how much of one country’s belongings are transferred to another country in case the first one is attacked and defeated).

Given a certain initial density and the type of territory (plain, hill, mountain), the initial population is calculated as:

[In turn, savings of each state are calculated as:

Parameters evolve at each step according to following structure.

The population of each unit region is incremented by a factor (1 + PopInc/1,000).

Military costs are of two types: fixed costs K and variable costs M * DS, where D is the distance of the cell from the capital of the country.

The parameters K, M, and S may depend on the current time step of the simulation. (See above for how to set them.)

Military costs can be manipulated to be of two types:

[The parameters Tech and Taxes can remain as they were originally set in the country even after it has been conquered. Or they can change to take the values of the conquering country.]

A country evaluates the possibility to attack a neighbor randomly, about every ten steps, unless there are already two ongoing attacks.

In this environment, any country A decides to attack D if the following conditions take place:

The attack lasts a random number of steps (between 10 and 30 steps).

An attack lasts a random number of steps (between 10 and 30).

Formula to evaluate strength or relative power ratio of countries

If PR ≤ 1.05, war ends in a tie with no winner. (The attacker does not conquer anything. The defender does not gain any territory.)

If 1.20 ≤ PR < 1.05, partial conquest of D by A (unless the annexed territory of D includes its capital, in which case there is total annexation).

If PR > 1.20 or if the partial annexation involves the loser’s capital, the winner absorbs completely the loser’s country.

Depending on the mobility parameter, a fraction of the loser’s accumulated wealth is transferred to the winner or it is lost.

If the attacking country has mistakenly evaluated the strength of its victim, the roles are reversed.

Depending on whether the parameters are “country-based” or not, the conquered regions either acquire the winner’s default parameters or maintain their current values.

2. The seceding cell is the capital of the new country.

3. The political regime of the seceding cell is determined in the following way. If the cell belonged to a different country than the current one and has some ‘memory’ of that past, it will chose the regime in the past country. If it has no such memory (either it did not belong to any other country in the past or the ‘memory’ of belonging has decline to 0), then the seceding cell mirrors the political regime of the country it wants to secede from.

4. The seceding cell defines the potential space of secession as follows: all those (contiguous) cells whose net contribution (income – military costs) is positive.

(The possibility of survival is calculated by looking both at the military strength and the probability of attack of neighbors. This means that there will be more secessions in areas that are contiguous to peace-prone countries.)

6. If both the seceding area and the existing country are democratic, the secession process works according to the following procedure:
Example:

7. If any of the two countries is authoritarian, the secession process works according to the following procedure:

At the end of the war is determined by looking at the military power of the old and the new countries:

MPOC (Military Power Old Country) = Income of all cells with positive contribution − MC of defending them.

MPNC (Military Power New Country) = Income of all cells with positive contribution − MC of defending them.

If MPOC > MPNC, the secession fails. Otherwise, the new countries becomes independent and obtains up to ½ of all the cells that are valuable to both countries. (Upper bound of ½ is arbitrary).