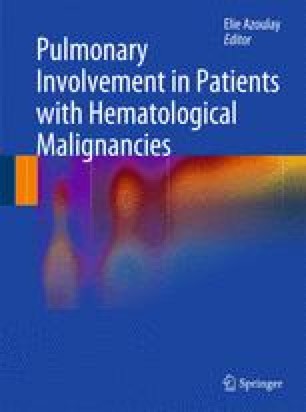 An Unexpected Diagnosis of Pulmonary Tuberculosis

Pulmonary tuberculosis is rare in critically ill cancer patients. We report the case of a man treated for Hodgkin’s lymphoma and admitted to the ICU for acute respiratory failure. All investigations were negative, and he died with a presumptive diagnosis of bleomycin-related pulmonary toxicity and Escherichia coli endocarditis. Several weeks after his death, cultures of sputum and BAL fluid samples were found positive for Mycobacterium tuberculosis. Postmortem pulmonary biopsies confirmed the diagnosis of pulmonary tuberculosis.

Acute Respiratory Distress Syndrome Acute Respiratory Failure Pulmonary Tuberculosis Invasive Pulmonary Aspergillosis Infectious Disease Department
These keywords were added by machine and not by the authors. This process is experimental and the keywords may be updated as the learning algorithm improves.
Download chapter PDF

This 68-year-old man was admitted to our medical ICU for acute respiratory failure. He was from Tunisia and had been working in France for 40 years. He had a history of myocardial infarction 6 years earlier with persistent cardiomyopathy and an ejection fraction of 66%. His treatment consisted of a beta-blocker, aspirin, and pravastatin. He had been admitted 6 months earlier to the infectious diseases department for evaluation of a fever with weight loss. Investigations were negative for infection with the HIV, hepatitis B and C viruses, cytomegalovirus, Mycobacterium tuberculosis, Cryptococcus neoformans, and leishmaniasis. Osteomedullar biopsies showed Hodgkin’s lymphoma. He had hepatomegaly and numerous enlarged lymph nodes in the mediastinum and mesentery, indicating dacarbazine stage 4 disease.

Over the next 6 months, he received chemotherapy including adriamycin, vinblastine, bleomycin, and dacarabazine. During the first episode of aplasia, he had sepsis of unknown origin with blood cultures positive for Escherichia coli. Computed tomography (CT) of the chest showed a response to chemotherapy with no other parenchymatous lesions (Fig. 57.1). When he was seen just before the seventh chemotherapy cycle, he reported a 15-day history of dyspnea, chills, and a cough. Oxygen saturation was 88% with 10 L/min oxygen. He had no evidence of shock, but his body temperature was 39.5°C. The chest X-ray disclosed alveolar lesions throughout the lung parenchyma (Fig. 57.2). He was admitted to the ICU and intubated within the first few hours. His PaO2/FiO2 ratio was 150, indicating acute respiratory distress syndrome (ARDS). He required vasopressors and developed acute renal failure requiring continuous venovenous hemodiafiltration on day 1.

Bacterial pneumonia: he was immunocompromised and had a fever and chills. Infection is the leading complication during chemotherapy [1].

Pneumocystis jiroveci pneumonia: He received no prophylactic treatment, and Hodgkin’s disease causes cellular immune deficiency. The 15-day symptom duration seemed long for this diagnosis, but the chest X-ray was compatible [2].

Invasive pulmonary aspergillosis: He had immunosuppression with a cellular immune deficiency and several episodes of neutropenia over the last few months. He reported no hemoptysis or chest pain, but this diagnosis remained consistent with the presence of Hodgkin’s disease.

Catheter-related bloodstream infection with acute lung injury: He had the same catheter for 6 months, but reported no symptoms during any of the chemotherapy infusions. Nevertheless, this diagnosis remained possible.

Viral pneumonia: Cytomegalovirus or herpes simplex virus pneumonia was considered, although there were no suggestive clinical findings. The patient was admitted during the influenza season, but reported no flu-like symptoms before the onset of respiratory failure.

Heart failure: He had received Adriamycin and had ischemic cardiomyopathy before treatment onset. The symptoms and chest X-ray findings were compatible with cardiogenic edema.

Treatment toxicity: He received bleomycin during the first six chemotherapy cycles. This drug is associated with interstitial pneumonia and pulmonary fibrosis, particularly in smokers and in patients given granulocyte/macrophage colony-stimulating factor [3].

ARDS related to another condition: He reported no extrapulmonary symptoms before the onset of respiratory failure. Nevertheless, he was evaluated for the main causes of secondary ARDS (pancreatitis and extrapulmonary infections).

During the first few days, he received cephalospo-rin, erythromycin, sulfamethoxazole-trimethoprim, and furosemide. Bronchoalveolar lavage (BAL) was performed on day 2 to look for infectious agents, such as Pneumocystis, and for arguments supporting bleomycin-related pulmonary toxicity. The BAL fluid exhibited a normal cytological pattern with no evidence of Pneumocystis by microscopic examination or PCR and no viruses. Bacteriological studies of the BAL fluid showed 2 × 104 E. coli/mm3 with resistance to cephalosporin. He was then given imipenem and amikacin. His condition deteriorated, and he had multiorgan failure with fever. Abdominal pain prompted an ultrasound scan of the abdomen, which showed two abscesses in the spleen. Transesophageal echocardiography visualized a small vegetation on an aortic valve with no valve destruction, suggesting bacterial endocarditis. The patient died on the same day.

Tuberculosis in ICU patients is still a severe disease associated with a high mortality rate. Few studies of pulmonary tuberculosis in patients requiring ICU admission are available. Our patient was no doubt exposed to M. tuberculosis during his childhood in Tunisia. Moreover, he had immunosuppression with altered cellular immunity because of Hodgkin’s disease and chemotherapy [1]. Cellular immune deficiency increases the risk of tuberculosis. Nevertheless, infections with other bacteria are far more common [1].

Pulmonary tuberculosis is often fatal in critically ill patients. A 2006 retrospective study in 58 patients reported a 25% ICU mortality rate [4]. In that study, 45% of patients had respiratory symptoms for more than 2 weeks, 81% were admitted for respiratory distress, and 79% had respiratory specimens positive for M. tuberculosis. By multivariate analysis, factors associated with higher mortality were associated organ dysfunction (P = 0.002), sepsis (P = 0.001), nosocomial pneumonia (P = 0.002), and ARDS (P = 0.008). Our patient had three of these four risk factors.

A 2005 retrospective study in two French ICUs [5] enrolled 99 patients with pulmonary tuberculosis, including 22 with malignancies. Among them, 30% had tuberculosis diagnosed during the ICU stay. Symptom duration before the diagnosis was longer than 1 month in 34% of patients. Mortality was 26% and was related to the number of organ failures (OR per additional failing organ, 3.11), the nutritional status (albumin <20 g/L had an OR of 3.73), and a time from symptom onset to treatment longer than 1 month (OR, 3.73).

More than 20 different causes may lead to acute respiratory failure in patients with hematological malignancies who are admitted to the ICU. The diagnosis relies on a systematic assessment of these possible causes using the DIRECT approach ( Chap. 2 in the diagnosis strategy). In our patient, the time from symptom onset to admission was 15 days, and the alteration in cellular immune deficiency associated with Hodgkin’s disease suggested infection with intracellular bacteria. Radiographic findings before ICU admission were normal. Our patient had a history of ischemic cardiomyopathy, and cardiogenic edema was therefore a possibility. He received bleomycin and was a smoker. Based on these features, the most likely diagnoses were infection (bacterial, viral, or parasitic), cardiogenic edema, and pulmonary toxicity [1]. Bleomycin toxicity has been evaluated in a study of patients with Hodgkin’s disease [3]. Of 141 patients, 18% experienced bleomycin toxicity. The ABVD chemotherapy regimen, granulocyte/macrophage colony-stimulating factor, radiation therapy, and age older than 40 years were associated with bleomycin toxicity. Overall 5-year survival was 63% in the patients with bleomycin toxicity and 90% in the other patients (P = 0.001) [1].

M. tuberculosis could have been suspected in our patient based on his childhood spent in Tunisia [3]. Nevertheless, CT of the chest obtained 60 days before ICU admission showed no parenchymal lesions, nodules, or sequelae of tuberculosis. The rate of symptom progression was unusually fast for a patient with tuberculosis.

The cause of acute respiratory failure in ICU patients remains unknown despite extensive investigations in 10–20% of cases [1, 6]. A study has shown that postmortem examination supplied a previously unrecognized diagnosis in 4% of patients overall and in a higher proportion of immunocompromised patients [6, 7]. Also, a recent comprehensive review on rapid growing mycobacteria concluded that the approach to antimycobacterial drugs may be different for various patients with cancer [8]. We believe that similar data are needed in cancer patients with mycobacteria to recognize clinical vignettes highly suggestive of mycobacteria infections allowing early antimycobacterial therapy initiation in patients likely to receive a post-mortem diagnosis.