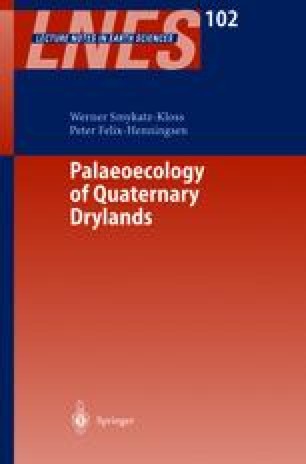 Environmental changes in the Central Sahara during the Holocene - The Mid-Holocene transition from freshwater lake into sebkha in the Segedim depression, NE Niger

The change from a fresh water lake to a sebkha during the middle Holocene was investigated in the Segedim depression/North-eastern Niger using continuous thin sections for micropetrography, palynology and for diatoms. This record is clearly divided into several units showing sequences of laminated anoxic to oxic clays, the stage of a sebkha with an inflow of loess, fine broken quartz grains and salts which are covered by dune sands made of rounded and clay covered quartz. The mineral assemblages of the three principal units are defined by the illite/kaolinitecalcite/aragonite-pyrite association (oxic lake), a kaolinite-calcite-halite-anhydrite (anoxic lake) and a montmorillonite-celestine-sodium carbonate-gypsum association connected to the sebkha. The composition of the sediments indicates a remarkable influence of sedimentation (ashes, phytoliths, charcoals, carbonates).

The diatom assemblages equally show the passage from fresh to saline water. The pollen spectra indicate the change from the Saharan savannah to desert vegetation.

These observations allow to distinguish the local and regional factors in the landscape ecology in order to detect the human impact and its influence on landscape changes in contrast to climatic changes. During the period of climatic degradation at about 6900 B.P., the influence of repeated fires could have had irreversible effects on the landscape formation.

Dune Sand Diatom Assemblage Freshwater Lake Pollen Spectrum Diatom Frustule
These keywords were added by machine and not by the authors. This process is experimental and the keywords may be updated as the learning algorithm improves.
This is a preview of subscription content, log in to check access.