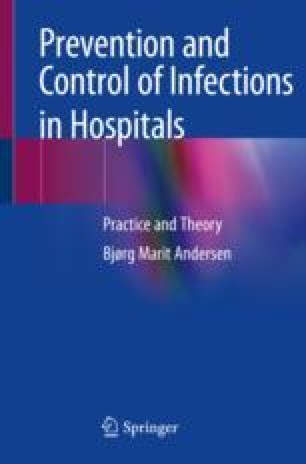 Scenarios for serious, infectious diseases are important procedures used to understand the special microbe’s behaviour (clinical illness, spread of infection, etc.) and how to act most rational during special dangerous outbreaks. Furthermore, scenarios describe how to handle patients, personnel and others possibly exposed to infections,- outside and inside the hospital- to stop spread of the infection as soon as possible. Today, it is not acceptable to place a patient with a known high-risk, serious infection in the same hospital room as other patients with not the same disease (WHO). In this chapter, some seldom but realistic scenario is described to better understand how to react and treat patients to stop spread of microbes during the primary phase of dangerous transmittable diseases.

The hospital’s management provides written plans for how to react in situations where personnel and others may be exposed to known/unknown serious communicable disease and a practical arrangement for how to handle the situation.

The infection control officer at the level of where the problem occurs, and at the departments/ward where the infection may spread, is responsible for following local emergency plans.

Personnel who unprotected have come in a seriously contagious situation and may have been exposed to infectious agents are responsible for contacting the nearest responsible/infectious unit for advice and of following written guideline and practical advice.

Example: person from Liberia visiting relatives in Oslo in spring 2014. Sick 10 days after arrival in Oslo. He attended a number of family gatherings. At the onset of disease (fever, respiratory symptoms and skin bleeding), he lived with a family of eight people in Oslo. Medical contact was taken after 3 days of illness. In all, there had been 20 contacts with the patient after he became ill, and before Ebola virus, infection was suspected. He was admitted directly to the isolate for airborne infections with direct access from outside. Ambulance staff was pre-equipped (PPE) for transport of patients suspected of VHF. The municipality’s infection control doctor is notified and takes responsibility for the message, measures and follow-up outside the hospital together with the emergency preparedness group for the municipality.
Contacts are differentiated after infection risk:

If probable or verified VHF, inform the contacts—low chance of infection:

82.5.2.1 Patient: Isolated in Accordance with Bacterial Type and Routines (Contact and/or Air Isolated)

In hospital, not usually many at the same time, but dependent on endemic situation. The patient can be contact or air isolated, depending on the infectious agent.
Contacts/carriers—differentiated follow-up—low chance of getting sick:

82.5.3 Notification of Air Passengers with “Cholera” at Oslo Airport

Example: Three people in a Norwegian travel company get voluminous, watery, painless diarrhoea on return from Bangladesh, just before landing at Oslo Airport, Gardermoen. Due to a loss of fluid, they were transported with an ambulance equipped for “import infection” and admitted directly into contact isolation. Municipal infection control doctor is notified and is responsible for reporting, measures and follow-up outside the hospital together with the municipal emergency response group.

This is one of the old, major quarantine diseases. Only a few get sick (top of the iceberg), i.e. 1–4 patients out of 1000 infected. There is a low mortality by proper treatment (<5%). The transmission risk is relatively low due to good hygiene and good sanitation in today’s Norway and other developed countries. Most patients are shedding bacteria in large amounts and are also carriers without symptoms. Patients are isolated with contact isolation regimens.

The infection can reach unmanageable heights in disaster areas, by hunger, contaminated water supply and destroyed infrastructure. Following the natural disaster in Haiti, cholera was introduced with infected helper crew from Asia (carriers), and an epidemic started in 2010, which in 2013 had increased to 670,000 cholera patients, 370,000 hospitalized and 8200 deaths [17].
Contacts/carriers of infection—low chance of getting sick:

82.5.4 Diphtheria After a Bus Trip to Moscow

Example: An elderly woman who recently attended a bus trip to Moscow became sick 2 days after returning to Oslo. She had sore throat, fever, cough and eventually a white, firm-sitting “plaque” in the throat. She was hospitalized after 3 days because of suspected diphtheria. Contact persons and other close contacts were contacted for follow-up and treatment with erythromycin (according to resistance pattern).

Municipal infection control doctor is notified and is responsible for reporting, measures and follow-up outside the hospital together with the municipal emergency response group.

Diphtheria may still be periodic problems in Eastern Europe and many places in the world. Vaccination status is good in children in most countries but more uncertain in elderly, especially in women. This is a contact and airborne infection, relatively highly infectious. There are probably few cases in an outbreak due to herd immunity. Patients are isolated with air and contact isolation regime until free from bacteria (negative culture). A historically serious infectious disease also in Norway, with high mortality rates until the middle of the last century [18]. Ullevål Hospital, Oslo, introduced treatment with the diphtheria serum in 1914 and achieved an impressive response—from 20–35% mortality to 3–5% [19].
Contacts/carriers of diphtheria are differentiated—vaccination protects against disease:

82.5.5 Lung Pest Plague After Stay in Madagascar, Sick on the Plane Home

Example: A person of a family of five who has stayed in Madagascar for a month got sick on his way home to Norway. He coughs, has fever and develops skin rashes that resemble big boils, especially in the groin. He was admitted directly to strict isolation in hospital and suspected of serious import infection.

The municipal infection control doctor is notified and is responsible for reporting, measures and follow-up outside the hospital together with the municipal emergency response group.
All close contacts/carriers are isolated to infection state is clarified—little chance of getting sick:

82.5.6 Anthrax After Staying in Turkey, Sick on the Plane Home

Example: Two out of six people who have been on family visits in Turkey for a week, on farms with goats and skin production, are acutely ill on the plane home with cough, shortness of breath and fever. Upon arrival, the emergency outpatient clinic was contacted by the patients who were immediately transferred to intensive care unit for airway symptoms and suspected import infection. At the hospital, anthrax is suspected, and patients are strictly isolated in air isolate and treated.

Municipal infection control doctor is notified and is responsible for reporting, measures and follow-up outside the hospital together with the municipal emergency response group.
Contacts/carriers—low risk of getting sick:

This is an endemic problem among wild animals in most countries. Person-to-person transmission is unlikely. It is almost never reported more than one case at a time, infected by animal bites or licking but occasionally without known exposure. Close contacts/exposed persons are registered.
Contacts/exposed—low chance of getting sick:

Patients and contacts are treated just like at VHF.

If the infectious agent is unknown, transmission ways are unknown and the situation is uncertain or uncontrollable, this practical measure may be followed:

Cite this chapter as:
Andersen B.M. (2019) Scenarios: Serious, Infectious Diseases. In: Prevention and Control of Infections in Hospitals. Springer, Cham