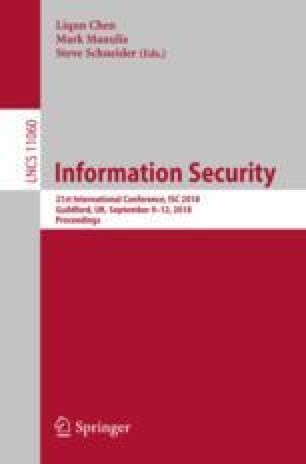 Dynamic analysis of Android malware suffers from techniques that identify the analysis environment and prevent the malicious behavior from being observed. While there are many analysis solutions that can thwart evasive malware on Windows, the application of similar techniques for Android has not been studied in-depth. In this paper, we present Lumus, a novel technique to uncover evasive malware on Android. Lumus compares the execution traces of malware on bare metal and emulated environments. We used Lumus to analyze 1,470 Android malware samples and were able to uncover 192 evasive samples. Comparing our approach with other solutions yields better results in terms of accuracy and false positives. We discuss which information are typically used by evasive malware for detecting emulated environments, and conclude on how analysis sandboxes can be strengthened in the future.

Appendix - Action Types and Its Operations and Arguments

Behavior is represented by actions, where each action is a tuple \(a = (action\_type,\) operation, argument), and action_type is one of {Network, File, Intent, Exec, Phone, Dex, Billing, Multimedia}. Action types, as well as its operations and arguments are described below.

File. The monitored operations on files are WRITE and DELETE, and the argument of both is the file path.

Intent. Intent-related operations include ACTIVITY, SERVICE, BROADCAST and ALARM. The argument for all these operations is the “action” argument of the Intent or the destination class of the Intent. ALARM operations refer to the use of AlarmManager to send Intents.

Exec. This action type represents the launch of the execve system call, which is used by the API methods ProcessBuilder.start and Runtime.exec. The argument used is the name of the executable file being invoked.

Phone. This action represents the use of phone capabilities. We currently consider only one operation of this type (sending SMS messages); the argument is the destination number of the message.

Dex. This action type represents the use of dynamic code loading and its argument is the path of the file being loaded.

Billing. This action represents the use of the billing functionality; the argument is the type of action performed.

Multimedia. The operations included in this action type are CAMERA, AUDIO and WAKELOCK. The argument in these cases is the type of action being performed, which includes taking pictures, recording videos, recording audio, or acquiring wake locks.