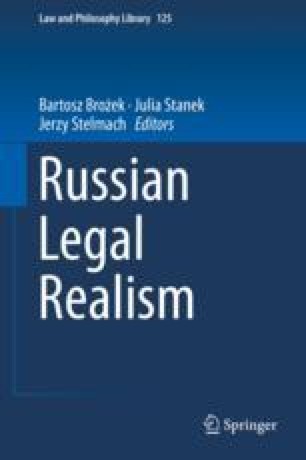 The fate of L. Petrażycki’s psychological theory of law and morality is quite dramatic. He was a scientist who developed a theory that was regarded as too subjective by those of his contemporaries who sought an appropriate foundation for legal phenomena. Afterwards, his psychological theory was interpreted in the context of the intuitivist currents in general philosophy, especially H. Bergson’s “philosophy of life” and E. Husserl’s phenomenology. This path was chosen by the most famous followers of L. Petrażycki, namely N. N. Alekseev and G. D. Gurvitch. However, from the contemporary perspective, Petrażycki’s psychological theory of law and morals should be interpreted differently, rather in light of the modern naturalistic understanding of consciousness and intentionality. An influential conception of this kind was proposed by the American philosopher J. Searle. Searle’s conception of the mental and the social provides arguments against the standard critique of Petrażycki’s ideas, focusing on the unacceptable psychologism and subjectivism of his approach.