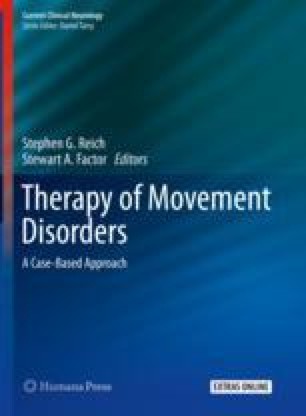 Treatment of Diplopia in Parkinson’s Disease

Diplopia is a common although underappreciated symptom in Parkinson’s disease (PD). It is usually due to a combination of convergence insufficiency and an exophoria. It typically presents with horizontal diplopia, worse at near, which resolves if either eye is closed. It is essential to rule out alternative causes of diplopia unrelated to PD (e.g., myasthenia gravis) as well as recognize and treat other comorbid causes of visual impairment encountered in PD such as dry eye or blepharitis. Convergence insufficiency can be managed with a base in prism, and if ineffective, patients can keep one eye closed, wear an eye patch, or occlude one lens of reading glasses.

The first part of the video demonstrates the alternate cover test. When the occluder is moved between the eyes, the uncovered eye (which when occluded drifted out) adducts to fixate on a near target confirming the presence of an exophoria. Although not shown there is no ophthalmoparesis. The second part demonstrates impaired convergence (MPG 9130 kb)