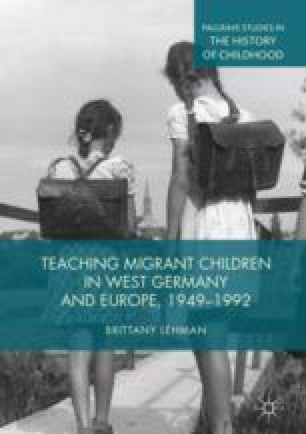 During the late 1960s, education reform swept the European continent. Responding in part to the 1968 revolutions, the United Nations and the Council of Europe both encouraged integration and emphasized host countries’ responsibility for ensuring human rights for all residents as opposed to citizens. Among other measures, they pushed education opportunity through secondary school in order to enable children to access the workforce. The Länder Ministries responded by encouraging its non-German population to integrate. Yet, looking at the growing Turkish population, most Länder governments assumed these children too culturally distant to fully integrate, turning Turkishness into the antithesis of Germanness precisely as the Turkish government began its Turkification campaigns.

OECDOrganisation For Economic Co-operation And Development (OECD) ghettoGhetto West German School System Hauptstaatsarchiv Stuttgart European Community (EC)
These keywords were added by machine and not by the authors. This process is experimental and the keywords may be updated as the learning algorithm improves.
This is a preview of subscription content, log in to check access.