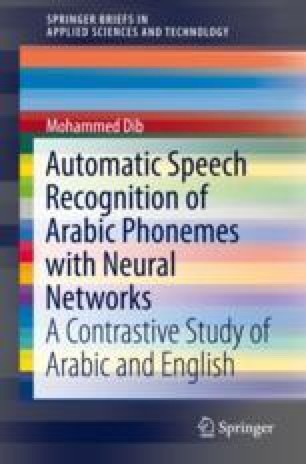 A Contrastive Phonological Study of English and Arabic

Languages are different from each other in terms of systems: phonetic, phonological, morphological, syntactic and semantic. This is due to the physical and the social environment in the Sapirian theory and to the parametric variations in Chomskian theory, where speakers use nouns and verbs, for instance, as heads or tails in sentences or the opposite. This denotes that the speakers’ brains are in a certain state, in the sense that language is a cognitive system which is a part of any normal human beings mental or psychological structure. The focus in this chapter is made on the different structure of the speakers’ brains with regard to the diphthong. For example what is considered as a diphthong, i.e. a vowel, in English is regarded as a syllable in Arabic.

Cite this chapter as:
Dib M. (2019) A Contrastive Phonological Study of English and Arabic. In: Automatic Speech Recognition of Arabic Phonemes with Neural Networks. SpringerBriefs in Applied Sciences and Technology. Springer, Cham. https://doi.org/10.1007/978-3-319-97710-2_4