Early Global Interconnectivity across the Indian Ocean World, Volume I 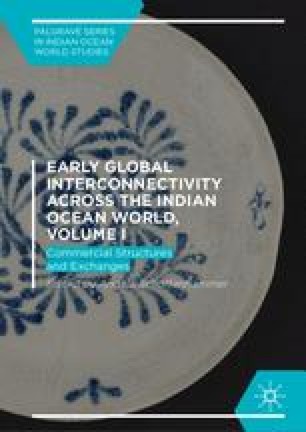 Early Global Interconnectivity across the Indian Ocean World, Volume I pp 79-95 | Cite as

“He Did Not Kiss the Earth Between His Hands”: Arabic Sources on the Arrivals of the Zheng He Fleet in Aden and Mecca (1419–1432)

Barely any period in Chinese history stands as an example of the turning of the country towards the maritime world as does the beginning of the fifteenth century, when the famous treasure fleets under the command of the Eunuch Admiral Zheng He (1371–c. 1433) sailed “down the western seas”. This was not for the discovery of new sailing routes or the establishment of colonies that would become so crucial for the European nations only decades later, but rather the strengthening of China’s political and economic relations along the shores of the Indian Ocean according to the patterns of her time-tested tributary system. While the first three voyages were still mainly confined to the South China Sea and the eastern parts of the Indian Ocean, the latter four reached further west to the Persian Gulf, the Red Sea and the Swahili Coast. An analysis of the circumstances, political encounters, commodity exchanges and dating of the general course of events during those voyages in Arabian waters are the main objective of this paper. New insights and evidence are offered through the integration of so far largely overlooked Arabic sources.

This chapter in part goes back to my magister thesis with the German title Hoher Besuch im Land des Him-melsplatzes: Die Fahrten der Ming-Flotte in die Arabische Welt (1413–1433). Therefore I would in the first place like to express gratitude to my supervisors, Prof. Heinz Gaube and Prof. Hans Ulrich Vogel from Tübingen University. Further thanks go to my wife Cao Jin for her continuous support especially in dealing with Chinese sources.