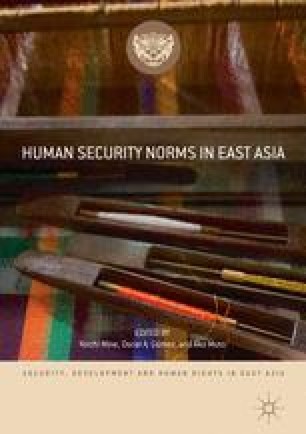 The Concept of Human Security in Vietnam

Human Security Lesbian, Gay, Bisexual And Transgender (LGBT) Human rightsHuman Rights Human traffickingHuman Trafficking Prime Minister Decision
These keywords were added by machine and not by the authors. This process is experimental and the keywords may be updated as the learning algorithm improves.
This is a preview of subscription content, log in to check access.

The Concept of Human Security

The Value of the Concept of “Human Security”

For the first two scenarios, the interviewees were placed in the specific hypothetical situation that his/her country is being affected by each of the above-mentioned scenarios. The question normally asked was whether he/she thinks that his/her country should accept assistance from outside. And then, if the answer was positive, what kind of organizations and what methods did they think would be acceptable to such operations and why?

For the latter two scenarios, the affected area was expanded to the surrounding region of his/her country or another country and its magnitude is supposed to be beyond the control of a single government, risking the lives of many people, and whether the organizations of his/her own country would be able to give effective support. The question is how he/she or their organizations should deal with this situation in the case that the government of the affected country is reluctant to accept foreign assistance.