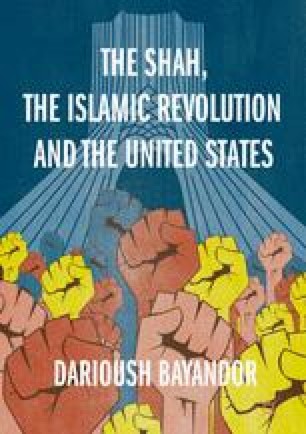 The Shah, the Islamic Revolution and the United States pp 347-355 | Cite as

The United States’ Attempt at Dialogue with Ayatollah Khomeini

This chapter covers the US attempt to establish dialogue with Ayatollah Khomeini in January 1979. The objective of the dialogue, however, was sharply contrasted in the minds of administration principals. For Carter and his national security advisor, the goal was to persuade the Ayatollah not to disrupt the establishment of the Bakhtiar government. The intention of Sullivan and Vance was to prepare the ground for a successful post-Shah relationship. The speed of events in Iran brought the contrasted approaches closer together. In a span of three weeks, the Carter administration’s policy shifted from enthusiastic support for Bakhtiar’s civilian government to vague advocacy of compromise among all factions in a united front against the communist intrusion. As in the past, Khomeini rejected all formulae embracing the existing constitution.

Ayatollah Ruhollah Khomeini Shapour Bakhtiar Fall Down White House Diary Hard Choices
These keywords were added by machine and not by the authors. This process is experimental and the keywords may be updated as the learning algorithm improves.
This is a preview of subscription content, log in to check access.