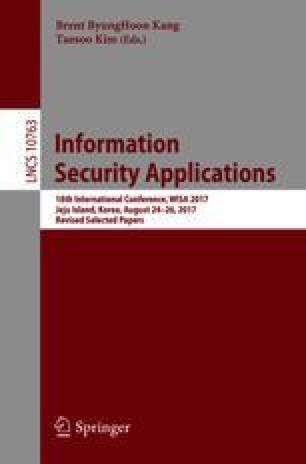 In the age of high performance digital camera and the Internet, digital images have become one of the most popular information sources. Unlike text, images remain an effective and natural communication medium for humans, for their visual aspect makes it easy to understand the content. Traditionally, there has been confidence in the integrity of visual data, such that a picture in a newspaper is commonly accepted as a certification of the news. Unfortunately, digital images are easily manipulated, especially since the advent of high-quality image-editing tools such as Adobe Photoshop and Paintshop Pro. Therefore, digital-image forensics, a practice aimed at identifying forgeries in digital images, has become an important field of research.

To cope with image forgeries, a number of forensic schemes were proposed recently. Most of the previous digital image forensics focused on the low level features that include traces of the image modifying history. They are based on detecting local inconsistencies such as resampling artifacts [14], color filter array interpolation artifacts [2], JPEG compression [3], and so on. The pixel photo response non-uniformity (PRNU) is also widely used for detecting digital image forgeries [1, 6, 7]. There are also some methods for detecting identical regions caused by copy-move forgery [8, 16].

Most of the local inconsistency based methods are vulnerable to the general image processing such as JPEG and GIF compression, white balancing, and noise addition. On the other hand, high-level features such as lighting condition [10], shading and shadows [11] provide fairly robust clues for the forgery detection system against the general image processing. In this paper, we present a forensic scheme to detect the manipulation of images through contextual violation based on high-level objects in target image (See Fig. 1). Relationship information between objects in an image is used as a robust feature that is not affected by general image processing.

Our research proposes a model that can learn the context by learning the image label combination by spatial coordinate. First, we proposed a context learning convolutional neural networks (CL-CNN) that detects the contextual violation in the image. CL-CNN was trained using an annotated large image database (COCO 2014), and learned spatial context that was not provided by existing graph-based context models. In combination with a well-known object detector such as R-CNN, the proposed method can evaluate the contextual scores according to the combination of objects in the image. As a result, our method effectively detects the contextual violation in the target image.

In this research, we proposed Context-Learning convolutional neural networks (CL-CNN) to learn co-occurrence and spatial relationship between object categories. The proposed CL-CNN provides an explicit contextual model through deep learning with large image databases. CL-CNN is learned to return a high-value for the natural (or learned) combination of the object categories, while it returns low value for strange combinations or spatial contexts of the image labels.

The process of generating input data is as follows. We used an annotated image database for object location and category information. Because size of the image is too large to be used, the size is reduced to \( N \times N \), where N < height and width of the input image, to record the position information of the object. The channel size of the input data structure is the total number of categories to distinguish each category. The label defined part is padded with 1 value and the remaining blank area is filled with 0 values.

The structure of CL-CNN is as follows (See Fig. 3). It receives input data of \( 8 \times 8 \times 80\), passes through two convolutional layers, and passes through three fully connected layer. Then the fully connected layer finally outputs \( 2 \times 1\) vector. The first value of the output is a score that evaluates how natural the label is in combination with the category and spatial context, and the second value is the score that evaluates how the category combination and spatial context of the label are awkward. The loss function used Euclidian loss L which is defined by
$$\begin{aligned} L = \frac{1}{2}\sum _i(y_i-a_i)^2, \end{aligned}$$
(1)
where y is the output of the CL-CNN, and a is the label of the data sample.

In order to learn the proposed network, it is necessary to acquire a large amount of datasets. We need to have both a collection of natural labels and a collection of unnatural labels. Moreover, we also need data that shows both the location and type of the object. A dataset that meets these criteria is Microsoft COCO: Common Objects in Context [13]. Microsoft COCO 2014 provides 82,783 training image sets and label information, and 40,504 validation images and label information. This can aid in learning detailed object models capable of precise 2D localization and contextual information.

We propose a method to detect the contextual violation of the target image using CL-CNN. The proposed method operates by combining with the output of the existing object detector such as [4, 5, 15]. Among the above methods, we solved the object detection task based on Faster R-CNN [15]. Using object detection results and probability values, we proposed a system that detects objects that are most inappropriate in the image context. The proposed method is described as follows.

For the experiment, we used sample images collected from the Microsoft COCO: Common Objects in Context [13] as described in Sect. 2.3. The implementation of CL-CNN is based on Caffe library [9].

Experimental results for natural image (positive set) and forged image (negative set) are shown in Figs. 3 and 4. The natural images are from COCO 2014 test database. Since no manipulation was detected, we showed output value with the CL-CNN input contained all the object sets \(\mathcal {P}\) extracted by the detector. For natural image, the average output value was 0.98 or higher. For instance, a combination of vases, indoor tables and chairs is the frequently observed combination in the COCO dataset, so all of them are judged as natural objects as shown in Fig. 7(a). Note that, the appearance rate of people in the training dataset was high, so that an image with some people is tended to evaluate positively by CL-CNN. Therefore, we can see that the output values are somewhat large as shown in Fig. 7(b) and (c).

On the other hand, we made some forged images with arbitrary combination of object classes (See Fig. 4). In Fig. 8(a), a manipulated boat with surrounding cars and trees causes contextual violation. We confirm that the ‘naturalness of the image’ is better when the boat is removed.

However, our framework has some limitations. For example, a cow is manipulated beside a kite in Fig. 8(c). However, in our method, the information that a cow is in the sky is lost during the object detection step. Therefore, both cow and kite are judged to be inappropriate for the image. In Fig. 8(d), horse and baseball bat were manipulated, but only the baseball bat was selected as the awkward object. In this case, other forgery detector such as [2, 3, 14] combined with our method to improve the detection accuracy.

However, the region-based object detector used in this study ignores the background parts, so the context between the object and background cannot be directly evaluated. Therefore, we plan to enhance the accuracy of the study by combining the deep learning based on scene classification such as [12, 17]. In addition, we will improve the model to give more robust and accurate results, with a bit more attention to the generation of negative sets.