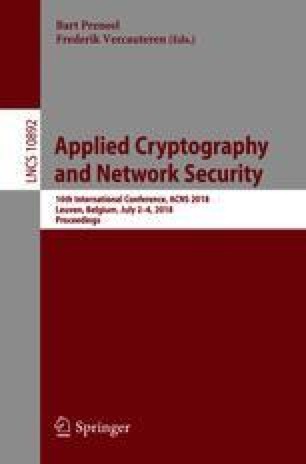 Digital signatures are one of the most important cryptographic primitives. In this work we construct an information-theoretically secure signature scheme which, unlike prior schemes, enjoys a number of advantageous properties such as short signature length and high generation efficiency, to name two. In particular, we extend symmetric-key message authentication codes (MACs) based on universal hashing to make them transferable, a property absent from traditional MAC schemes. Our main results are summarised as follows.

In this section we formally define security in USS protocols. We begin by defining the notion of a dispute resolution process.

In the messaging stage of the protocol all participants are able to check the validity of a message-signature pair without communicating with any other participant. Nevertheless, there may still be scenarios in which disagreements arise regarding whether a message is valid or not. For example, the sender may deny having ever sent a message, even though a recipient who (allegedly) followed the correct procedure found the message to be valid. In these cases, the participants need a method of deciding who is telling the truth. This is done via the dispute resolution process.

Signature schemes must be secure against three types of security threat – forging, repudiation and non-transferability.

We say that the protocol is secure against forging/non-transferability/repudiation if the probability of a dishonest coalition being successful decays exponentially fast with respect to some security parameter.

In this section we prove Theorems 2 and 3 stated in Sect. 4.

In order to break the transferability of the protocol, a coalition C (which includes the signer \(P_0\)) must generate a signature that is accepted by recipient \(P_i \notin C\) at level l, while also being rejected by another recipient \(P_j\notin C\) at a level \(l^\prime < l\).