Theory and Practice of Model Transformation 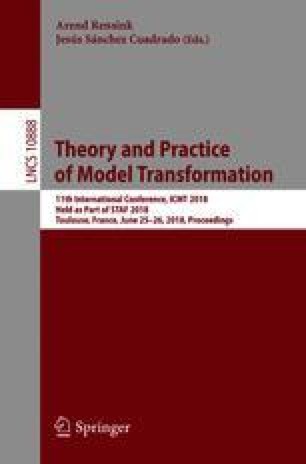 International Conference on Theory and Practice of Model Transformations

Scalable Queries and Model Transformations with the Mogwaï Tool

Scalability of modeling frameworks has become a major issue hampering MDE adoption in the industry. Specifically, scalable model persistence, as well as efficient query and transformation engines, are two of the key challenges that need to be addressed to enable the support for very large models in current applications. In this paper we demonstrate Mogwaï, a tool designed to efficiently compute queries and transformations (expressed in OCL and ATL) over models stored in NoSQL databases. Mogwaï relies on a translational approach that maps constructs of the supported input languages to Gremlin, a generic NoSQL query language, and a model to datastore mapping allowing to compute the generated query on top of several datastores. The produced queries are computed on the database side, benefiting of all its optimizations, improving the execution time and reducing the memory footprint compared to standard solutions. The Mogwaï tool is released as a set of open source Eclipse plugins and is fully available online.

The demonstration presents two typical use cases where the Mogwaï framework significantly improves the execution time and memory consumption of an application computing OCL queries and ATL transformations on top of large models.

First, we briefly introduce the sample model, that is a real-world model obtained by applying model driven reverse engineering techniques on an existing code base. The manipulated model contains around 80 000 elements representing a Java application. Figure 3 shows an excerpt of the metamodel describing the sample. Note that the complete metamodel can be found in the MoDisco repository3.
Then, we present a set of OCL queries to compute against this model. An example of such query is provided in Listing 1.1, that describes the protectedMethod query, which finds in the model all the MethodDeclarations that have a protected Modifier. We show in the demonstration how to initialize and configure the Mogwaï engine to translate and run the query from an existing Java application (Fig. 4). In parallel, we show how the query is computed using the regular Eclipse MDT-OCL interpreter embedded with Eclipse, and emphasize the differences.

Then, we introduce a simple model-to-model transformation defined with the ATL language to compute on top of the sample model (Listing 1.2). This transformation extracts all the ClassDeclaration instances from the input model and maps them to the Table construct of the output metamodel, and sets a unique key that allows to identify a ClassDeclaration instance. A second rule is responsible of transforming each MethodDeclaration into a Column representing the number of calls to the method.

In the demonstration, we show the required steps to initialize the Mogwaï engine with the transformation and compute it against the database storing the model (Fig. 5). In addition, we show how the output model can be stored in another data representation using a different Model Mapping Implementation. We also compare the execution time of computing the transformation using the regular ATL engine with Mogwaï, and show that using our approach can bring significant improvements in terms of execution time.