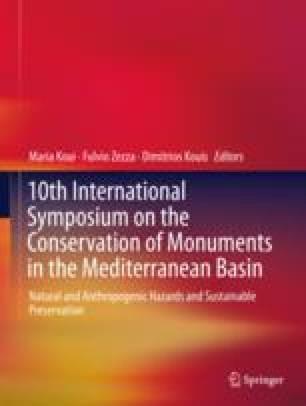 International Symposium on the Conservation of Monuments in the Mediterranean Basin

MONUBASIN 2017: 10th International Symposium on the Conservation of Monuments in the Mediterranean Basin pp 507-514 | Cite as

Rock Characteristics and Weathering of Rock-Cut Monuments in Lycia (Turkey)

The rock-cut architecture of the Lycian culture in Turkey was created around 500 BC to 400 AC. The remains are a testament to their building heritage. The Lycian builders created monumental sarcophagi and tomb facades with unique forms and aesthetic styles in the ancient Mediterranean world. Most of these magnificent monuments are cut into different limestone formations. They are located in an area along the southern coast of Turkey, known as Lycia after its creators.

The rocks as well as the monuments are affected by weathering and disasters, such as the dissolution and precipitation of calcite, biological growth, and earthquakes. To characterize the weathering forms and processes, onsite investigations were done on several rock-cut monuments at four outstanding Lycian sites showing distinct geological characteristics. The investigated sites are Xanthus, Telmessos, Tlos, and Myra. The tombs are built into massive, thickly bedded light gray limestone. The limestones show a wide variety of rock fabrics.

Petrophysical measurements of the porosity and density were performed in the laboratory. Physical ultrasonic velocity measurements and microhardness measurements using an Equotip 3 device were done under dry- and water-saturated conditions.

Weathering due to solution/precipitation is the main threat to the monuments and is strongly connected to the type of limestone. Another key factoris the site-specific climatic condition.