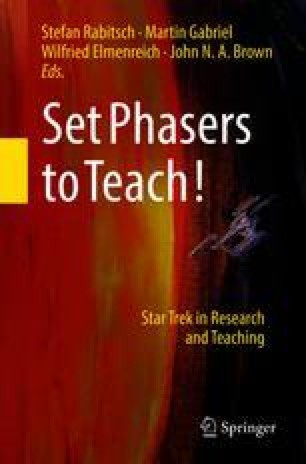 The Energy System in Star Trek and Its Real-Life Counterparts

Generation and provision of energy is an important cornerstone of our civilization. Star Trek also addresses the energy topic multiple times and sketches a modern and powerful energy system, which provides seemingly abundant energy but also comes with significant risk of harming its users. In this chapter, we will address the properties of energy generation and storage in Star Trek and compare it to existing systems, which are in use or planned. The most prominent example are the fictional warp cores which power a starship’s warp drive but also generally serve as power plant on the ship. Several episodes indicate that operating a warp core is a delicate control effort with risk of uncontrolled reaction depicted as “warp core breach”, which shows a number of parallels to properties of modern day nuclear power plants. On the other hand, warp systems are typically explained as reaction chamber for matter-antimatter annihilation, which makes them a very powerful battery rather than a primary generator of energy. This raises the question how the energy for generating the antimatter was produced in the first place. An investigation on the required power vs. the available power on a planet such as Earth reveals a big gap between Star Trek fiction and possible reality. Furthermore, we will analyze the energy and power requirements of an exemplary Star Trek spaceship with a focus on the impulse propulsion system. Based on this analysis we will elaborate the properties of an energy system that is able to fulfill these requirements and look for promising technologies allowing the realization of such a system in the future.