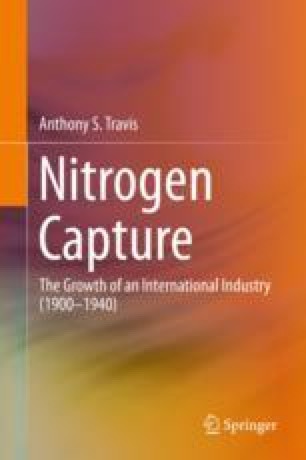 Catching Up: Mainly Italy, Japan, and the Soviet Union

The synthetic nitrogen industry emerged mainly in Germany with the availability of novel furnaces, ovens, and autoclaves, improved knowledge of gas reactions, and the application of sophisticated engineering techniques to chemical processing. This and the need for fertilizers provided the stimulus for the development of heavy chemical industry at new locations, notably in Italy and Japan. In the historical literature, these nations are invariably portrayed as latecomers in industrialization. However, the fact often overlooked is that the involvement of Italy and Japan in hydro-electricity and nitrogen around 1900 established their chemical industries among the world leaders within a decade, and stimulated moves into high-pressure ammonia processes. As for the Soviet Union, despite the ravages of Stalinism and ideological battles, mainly framed in starkly personal terms, tremendous advances were made in industrialization by the 1930s, based on the need for artificial nitrogen products required in a highly politicised system of agriculture, with its mechanized collectives. These three countries, Italy, Japan and Russia, whose representatives and entrepreneurs were unable to gain access to BASF technology, or considered the cost extortionate, demonstrate how the late growth of their modern chemical industries was based on the global circulation of rival nitrogen technologies.

Cite this chapter as:
Travis A.S. (2018) Catching Up: Mainly Italy, Japan, and the Soviet Union. In: Nitrogen Capture. Springer, Cham