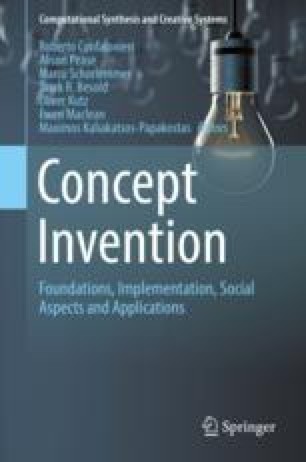 In cognitive science the theory of conceptual blending provides an explanation of the human ability to invent concepts. This cognitive theory provides an inspiration for computational concept invention theory, which has the goal of building creative systems that generate new concepts automatically. In Chapter 3 we discuss a workflow for a system that (a) creatively blends two concepts into a new concept, (b) identifies conflicts, (c) resolves conflicts by generalising the input spaces, and (d) evaluates the new concept against requirements.

One critical question for the development of such a system is the choice of an appropriate representation of the conceptual blend and the other steps in the workflow. For this purpose we use the Distributed Ontology, Model and Specification Language (DOL). DOL is a metalanguage that enables the reuse of existing ontologies as building blocks for new ontologies and, further, allows the specification of intended relationships between ontologies. One important feature of DOL is the ability to combine (blend) ontologies that are written in different languages without changing their semantics.