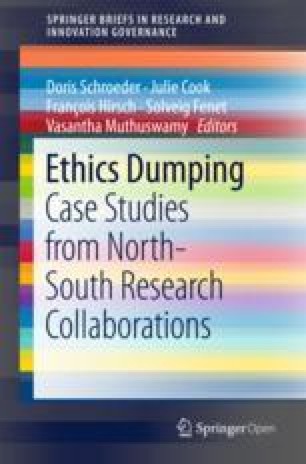 The research and development of any “new” agricultural crop created using genetic modification technologies, even if undertaken with the best of intentions, is accompanied by novel human health, environmental, social, economic and other risks . To date, much of the research that has accompanied the release of genetically modified (GM) crops has focused on the environmental and health impacts. Evidence has been inconclusive, however, with debates remaining highly divided and contested, and each “camp” presenting evidence to support its position.

The case presented here does not attempt to elucidate the various positions in the debate, but rather concerns the research process of developing a GM “vitamin-enriched” food for cultivation in a low- or middle-income country (LMIC). It raises questions not only about the ethical complexities of participant involvement in such trials, but also about the ethics of how Northern researchers and philanthropic organizations determine research priorities without necessarily involving the affected LMICs. The case relates to a proposed food trial involving students at a North American university and a banana enriched with a vitamin A precursor, beta-carotene, through genetic modification. The ultimate goal of the study was to roll out the transgenic banana to Uganda, a country where vitamin A deficiency was seen by the researchers and funders involved as a major nutritional challenge.

This case brings up questions about exploitation risks to human participants, and also fuels debates about potential impacts on hunger and nutrition in the intended country of release. By highlighting differences between the concepts of food security and food sovereignty (see table below for definitions), the case illuminates two very different approaches to addressing poverty-induced hunger and malnutrition. Food security, supported by institutions such as the World Bank, the G8-led New Alliance for Food Security and Nutrition and large consumer companies, is described by critics as “nutritionism”, and is “understood as a set of ideas and practices that seek to end hunger not by directly addressing poverty, but by prioritizing the delivery of individual molecular components of food to those lacking them” (Patel et al. 2015:22). In contrast, food sovereignty aims to reduce malnutrition through an emphasis on diversification and the importance of peoples and countries defining their own food and agricultural priorities, taking into consideration local social, economic, ecological and cultural aspects. Food sovereignty is supported by a growing movement supportive of farmers’ rights, women’s empowerment and agroecological approaches to farming.

Areas of Risk of Exploitation

This case raises two sets of issues relating to risk of exploitation.

Risks of Participating in the Food Trial

The first set of risks pertained largely to the trial participants in the high-income country (HIC) where the trials were planned. They related to:

The second set of risks pertained to the potential release of the transgenic fruit in Uganda, in the context of pursuing “nutritionism” as a research priority. These include:

In early 2014, an US university sent an email to all female students, wanting to recruit 12 volunteers for a transgenic food trial. According to Leys (2014), participants were requested to eat a diet provided by the researchers, which included genetically modified bananas, for four days during each of three study periods. They would have their blood drawn to test whether the fruit’s enhanced beta-carotene content translated into higher vitamin A levels in their bodies (AGRA Watch 2016; Gimenez et al. 2016). In return for their participation, the students were offered USD 900. According to a local paper, The Des Moines Register, more than 500 applications were received, from whom 12 volunteers were selected (Leys 2015).

The main aim of the study, funded by the Bill and Melinda Gates Foundation (BMGF), was to assess the efficacy of the banana for eventual roll-out in Uganda, an East African country where bananas are a staple food. According to the lead scientist at the US university, the transgenic banana included a gene taken from a sweet variety of banana which naturally produces large amounts of beta-carotene. Residents of Uganda use the less sweet cooking banana as a staple, hence the selection of this type to be genetically modified by the researchers.

Members of non-governmental organizations heard about the proposed study and, along with journalists at The Des Moines Register, demanded to know more about it. Initially the lead researcher declined to share information about the study design, claiming that disclosure would be detrimental to her chances of publication (Leys 2014). She relented later, however, stating through a university spokesperson that she had led a similar study five years previously, with six women eating porridge made from corn also modified to produce high levels of beta-carotene (Li et al. 2010).

The proposed food trial, and particularly the initial lack of transparency surrounding it, gained a lot of attention on the US campus, prompting a coalition of concerned students to protest. In collaboration with a number of non-governmental organizations, the students delivered a 57,000-signature petition to the relevant Agriculture and Life Sciences college and to the Gates Foundation’s headquarters in February 2016. The students questioned the transparency, risks, and generalizability of the trial, and maintained that prior informed consent had not been obtained from the participants (AGRA Watch 2016). Another exploitation risk hinged on the USD 900 fee, a relatively large sum of money, which could have unduly incentivized students who were not financially secure to take part in the study.

As this was the first human feeding trial of a GM product that had not been tested on animals, the students were being asked to consume a product of unknown safety (Kruzic et al. 2016). Concerns were also expressed about the potential health risks for women of childbearing age. A molecular biologist based at the Salk Institute for Biological Studies commented:

Beta-carotene is chemically related to compounds that are known to cause birth defects and other problems in humans at extremely low levels, and these toxic chemicals are possible – if not likely – by-products of plants engineered to make large amounts of beta-carotene. Since there is no required safety testing of the banana or any other genetically modified organism, doing a feeding trial in people, especially women, should not be allowed (AGRA Watch 2016).

Concerns were also raised about the social, economic and environmental impacts of the proposed study. According to Eric Gimenez, executive director of the Institute for Food and Development Policy, such questions

recognise that hunger and malnutrition are not just biological or technical challenges, they are social problems rooted in poverty, inequality and a skewed distribution of resources. Ending hunger can’t be reduced to simple gene transfers, and the socioeconomic and agroecological impacts of GM go far beyond the single crops in which they are genetically expressed (Gimenez et al. 2016).

Such concerns were linked to wider issues about the nutritionism approach adopted through biofortification.1 Proponents of biofortification recommend its use, especially in staple crops, to complement conventional fortification2 activities, particularly in targeting the undernourished in remote rural populations (Bouis et al. 2011; WHO 2016 ).

Critics of this approach maintain that malnutrition is best countered with a diet based on a diverse variety of foods, and label biofortification as “a strategy that aims to concentrate more nutrients in few staple foods … [and] may contribute to further simplifying diets already overly dependent on a few carbohydrate staples” (Johns and Eyzaguirre 2007:3).

Such views have been supported by the much-studied example from the Philippines and elsewhere of Golden Rice, also fortified with beta-carotene. Stone and Glover (2017), for example, observe that the developers of Golden Rice have yet to produce GM varieties that yield as well as existing varieties, and maintain that the storage qualities of the biofortified rice remains unknown, as does the probability of the beta-carotene being converted into vitamin A in the bodies of severely undernourished children.

Aside from questions about the efficacy of the eventual banana product, concerns were also expressed about the risks of undermining local food systems and reducing banana agrobiodiversity. This is especially pertinent considering that East Africa is regarded as a secondary centre of banana diversity (after India), with Uganda being the largest producer and consumer in the region (Gold et al. 2002). If the GM banana variety were to be adopted in Uganda, it would most likely be grown as a monoculture, impacting food security through the erosion of genetic diversity. A significant body of research indicates that diverse plant communities preserve genetic potential for the selection of desirable traits, and also withstand plant pathogens better than monocrops (see e.g. Zhang et al. 2007; Cardinale et al. 2012). Uganda is home to banana varieties that are already higher in beta-carotene than the proposed GM variety. In addition, with the country situated in a fertile, tropical zone, the cultivation of foods naturally rich in beta-carotene, such as sweet potatoes, leafy vegetables and certain types of fruit, offers affordable, healthy, culturally acceptable and locally produced ways of avoiding nutrient deficiency.

This case yields a number of valuable lessons across high-, middle- and low-income country scenarios for:

With regard to the trials conducted in a HIC, the case reveals the importance of ensuring that trial participants make decisions based on a full set of information, and also of examining the rationale behind such trials and fully exploring potential risks to participants. It also suggests that debates about healthy volunteers extend into the domain of agricultural research, a field which is surprisingly undeveloped in the realm of ethics.

With regard to the impacts of such research in LMICs, the case shows that research driven from HICs and by philanthropic donors should be sensitive to local peoples’ rights to self-determination of their food systems, and to alternative approaches to addressing nutrient deficiencies. In the words of a concerned Ugandan, “Just because the GM banana has been developed in Australia and is being tested in the US does not make it super! Ugandans know what is super because we have been eating home-grown GM-free bananas for centuries. This GM banana is an insult to our food, to our culture, to us a nation, and we strongly condemn it” (Leys 2015).