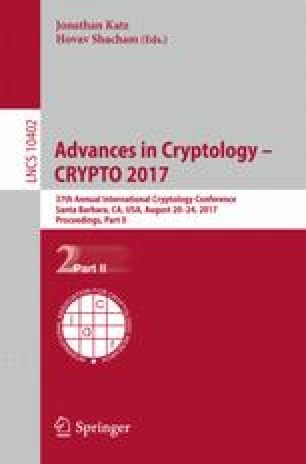 The Keccak hash function is the winner of the SHA-3 competition and became the SHA-3 standard of NIST in 2015. In this paper, we focus on practical collision attacks against round-reduced Keccak hash function, and two main results are achieved: the first practical collision attacks against 5-round Keccak-224 and an instance of 6-round Keccak collision challenge. Both improve the number of practically attacked rounds by one. These results are obtained by carefully studying the algebraic properties of the nonlinear layer in the underlying permutation of Keccak and applying linearization to it. In particular, techniques for partially linearizing the output bits of the nonlinear layer are proposed, utilizing which attack complexities are reduced significantly from the previous best results.

A.1 Techniques of GPU Implementation Optimization

Memory Optimizations. Usually registers have the shortest access latency compared with other memory, so keeping data in registers as much as possible improves the efficiency in general. However, dynamically indexed arrays cannot be stored in registers, so we define some variables for the 25 lanes by hand in order to have them stored in registers. Constant memory is a type of read-only memory. When it is necessary for a warp of threads read the same location of memory, constant memory is the best choice. So we store 24 round constants on it. When the threads in a warp read data which is physically adjacent to each other, texture memory provides better performance than global memory, and it reduces memory traffic as well. So we can bind input data and some frequent accessed read-only data with texture memory.

Instruction-Level Parallelism. From [24], hashcat, and ccminer, we see that forcing adjacent instructions independent gives better performance. Without prejudice to the functions of the program, we can adjust the order of instructions to improve the efficiency of the operations. In addition, loop unrolling [17] is also a good practice to obtain ILP.

A.2 Hardware specification sheet of GPU

The hardware specification sheet of GTX1070 and GTX970

B Algorithm for Searching Differential Trails

Collision for 5-round Keccak-224

Differential trail used in the collision attack of 5-round Keccak-224. The total probability is \(2^{-45.62}\) considering multiple trails of the last two rounds. After collisions were obtained, we found that the trail obtained by cyclically rotating this one 22 bits to the right has a better probability of \(2^{-44.59}\).

In this section, we give details of differential trails used in our attacks and the obtained collisions. The 1600-bit state is displayed as a \(5\times 5\) array, ordered from left to right, where ‘|’ acts as the separator; each lane is denoted in hexadecimal using little-endian format; ‘0’ is replaced with ‘-’ for differential trails.
Table 8.