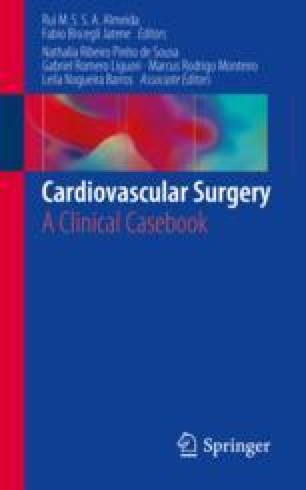 After hemothorax and pneumothorax drainage, laparotomy with splenectomy, and raffia of the liver, the patient was stabilized. Besides, patient was treated with ceftriaxone and cefepime due to suspicion of lung bacterial infection.

Overall, patient was in good general condition, receiving mechanical ventilation via an endotracheal tube but presenting fever episodes. The ventilatory examination was tachydyspnea, with breath sounds reduced diffusely and saturation of 92%. After cardiovascular semiology examination, patient had pulmonary hypertension and high blood pressure, being administered Sodium Nitroprusside, Losartan and Atenolol.

After 9 days of admission, the patient developed acute respiratory failure following extubation attempt, with presence of foamy secretion in the endotracheal tube. Vasoactive drugs were required due to refractory hypotension. Transthoracic echocardiogram was perfomed and showed an image in the posterior leaflet of the mitral valve, acute mitral regurgitation and acute heart failure. Antibiotic therapy (daptomycin) and assessment of cardiac surgery were requested. During the procedure laceration of the papillary muscle of the mitral valve was observed, and it was replaced with a 29 mm bioprosthesis.

Recovery was well established, but the patient had unexplained fever peaks. By physical assessment, an extensive pressure ulcer grade II in the sacral region and in the right buttock was found.

After the fifth day of surgery, patient had no dysfunction of the bioprosthesis and left ventricle ejection fraction of 64% but showed mediastinal abscess observed thru echocardiogram. Patient presented progressive improvement after abscess washing and draining and was discharged on the 14th day, due to improvement of cardiac condition.