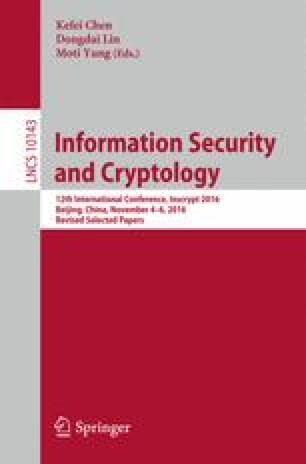 On Fast Calculation of Addition Chains for Isogeny-Based Cryptography

Addition chain calculations play a critical role in determining the efficiency of cryptosystems based on isogenies on elliptic curves. However, finding a minimal length addition chain is not easy; a generalized version of the problem, in which one must find a chain that simultaneously forms each of a sequence of values, is NP-complete. For the special primes used in such cryptosystems, finding fast addition chains for finite field arithmetic such as inversion and square root is also not easy. In this paper, we investigate the shape of smooth isogeny primes and propose new methods to calculate fast addition chains. Further, we also provide techniques to reduce the temporary register consumption of these large exponentials, applicable to both software and hardware implementations utilizing addition chains. Lastly, we utilize our procedures to compare multiple isogeny primes by the complexity of the addition chains.

The authors would like to thank the reviewers for their constructive comments. This material is based upon work supported by the NSF CNS-1464118 and NIST 60NANB16D246 awards.

A.1 Addition Chains for Inversion

Finite-field inversion finds some \(A^{-1}\) such that \(A\cdot A^{-1}=1\), where \(A,A^{-1}\in \mathbb {F}_{p}\). This can be computed using Fermat’s little theorem, which shows that \(A^{-1}=A^{p-2}\). Addition chains can be used to efficiently evaluate these large powers in a constant set of operations, to protect against timing attacks and simple power analysis attacks.

A.2 Fast Computation of Square Root