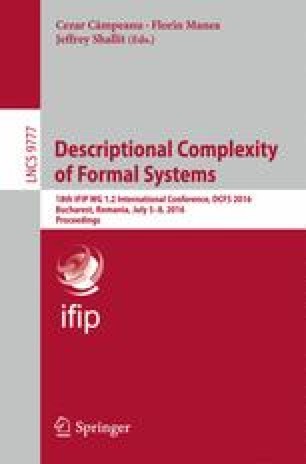 Weak Recognizability Simple Semigroup Inﬁnite Words Nondeterministic Finite Automaton ﬁnite Words
These keywords were added by machine and not by the authors. This process is experimental and the keywords may be updated as the learning algorithm improves.

Bounds for the descriptional complexity of various operations.

This section gives a brief overview of some basic definitions from the fields of formal languages, finite automata and semigroup theory. We refer to [10, 11] for more detailed introductions.

Automata. A finite automaton is a 5-tuple \(\mathcal {A}= (Q, A, \delta , I, F)\) where Q is a finite set of states and A is a finite alphabet. The transition relation \(\delta \) is a subset of \(Q \times A \times Q\) and its elements are called transitions. The sets I and F are subsets of Q and are called initial states and final states, respectively.

We use the term run for both finite and infinite runs if the reference is clear from the context. A language \(L \subseteq A^*\) (resp. \(L \subseteq A^\omega \)) is regular (resp. \(\omega \) -regular) if it is accepted (resp. Büchi-accepted) by some finite automaton.

Finite semigroups. A semigroup morphism is a mapping \(h :S \rightarrow T\) between two (not necessarily finite) semigroups S and T such that \(h(s)h(t) = h(st)\) for all \(s, t \in S\). Since we do not consider morphisms of other objects, we use the term morphism synonymously. A subsemigroup of a semigroup S is a subset that is closed under multiplication. We say that a semigroup T divides a semigroup S if there exists a surjective morphism from a subsemigroup of S onto T.

We first prove a combinatorial lemma and then give the main result of this section.

The next proposition is another simple, yet useful, tool for proving lower bounds. It allows to transfer bounds from the setting of finite words to infinite words.

The full automata technique is a useful tool for proving lower bounds for the conversion of automata to other objects. It was introduced by Yan [14] who attributes it to Sakoda and Sipser [12]. The technique works for both accepted and Büchi-accepted languages. However, we will prove the main result of this section only for the setting of finite words and use Proposition 4 to obtain analogous results for infinite words.

4 From Automata to Weakly Recognizing Morphisms

Noting that the transitions labeled by the letter \(\left\{ (q, q) \mid q \in N\right\} \) form self-loops at each state, the Büchi case immediately follows by Proposition 4.   \(\square \)

The proof of the optimality result requires a large alphabet that grows super-exponentially in the number of states of the automaton. A natural restriction is considering automata over fixed-size alphabets.

By a result of Chrobak [3], the size of the syntactic semigroup of an unary language accepted by a finite automaton of size n is in \(2^{\mathcal {O}({\sqrt{n \log n}})}\) (note that since unary languages are commutative, the syntactic monoid is isomorphic to the minimal deterministic automaton). Over infinite words, the unary case is uninteresting since the only language over the alphabet \(A = \left\{ a\right\} \) is \(\left\{ a^\omega \right\} \).

For binary alphabets, a lower bound can be obtained by combining the full automata technique with a result from the study of semigroups of binary relations [7, Proposition 6]. In order to keep the paper self-contained, we present a proof that is adapted to finite automata and does not require any knowledge of binary relations.

The construction above does not reach the \(2^{n^2}\) bound obtained when using a larger alphabet. However, this is not surprising, given the following result.

5 From Weakly Recognizing Morphisms to Automata

The well-known construction to convert weakly recognizing morphisms to finite automata with a Büchi-acceptance condition has quadratic blow-up [10]. We show that this is optimal up to a constant factor.

Rather surprisingly, the established lower bound turns out to be asymptotically tight in the case of simple semigroups. More generally, for simple semigroups, the construction of the strong expansion can be improved such that only \(n 2^n\) elements are needed. This will be proved in the remainder of this section.

The following three technical lemmas capture important properties of the construction and are needed for the main proof.

Another open problem is to close the remaining gaps between the upper and the lower bounds. This is particularly true for the complexity of complementation and the conversion of weakly recognizing morphisms to strong recognition. We showed that there is an exponential lower bound and gave an asymptotically optimal construction for simple semigroups which was a first candidate for semigroups that are hard to complement. It is easy to adapt this construction to families of semigroups where the size of each \(\mathcal {J}\)-class is bounded by a constant. However, for the general case, the gap between \(n 2^{n-1}\) and \(2^{n^2}\) remains.

Beyond that, another direction for future research is to investigate whether any of the bounds can be improved by considering the size of the accepting set, i.e., the number of linked pairs used to describe a language.

We thank the anonymous referees for several useful suggestions which helped to improve the presentation of this paper.