Human Interface and the Management of Information: Applications and Services 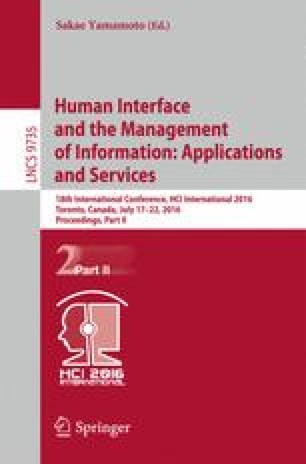 HIMI 2016: Human Interface and the Management of Information: Applications and Services pp 542-549 | Cite as

As computers are becoming increasingly ubiquitous, people are spending more and more time on computers. Information and communication technology has greatly improved, to the point that users can read the news, write reports, play games, or watch sports events while easily switching between these tasks on the same computer. People’s lives’ are made easier this way, but as stated in [1], multitasking is an activity that distracts users and generally has a negative effect on the brain.

For instance, as reported in [5], one college student stated: “I spend so much time on social network sites every day and play games on it that I have to work at night, which increases my stress.” This shows that he cannot control his activities on his computer, even though this lack of control induces irritation. Doidge [4] points out that brains keep their neurons’ routines whether these routines are positive or negative.

It is often said that we become more knowledgeable through obtaining a variety of information from the Internet. However, as part of this process we are often forced to perform quick task switching and multitasking during Web browsing. Small et al. show that the human brain is rapidly changed through Web searching [2, 3]. According to Small’s experiment, users improve some of their capabilities, such as scanning or quickly multitasking. Yet, Ophir et al. state that digital media heavy multitaskers are more likely to be distracted by irrelevant environmental stimuli than light multitaskers [7]. This research indicates that their capabilities, such as concentrating or memorization, are diminishing.

Hence, multitasking and negative routines have a negative effect on users. However, most users are not aware of this effect. We intend to develop a system that analyzes user activity on a computer and then provides users with a visual representation of the results.

Our system has the following two main functions.

Figure 1a shows an overview of our system. First, it records computer activity data (using free software such as Manictime [11] or Kidlogger) and at the same time monitors the user’s heart rate using a ready-made activity tracker. Next, it analyzes the collected data.

We log the user’s computer activity using an application such as Kidlogger or Manictime [11, 12]. The software generates a log every time a user opens a new window or switches between already opened windows. Each log record includes the starting time and duration of the active window, the name of the application, and a URL (if the window is a Web browser tab), as well as the duration of inactivity. We export raw data as a csv file and use it in our system. Figure 1b shows sample computer logs.

We propose a method of detecting multitasking and negative routines. Two indicators are used for this: relax rate and multitasking rate.

Heart Rate Variability and Relax Rate. We use heart rate information to measure stress. Heart rate variability (HRV) is considered a valid indicator of mental stress in clinical studies [9, 10]. One of the variables used to calculate HRV is the standard deviation of the NN interval (SDNN). NN interval is the interval between two consecutive beats. In medical research, NN intervals per beat are observed by biosensors. However, we do not use precise NN intervals in our research. If we want to observe precise NN intervals, we need to use a large sensor (e.g., one that requires a chest strap), however this is likely to be burdensome for most users. A wrist-worn activity tracker such as Fitbit Charge HR is better, yet this tracker cannot observe NN interval directly. Thus, we use the mean of the heart rate over 60 s (heart rate over the course of 60 s divided by 60). Consequently, we define the relax rate as the standard deviation of the mean of the heart rate interval over 60 s. The relax rate is similar to SDNN and is used to measure stress. Generally, the lower the HRV value, the higher the degree of stress. Therefore, in our research, the lower the relax rate value, the higher the degree of stress.

Computer Logs and Multitasking Rate. We analyze how users multitask and define the multitasking rate as read by computer logs. Logs have the starting time of the active window and include the name of the application or a URL. We calculate the times of switching windows from the logs. Our concept is that the more frequently a user switches the active window, the more that user is multitasking. MR, NA and SW refer to the multitasking rate, the number of applications (and URL, if user is browsing), and the number of times of switching windows, respectively. Then, we define an equation, \(MR=\sqrt{NA*SW}\) For example, if we browse three pages and switch windows four times, the multitasking rate is \(\sqrt{3 * 4} = \sqrt{12}\).

2.4 Visualizing Results on a Graph

We visualize the relax rate, the multitasking rate, and our analysis of the data on a graph.

We tracked the heart rate data and the logged computer activity of one participant over a period of six days. The participant installed our system on his laptop computer and he wore an activity tracker all day, except during taking a shower and charging the battery of the device. We monitored his activities and heart rate for most of the day. We performed an experiment in which our system attempted to detect negative multitasking and periodical negative multitasking routines.

The multitasking rate is plotted in Fig. 2b. According to the computer activity data (Fig. 1b), the user tends to perform multitasking between 19:00 and 20:00.

We detect multitasking activities and negative multitasking routines through observing six days of data gathered by our system. We should, however, consider external factors. For example, the participant in our experiment ate breakfast at 10:00 and dinner at 18:00. We can guess that the reason for a significant increase in the relax rate (HRV) is breakfast and dinner. Thus, we need to investigate whether external events, such as dinner or exercise, affect the results or not, even though they are separate from multitasking time.

Yet, we could also state that the multitasking activities influence on relax rate. We could assume that the user wants to relax after dinner by surfing the Internet (according to the logs, he often watches sports news). However, our system detects this routine as stressful. In fact, we suggest that he was not relaxed during this routine.

In addition, we also need to solve a problem related to logging. For example, in our experiment, we can observe that on February 4 the multitasking rate is very low. Our system, which uses Manictime running on Windows, logged a low number of activities. This occurred because the participant used a different OS on February 4. In the future, we intend to use other software programs (e.g., Kidlogger1) that work on various OSs (Mac, Android).

Graphical Interface and Feedback. We intend to collect more data and receive more feedback in order to improve the reliability of our system. Moreover, we are going to develop a graphical interface to visualize our graphs. We found that our results, such as those in Fig. 2c, f, are too complicated for the average user to easily comprehend, meaning they cannot be used to obtain precise feedback. Hence, we will try to reconsider requirement 1 or the way in which we show the results. Finally, we intend to experiment and research the extent to which users realize the nature of their habits (negative, periodic etc.), as well as evaluate the usability of our system.

Ophir et al. found through examining cognitive tests that heavy multitaskers tend to be distracted by irrelevant environmental stimuli [7]. In their experiments, participants viewed two consecutive exposures of an array of rectangles. First, they memorized an image, and next, they looked at a second image and pointed out whether or not a red target rectangle had changed from the first, while ignoring a blue distracting rectangle. Results showed that heavy multitaskers had less accurate selection than light multitaskers under given condition.

Mark et al. investigated the relationship between computer and mobile activity [5]. Participants installed a logging software (Kidlogger [12]) and logged their computer or smartphone activities. They also wore heart rate monitors to collect heart rate variability, which is a measure of stress. The authors found a positive relationship between window-switching frequency and stress.

Dabbish et al. suggested that self-interruption increases depending on the external environmental [8]. They found that people in open office environments interrupt themselves frequently.

Digital media multitasking is increasingly common and can negatively affect user memory and concentration. We consider periodic multitasking as having a particularly strong negative influence. In response to this issue, we created a system that detects multitasking routines and visualizes the results of analysis to users. By seeing the results, we believe that users can become aware of the negative impact on their health and possibly give up their negative routines. Our system is effective in the detection of multitasking activities; however, we feel it can be improved further. In our future work, we will gather feedback from more users and analyze their observations and the data we obtain from them.