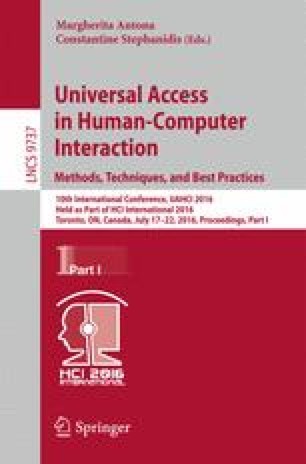 Density of Gaze Points Within a Fixation and Information Processing Behavior

Eye movements can provide valuable data about a user’s viewing behavior, and as such, the analysis of eye-movement data is becoming increasingly popular in human computer interaction (HCI) research [1, 2]. For example, fixations can provide invaluable data about a person’s attention, awareness, and information processing behavior [1, 3]. Fixations refer to relatively stationary gazes during which we take “foveal snapshots” of interesting stimuli. These foveal snapshots are then sent to our brain for processing [1]. Thus, fixations form a fundamental unit of analysis in examinations of eye-movement data [3]. In this study, we examine one particular property of this important eye-tracking metric, namely its dispersion, or the density of the individual gaze points that form a fixation event. Because fixations are reliable indicators of cognitive processing [4], the distribution of gaze points within a fixation unit is likely to carry information about the intensity of cognitive processing. Fixation density represents both the number of gaze points, as well as their dispersion, during a certain fixation event. In this study, fixation density is computed as the number of gaze points within a fixation unit (event) divided by the area of the minimal bounding rectangle. A dense fixation unit is likely to represent more intense cognitive processing. Given this point of view, we expect to observe that gaze point density in a fixation is related to a number of known eye-movement metrics that represent cognitive processing, namely fixation duration, pupil dilation [5], and pupil dilation variation [6, 7].

Recent developments in eye-tracking technology have made it possible to capture a user’s experience of a system through the analysis of eye movement data. Researchers in the field of Information Systems, Psychology, and Human Computer Interaction have been using eye-movement data to investigate users’ attention, awareness, search behavior and preferences in a variety of ways [8, 9].

Eye-tracking data have also been used to discover user’s cognitive states [10, 11, 12]. Understanding the relations between eye movements and human cognition has been useful in many domains such as studies of visual working memory [13]. Poole and Ball [3] identified different categories of eye-movement metrics, each reflecting the action of specific cognitive processes in the brain. These metrics include fixations, saccades, and pupil dilation. Fixations are defined as relatively stable gazes between saccades, and their interpretations differ depending on the context. Saccades are rapid movements of the eye when moving from one fixation to another [14]. There is evidence that cognitive load is likely to impact the length of fixation. A previous study using fixation data to find the correlation between a user’s gaze and difficulty of the task shows a positive correlation between fixation duration and cognitive load [15]. Building on Just and Carpenter’s [17] work, analyses based on the eye-mind assumption suggest that eye fixations can be used as a window into instances of effortful cognitive processing.

Fixations and saccades reflect very different types of eye movements. Fixations are related to information processing, whereas during saccades, visual information is not processed. Grounded in this distinction, a recent study discriminates between pupil data during fixations and saccades [7]. Because visual information is not processed during a saccadic event, in this paper, we focus on pupillary information during fixations only. Table 1 summarizes the eye-movement types and their respective metrics that were considered in this study.
Table 1.

Definition and application of different eye-tracking metrics used in this study as a representative of cognitive processing.

As shown in Table 1, longer fixations have been associated with a greater degree of attention, and thus more intense processing. Therefore, we expect to see that denser fixations have a significant relationship with fixation duration:

Pupillary data are known to serve as reliable proxies of cognitive processing [5], thus it is reasonable to argue that a fixations’ gaze density and its corresponding pupillary data have a strong correlation. Thus, we assert:

The following sections provide a brief review of the laboratory experiments that were conducted to test our hypotheses.

A total of 24 graduate students from various technical disciplines (e.g., computer science, electrical and computer engineering) in a northeastern university of the US were recruited for this study. Participants were assigned to complete a problem-solving cognitive task without any time limit. Because students are accustomed to taking timed tests, this setting was relevant and appropriate for manipulating cognitive load in our study.

We used the Tobii X300, a remote eye tracker with a sampling rate of 300 Hz and Tobii software version 3.2.3 to collect participant’s eye-movements data. The I-VT filter was used with 30°/s saccadic velocity threshold. To track eye movements, each participant completed a brief eye-calibration process. While seated, participants were asked to observe a moving dot on the eye-tracking monitor. This calibration process, which required participants to follow the moving dot on the screen, took less than one minute.

The problem-solving task used in this study required participants to provide correct answers to a set of mathematical questions. A set of 10 math questions were manually selected from a pool of problem-solving practice tests for the GRE cite available at www.majortests.com. The questions were then used to develop an online multiple choice math test.

Mean and Standard deviation of variables under study

Because fixations are a collection of gaze points that are close to each other in time and proximity, denser fixations represent a user’s more focused attention, and thus a higher level of cognitive processing when viewing visual stimuli. Therefore, it is likely that fixation density is related to other eye movement metrics that are representative of a user’s information processing behavior. In this paper, we investigated whether fixation density was correlated with three different eye metrics that are typically used to assess cognitive processing. Our results showed that fixation density was strongly correlated with pupil dilation variation and normalized fixation duration but not with pupil dilation. These results are consistent with prior research that indicates pupil dilation variation may be a more sensitive measure of information processing in HCI research [7]. Overall, the results provide evidence that fixation density, along with pupillary data, may also serve as an appropriate measure of information processing. These results have important implications because they provide a theoretical direction for incorporating fixation density in future HCI studies.

As with any experiment, our study had limitations, which we intend to address in follow-up studies. Our sample size was small, and the task was limited to a problem-solving cognitive task. Another limitation in our study was that the area for fixation was governed by a rectangle rather than a convex hull. Future studies are needed to replicate our analysis with larger sample sizes, different tasks, and convex hull as the area for fixation to increase confidence in the generalizability of our results.