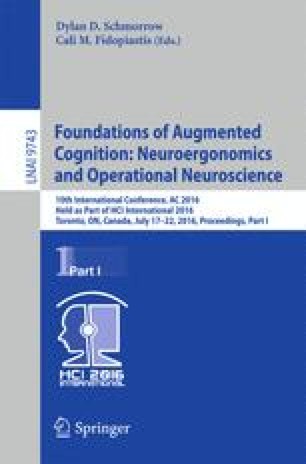 Overloaded and Biased? Using Augmented Cognition to Understand the Interaction Between Information Overload and Cognitive Biases

Virtual teams have been increasingly utilized in today’s organizations over the past decade, and they are now commonplace in today’s organizations [1, 2]. Virtual teams enable team members to be either spatially or temporally dispersed, yet able to readily communicate and solve problems [3]. Generally, virtual teams communicate via different forms of technology [4, 5, 6, 7], including videoconferencing, email, online chat rooms, and instant messaging (IM). These different modes of communication vary in richness and synchronicity, providing flexibility in the way virtual teams communicate [8, 9]. These technologies enable certain process gains, such as the elimination of production blocking and increased anonymity [10]. However, despite these gains, decades of research has shown that: virtual teams come to no better decisions than face-to-face teams and this problem exists at the level of individual information processing [11, 12].

The decision making process is a dynamic process involving multiple decision factors [14]. The pros and cons of each factor must be considered to reach an optimal decision [14]. Prior research has identified unique challenges in team decision making especially due to negotiating multiple opinions [15, 16, 17]. Other factors found to affect team decision-making processes include cognitive processes [15, 18], cognitive anchors [15, 19], and the desire to stick to prior decisions [15, 20].

Our goal in this study is to understand how individual team members respond to new information they receive from other team members during a text-based ICT discussion in varying information load conditions. Therefore, the unit of analysis will be the individual, not the team. Given this focus, having real participants interact with each other and measuring the data at the individual level would introduce large error variance, because each team discussion is likely to be different. Therefore, we will use a simulator [see, 12, 43, 44] designed to look and act like a real Instant Messenger (IM) tool. The study participant can type comments in the simulator and see them contributed to the discussion. The simulator will present participants with a standardized script based off of a real-world virtual team discussion. In order not to bias the outcomes, participants were not informed that they were using a simulator until the end of the experimental session.

Participants will be undergraduate students from a state university who will receive course credit for their time. We aim to collect data on 40 subjects in a repeated measures design.

We will use three hidden profile decision making tasks. In each task, we will ask the participants to select three of five fictitious student applicants to admit to the university. This task is based on one used extensively in prior research [e.g., 11, 45]. It has the advantage of being familiar to the participants, because each of them has successfully navigated the university entrance process and understands the task information (e.g., GPA, SAT). The version of the tasks we used are validated by the admissions office at the university where the experiment was conducted to ensure that the information it contained was appropriate.

Each task has two parts. First, the participant is given incomplete information about the five potential applicants and asked to make an initial decision of which three to admit. This corresponds to the pre-decision stage commonly encountered in decision making. Then the participant will be informed that they will work in a team with four other participants using a text-based discussion tool to discuss the information and reach a team decision that could be the same or different from their initial decisions. Participants will be informed that each team member has received incomplete information. Some common information is known to all team members but each team member had been given unique information that is known only to them, and that it was important to share this unique information and consider the new information contributed by others in order to reach a good decision.

The independent variable is the nature of the information contained in the simulator script displayed to the participants, with five levels explained below. The scripts were written to closely match the transcripts of discussions from student teams that had performed this task in prior experiments.

In the low, medium, and high information load treatments, we will vary the amount of the five types of target statements to increase information processing requirements on the participant.

Our dependent variables are cortical alpha wave activity, autonomic arousal, and emotional valence. These are operationalized using neurological and psychophysiological measures. EEG measures will be collected using a 14-channel headset (Emotiv Systems, San Francisco, CA, USA) with electrodes dispersed over the scalp along the 10–20 system [46] (see Fig. 1). The electrodes will make connection with the scalp surface via felt pads saturated in saline solution. The reference electrodes will be located at P3 and P4 over the inferior, posterior parietal lobule [46]. All other channels will be measured in relation to the electrical activity present at these locations, sampled at 128 Hz. Impedances will be verified and data collected using Emotiv TestBench Software Version 1.5.0.3, which will export it into comma-delimited format for subsequent analysis.

Autonomic arousal will be operationalized as skin conductance level measured with disposable electrodes filled with electrically neutral gel and adhered planar surface of the foot. A Biopac MP150 system will be used to collect the skin conductance data at 1000 Hz. Emotional valence will be operationalized as the relative activation of the corrugator supercilli muscle group (facial EMG). Corrugator EMG will be measured using a pair of mini (4 mm) reusable AG/AGCL electrodes filled with electrolyte gel placed above the subject’s left eye after dead skin cells has been removed by a skin prep pad containing rubbing alcohol and pumice. The bipolar corrugator measures will be collected using the Biopac MP150 system with high pass filters set at 8 Hz. The full wave signal will be rectified and then contour integrated online at a time constant of 100 ms, and then sampled at 1000 Hz by the Biopac MP150 system.

Participants will be seated in a high back chair to minimize movement. They will be provided a standard keyboard and a mouse. The experimenter will then explain the procedure for attaching the physiological electrodes and fitting the EEG cap, answering any questions posed by the participant. After obtaining adequate impedance readings for the EDA, EMG and EEG measures, the protocol will continue with another brief handedness questionnaire.

EEG data will be cleaned and analyzed using EEGLab [47]. One limitation of EEG is that cortical bioelectrical activity is extremely small in magnitude when compared to muscle movements across the head. Therefore, participant movement introduces artifacts of high-frequency and magnitude into the EEG data. These will be removed using two methods: EEGlab probability calculations and visual inspection. The EEGLab artifact rejection algorithm uses deviations in microvolts greater than three standard deviations from the mean to reject specific trials. However, additional artifacts are also apparent to the trained eye, so visual inspection of trials is essential in artifact removal [47].

In addition to trial-by-trial removal of artifacts, occasionally specific EEG channels must be rejected in an individual subject’s data due to unacceptable impedance levels. This can be done in the current study using an automatic impedance detection feature of EEGLab.

Electrodermal and facial EMG data were aggregated to mean values per second using Biopac’s Acqknowledge software. Change scores will be calculated by subtracting the physiological level at the onset of each target statement during the online discussion from each subsequent second across a 6-s window.

The first step of the EEG analysis will be an Independent Components Analysis (ICA) at the individual level. A common problem in neurophysiology research results from the collection of large amounts of data which, based upon the Central Limit Theorem, become normally distributed. However, the brain is comprised of discrete patches of cortex that are very active at some points in time and relatively non-active at others (i.e. – activity is not normally distributed across the scalp) [48]. ICA overcomes this problem by taking this Gaussian data and rotating it until it becomes non-Gaussian, thereby isolating independent components of activation. The ICAs are distributed patterns of activation across the 14-electrodes in the EEG system.

Initially, an EEGLab ICA performs a Principal Components Analysis (PCA). At each electrode site the program assesses which of the other electrode sites account for the most variance in the signal. Taking these weighted values it then relaxes the orthogonality constraint of PCA to isolate individual components of activation [48]. Each ICA component then represents a pattern of activation over the entire brain, not solely the activity present at a specific electrode. The number of independent components (ICs) depends on the number of electrodes in the dataset, as the algorithm is working in an N-dimensional space (where N is the number of electrodes). Most participants in the current study are expected to generate 14 distinct ICs, since our recording device has 14 electrodes.

Finally, using the K-means component of EEGlab the independent components at the individual level will be grouped into clusters containing similar components using procedures recommended by [49]. This procedure clusters similar ICs based upon their latency, frequency, amplitude, and scalp distribution [49]. Relevant clusters will be identified and a time-frequency decomposition will be performed to examine changes in event-related desynchronization of the alpha rhythm.

This study seeks to elucidate whether confirmation bias and information load are mutually exclusive or mutually related. We examine cognitive and emotional changes present at the individual level in a virtual team interaction to understand how information load affects processing of different types of information. We believe the findings of this study have several implications for understanding virtual team interactions.