Human Aspects of IT for the Aged Population. Healthy and Active Aging 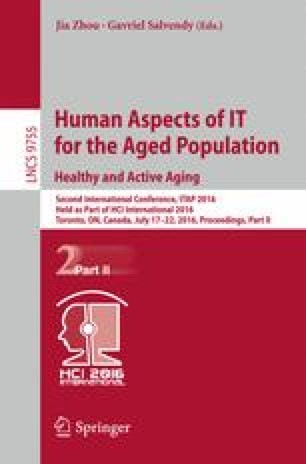 International Conference on Human Aspects of IT for the Aged Population

Information Technology machines as MFPs (Multiple Function Printers) and ATMs (Automatic Teller Machines) with complicated functions require better user assistance, particularly for elderly people. It is necessary to reduce psychological loads such as a sense of insecurity or impatience in operation, as well as the cognitive load.

This study focuses on enhanced operational rhythm to reduce psychological load on the elderly when using MFPs, which require the user to navigate between quite a few settings. Evaluation was carried out by observing elderly subjects and middle-aged subjects using MFP interfaces whilst hearing an audio rhythm at a Tempo of 40, 60 and 120 bpm (beats per minute).

These days, many people are required to use multifunction machines such as ATMs (Automatic Teller Machines) and MFPs (Multiple Function Printers). Since they are becoming more and more complex with many services and functions, the elderly especially have difficulties in using such equipment.

Since elderly users have expressed their concerns and requests for improved usability, IT equipment should provide better assistance and usability for elderly people.

In order to achieve this objective, it is necessary not only to reduce cognitive load, but also to reduce psychological load, such as a sense of insecurity or anxiety, because these factors trigger operational errors.

Voice guidance is often used as a method for providing operational assistance; however, the guidance speed used can cause negative psychological impacts on users when it is too fast or too slow, depending on how fast users can process the voice guidance [1]. Moreover, when the time taken for the display to respond to an input is faster or slower than user expectations or physiological and cognitive speed, it can cause negative psychological impacts [2]. This impact, it is believed, occurs because of a disrupted operational rhythm. For instance, in the operation of an ATM that requires a lot of input, such as the bank and branch name in a step-by-step process, it has been observed that users operate the system at a certain rhythm during normal smooth operation [3]. Therefore, Akatsu et al. propose a hypothesis for simple assistance that aims to provide step-by-step interface and operational rhythms in order to reduce user psychological load and to allow users to conduct operations at their own pace without presenting information such as voice or visual guidance [4]. Their study focuses on operational rhythms to reduce user psychological load when using an MFP which requires many operation settings. The operational rhythm was created with a metronome, and the effects of the rhythm on elderly subjects were measured.

In this previous study, we (Akatsu et al.) designed the new ATM interface for elderly users based on cognitive aging [5]. This ATM provides a step-by-step interface and voice guidance. Thanks to this new interface design, elderly users were able to operate them more successfully, and the number of time-outs (system reset due to lack of user response) following operation errors decreased.

When developing this ATM interface, we conducted usability testing. We found that in ATM processes which require a lot of user input, for example bank and branch names, when a user completes them smoothly, they tend to follow their own individual rhythm. Figure 1 shows the remittance amount input screen. When the ATMs voice message says “The amount is 65,000 yen, is it OK?”, the elderly users would reply “Yes, it is Ok” as they push the button. It was just like they were responding to a real person. The voice message created an operational rhythm which elderly users could easily identify and follow.

Rhythm is important in assisting elderly users, and this led us to experiment using an actual rhythm or beat instead of a voice message. We aimed to study the effects of simple assistance combing a step-by-step interface with operational rhythms.

Our previous study focused on “operation rhythm” as a method for reducing user psychological load when operating an MFP, which requires selection of many copy functions. Operation rhythms were created and the effects of these rhythms on elderly users’ MFP operation were examined [4].

Most Conventional MFP interface designs are similar to that shown in Fig. 2. As shown in Fig. 2, when the “One Side/Two side” button is pressed, secondary options appear in a pop-up window, from which the user chooses exact settings.
In our previous study, an interface system to set up basic photocopy functions for an MFP was created, which uses a step-by-step procedure instead (shown in Fig. 3). We changed to a step-by-step interface structure as this type of interface is easy for novice users. A rhythm was then played during the operational period.

Three rhythms created by a metronome were used, at the standard speed of Tempo 60, double-speed Tempo 120, and Tempo 40. The metronome was set by the side of the touch panel display.

Results showed that when a rhythm was provided for the elderly, they displayed a tendency to synchronize their operation with the rhythm. However, it was also indicated that a rhythm which is too fast can have a negative impact on the elderly’s operational ability. We also focused on psychological aspects via a questionnaire evaluation and interview, which suggested that better familiarity with the operation had a stronger effect than the metronome rhythm.

Therefore, in our new study, we ensured the elderly subjects were completely familiarized with operation, enabling us to accurately examine the impact of rhythm on their performance. For comparison, we used a group of subjects in their 30 s and 40 s who work in offices and are familiar with MFPs.

In this study, an interface system to set up basic photocopy operational functions for an MFP was created, which uses a step-by-step procedure (shown in Fig. 3). It is the same interface as in the previous study. However, this time the three types of rhythms were played through speakers next to the touch panel during the operational period.

The subjects were asked to operate the copy functions, and the effects of the rhythm were evaluated. The evaluation indexes are as described:

Figure 4 shows the experimental system. In this study, an experimental simulator where users sequentially set up MFP basic copy functions was prepared, as shown in Fig. 3. The subjects were asked to operate the simulator using a 15-inch display on a personal computer. Three rhythms were used at the standard speed of Tempo 60, double-speed Tempo 120, and Tempo 40. Rhythms were output from the speakers next the touch panel display.

All subjects were able to complete the tasks without any errors by the end of the practice period. They were all fully accustomed to operation. For this reason, there were no errors during the evaluated tasks.

However, as the subjective evaluation described later shows, the subjects felt some ambivalence at Tempo 120 when participating in a task they could accomplish under the other rhythm conditions, although they did not commit significantly more errors.

Even if the elderly and the middle-aged subjects were familiar with the operation, too fast a rhythm was shown to have a negative impact on the subject’s psychological state.

Figure 5 shows the results for overall time taken. The number of subjects is small but Statistical analysis was performed for reference. The Analysis of Variance (ANOVA) for Age (2) × Tempo (4), the results indicate a significant difference (F (1, 24) = 39.10, p < 0.01) among the age groups. The middle-aged group was faster than the elderly group. The significant difference between the ages was observed, but difference between tempo conditions was not observed.

Although a significant difference does not exist, as the tempo got faster, a tendency can be seen the overall time taken is shorter. In the previous study at Tempo 120, it was observed that the performance of most elderly subjects was disturbed, and the overall time taken increased [4]. However, when the elderly are familiar with the operation, the faster rhythm has less effect.

4.3 Psychological Evaluation on a Given Rhythm

After each tempo operation was completed, a survey was conducted for ten things; level of calmness, sense of security, ease in understanding the operation,, operational errors, etc., on a scale of one to six (e.g., Very calm: 6 → Not calm at all: 1).

Other factors (comfortable operation, operation at own pace) which significantly differed were mainly due to age, the elderly scores were higher than for the middle-aged.

In addition, in the interview after completion of the task, the elderly said that they felt the rhythm sound of Tempo 40 and 60 was not annoying and they could concentrate on operation of the screen. While they felt rushed by Tempo 120, they tried to match it, but could not. On the other hand, the middle-aged subjects that the rhythm was noisy and rushed them at any tempo. They operated the machine while ignoring the tempo.

So we can see, the elderly subjects were strongly affected by rhythm, but the opposite was true for the middle-aged subjects. It was considered that middle-aged are more familiar with the operation than the elderly and can complete the task more quickly. In fact, they avoid the influence of external factors, and they were controlled by their own temperament.

This study focused on “operation rhythm” as a method for reducing user psychological load when operating an MFP, which requires selection of many copy functions. Operation rhythms were created and the effects of these rhythms on elderly and the middle-aged people’s MFP operation were examined. When a rhythm was provided for experiment subjects, the elderly displayed a tendency to synchronize their operation with the rhythm. On the other hand, the middle-aged tended to display more control and try to operate the machine at their own rhythm.