Human Aspects of IT for the Aged Population. Design for Aging 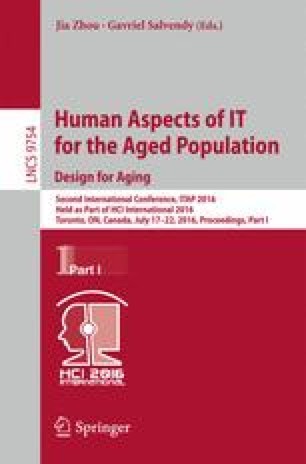 International Conference on Human Aspects of IT for the Aged Population

Mental workload is a crucial issue of the ergonomic research for human mental work. In general, the wide-accepted assessment and measurement of the mental workload mainly include the following 4 methods: subjective questionnaires, physiological measures, performance or errors, and task-performing-related body actions measure. However, each of them could only reflect one aspect of the human mental states. In some respects, there are a number of limitations for the intrusiveness and discontinuity in these methods (O’Donnell and Eggemeier 1986; Wierwille and Eggemeier 1993; Meshkati et al. 1995; Farmer and Brownson 2003; Cain 2007). The results of some previous studies indicated that the specific facial muscle activity are correlated to mental status (Veldhuizen et al. 2003; Capa et al. 2008). Based on the performance and error for workload measurement, the performance of both primary and secondary tasks has been analysed. The performance of primary and secondary tasks is dependent on the strategy of task performance. O’Donnell and Eggemeier (1986) pointed out that underload may enhance performance and overload may result in a floor effect. Task-performing body behaviour only reflects the input to and the output from the person, rather than the entirety of internal activities in the brain. Moreover, the effect of the workload on an operator in a mental work setting is generally interpreted by the integration of all of the measurements used.

With gradually increasing automation in the human-machine system, the role of an operator has been moved to supervisory controller from manual worker (Sheridan 1987). Hence, motor actions of the operator are being gradually decreasing and may only be episodic, while sensory-perceptual and mental activities are increasing (Bedny and Karwowski 2006). Thus, it can be difficult to observe task-performing body behaviors in such work settings due to their infrequent occurrence. Hence, the total activity (both mental and external activities) of the operator would not be entirely revealed if only their sensory-motor actions were analysed. Currently, the analysis of actions directly involved in the test tasks, such as eye movements and gross motor actions, have been widely and comprehensively accepted for workload assessment. Non-task-performing and nonverbal body behavior (e.g. face behavior) occur to accompany and support task-performing body behavior. Although human-machine interaction is different from human-human communication, nonverbal behavior can be elicited by machines during human-machine interaction in the close-loop human-machine system, which is similar to human-human communication (King 1997). Hence, the same behavior in terms of rates for tasks and types can occur as in human-human communication, where facial expression is the most innate (Argyle 1998, cited from King 1997). Furthermore, as Feyer (2007) concluded that both task performing and non-task performing body behaviours (activities) makes an influence on the interactions and human performance. Also, observable body behaviour can reflect mental processes (Keijze 2005). To date, face behavior, as one part of body behavior, has not gained much interest in workload assessment in mental work settings. The studies of King (1996; 1997) are relative early for the effect of cognitive activity on facial expression. King (1997) made a survey of facial expression in human-computer systems. The results showed that rates of facial expressions were higher for computer-based tasks. Based on his study, King (1996) argued that facial expressions were related to cognitive activities based his study. In the model of Guhe et al. (2006), mouth openness is a parameter for the predictor of mental workload. Recently, a study by Stone and Wei (2011) indicated that facial expression can be a effective index of workload for arithmetic tasks. They used FACS (Facial Action Coding System) approach by Ekman and Friesen (1978) to code face behavior. However, this face coding approach needs a well-trained coder and is very time-consuming. Meanwhile, the relationships between the facial muscle activity and workload were investigated in previous studies. The results of these studies indicated that the specific facial muscle activity are correlated to mental status (Veldhuizen et al. 2003; Capa et al. 2008). They showed indirectly the correlation between face behavior and workload in the mental settings.

A total of 10 subjects (male, mean age: 22.4 years, SD of age: 1.1 years) were recruited for the study from our university setting. They were all right-handed and have various experience on computer games. And all of them reported that they had no mental or physical health problems or diseases.

The data of the face behavior and the upper body skeleton is captured by Kinect, a low-cost sensor could be a tool with continuous, and supplementary approach function. There were two Kinect sensors were used to capture body behavior, one for face behavior and the other for upper body behavior. The data includes the rotational position of the head, 6 Animation Units (AUs), 11 Shape Units (SUs), the distance of the palpebral superior and the palpebral inferior and the angle of the upper body and the level ground with respect to the gravitational field.

The experimental procedure started with an explanation of the tasks and the procedure to each subject. First, the subject was required to fill in a biographical questionnaire. Then, the subject was seated on the chair and asked to find his/her normal seating position for working in front of the display by moving the table and adjusting chair or display. The subjects practiced the four tasks until achieving a constant performance. After the training period, the subjects were asked to fill out a questionnaire regarding their state of mind using the positive affect/negative affect scale. Each task lasted 4 min. The 4 tasks were performed by the subjects. The order of tasks was randomized for each of the subjects. At the end of the experiment, the subjects were asked to assess their state of mind again.

As mentioned earlier, a Kinect sensor is very low-cost compared with other commercial tools for face behavior analysis. The Kinect sensor can track the head pose and face behavior. A right-handed coordinate system is used to quantize tracking results1 in the Kinect. The origin of the coordinate system is located at the Kinects optical center. Z axis is pointing towards a user and Y axis is pointing up, as Fig. 3 shows. The X, Y, and Z position (rotation and translation) of the users’ head are captured as well based on the Kinect coordinate system. 87 two dimensions and 13 additional points on the face can be tracked. A Kinect sensor can also provide a subset defined in the Candide3 model2, which are weights of six Animation Units (AUs) (Fig. 4). The means and SDs of AUs of each task levels were used for statistical analysis.

The distance between upper and lower lids and the angle of spine has been calculated in current study as two parameters.

Neural Network Toolbox provides functions and apps for modeling complex nonlinear systems that are not easily modeled with a closed-form equation. In the current study, we use the neural network pattern recognition tool in Matlab software and the neural net fitting tool to analyze data, and the statistical analysis was performed using SPSS 21 software with the significance level set to 0.05. The Repeated Measurement Test was used to analyze the recognition rate on subjects.

Using the neural net fitting, the relationship between the facial behavior and the workload calculated based on the NASA-TLX be fitted perfectly, as Fig. 5 shows.

The link between human behavior and mental workload for four mental tasks completed on a computer were studied. In the neural net pattern recognition, according to the confusion matrix, the correct recognition rate of the task difficulty with the face expression could be 90 % above (shown as Fig. 5). All of recognition rates were over 90 %. From the Fig. 5, it can be observed that average rate in DEXT task was greater than those of the other tasks. Analyzed by Repeated Measurements, there is no statistically significant difference among the tasks for the recognition rate. However, recognition rates were significant differences amongst individuals. (F = 24202, p = 0.0000).

Although previous literature of mental workload indicated that workload measurement could be described with directly and contiguously observable non-task-performing behaviors, the workload measurement still has a few challenges. In the present study, the relationships between task difficulties and human behavior were studies during simulated mental tasks. Except for the upper body behavior, the body behavior should be studied more in its entirety to measure workload, e.g. the subjects’ shoulder breadth while they were working will be a feasible parameter. The results of the present study show that the differences in human behavior were well discernible for midrange workload levels. It shows the possibility that non-task-performing behavior is nonlinearly correlated with workload as Bedny et al. (2000) indicated. To rich the method for measuring workload through body behavior analysis, further research is required.

In this study, the relationships between human behavior and task demand were investigated using the Kinect-base tracking method. Facial expression and upper body skeleton were quantitatively analyzed using a video-based analysis system. In the neural net pattern recognition, according to the confusion matrix, the correct recognition rate of the task difficulty, could contain a high level, and the relationship between the facial behavior and the workload calculated based on the NASA-TLX be fitted accurately by the neural net fitting. The result indicates that the relationship between human behavior and mental workload could be described well in a non-linear model. Based on these findings of the current study, human behavior may be used as an indicator of the workload in mental work settings. It is recommended that different levels of the same type of mental task be used in further research to develop a supplementary method for workload assessment based on human behavior.